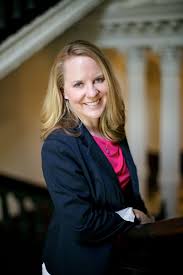 Stephanie Simpson is the Director of State Government Relations at Sanofi US, a global biopharmaceutical company. Prior to joining Sanofi, Stephanie served as Vice President of the  Texas Association of Manufacturers, an Austin-based industry state trade association representing  more than 500 manufacturing companies across Texas.

Stephanie began her career in policy after interning for Senator Majority Leader Robert Dole (R- Kansas). She worked as a Finance Director on judicial, legislative, congressional, and issue based- campaigns before focusing her career on advocacy. Achieving diverse experience in state and federal politics, Stephanie is well versed in public policy and grassroots coalition building.

In her spare time, Stephanie serves on the Board of Directors and Executive Committee (Past President) of the Wine & Food Foundation of Texas, serves on the Austin Crime Commission, was named runner-up for the Leukemia Lymphoma Society’s 2015 Woman of the Year, and chaired the 2014 American Widows Project Legacy of Light Gala.

Stephanie received her Bachelor of Science in Journalism and Mass Communication from Kansas State University, and went on to earn a Master of Business Administration from St. Edwards University. Stephanie is married to Chad Simpson and resides in Austin, TX.