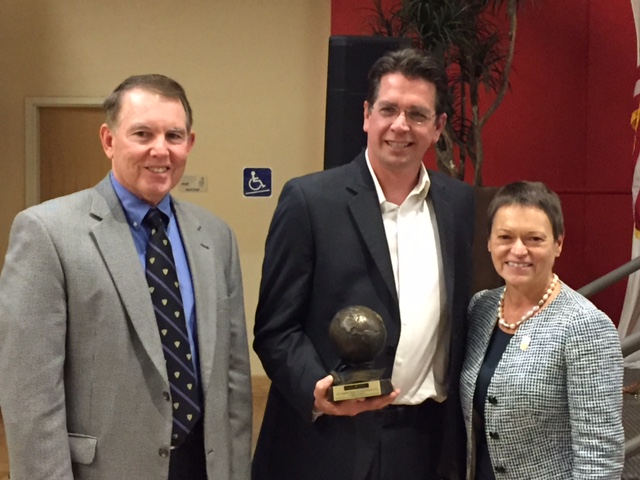 “This recognition by the Arizona Board of Regents is most welcome and reflects the hard work and ingenuity of countless researchers and students at both TGen and NAU,” Dr. Keim said. “Through our joint NAU-TGen research, we are continuing to develop tools and technologies that have a great impact on human health.” — Dr. Paul Keim

PHOENIX, Ariz. — Nov. 20, 2015 — The Arizona Board of Regents presented the Translational Genomics Research Institute (TGen) with its 2015 Regents’ Award for Outstanding Service to Higher Education, recognizing the extensive research TGen has conducted in association with Northern Arizona University (NAU).

The award was presented at a Board of Regents dinner Thursday at the University of Arizona. The award was established in 1996 to recognize groups or individuals who make important and lasting contributions to the higher education system in Arizona.

TGen’s Pathogen Genomics Division in Flagstaff, or TGen North, works hand-in-hand on numerous scientific investigations with NAU’s Microbial Genetics & Genomics Center (MGGen), studying ways to bolster the nation’s biodefense, and to prevent outbreaks — even pandemics — of such contagions as flu, cholera, E. coli, salmonella, and even the plague.

TGen North and MGGen are both directed by Dr. Paul Keim, TGen Professor and Cowden Endowed Chair of Microbiology at NAU, and a world-renowned expert in anthrax and other infectious diseases. Under his guidance, NAU undergraduates and graduate students gained invaluable experience on the way to launching their careers.

“This recognition by the Arizona Board of Regents is most welcome and reflects the hard work and ingenuity of countless researchers and students at both TGen and NAU,” Dr. Keim said. “Through our joint NAU-TGen research, we are continuing to develop tools and technologies that have a great impact on human health.”

Three patents have been awarded jointly to TGen and NAU, and 26 are pending. One of the patents is for a set of genetically based tests that accurately identify fungal pathogens that threaten public health worldwide. These tests allow for real-time analysis in labs, clinics, physician offices, emergency rooms and even field settings. They have great potential for saving lives and lowering health care costs.

Another patent is for a test that can detect, and assist in the treatment of, the H1N1 pandemic flu strain. The test quickly informs doctors about the strain of flu that is present and whether it is resistant to anti-viral drugs.

“The strong collaboration between TGen North and NAU is a prime example of what can be accomplished through close, synergetic efforts that compliment the best attributes and expertise of each institute,” said Dr. Jeffrey Trent, TGen President and Research Director.

NAU President Rita Cheng praised TGen and Dr. Trent: “Since its founding in 2002, TGen has grown to become a cornerstone of Arizona’s influential bioscience sector, in no small part due to the vision and leadership of Jeff Trent. I thank him for his foresight in appreciating the value of Arizona’s regents’ institutions as research assets and centers of knowledge.”

“With this great TGen-NAU partnership, we are translating advanced education directly into advanced research and, in turn, directly into advancements in human health. We are grateful for this relationship and look forward to creating even more positive outcomes together,” said Dr. David Engelthaler, TGen Associate Professor and Director of Programs and Operations at TGen North.

The Arizona Board of Regents is the governing body of Arizona’s public university system, providing policy guidance to Arizona State University, Northern Arizona University, the University of Arizona and their branch campuses.

“Nominees for this year’s Regents’ Awards for Outstanding Service to Higher Education were exemplary,” said Regent Ram Krishna, vice-chair of the Regents’ Award Nomination Committee. “TGen demonstrates the tremendous power of collaboration with Northern Arizona University as well as the impact of the biosciences on Arizona’s economy and the health of its citizens. It is our honor to give this award to TGen.”

TGen was nominated for the Regents award on NAU’s behalf by former Regent Jack Jewett, now President and CEO of the Flinn Foundation.