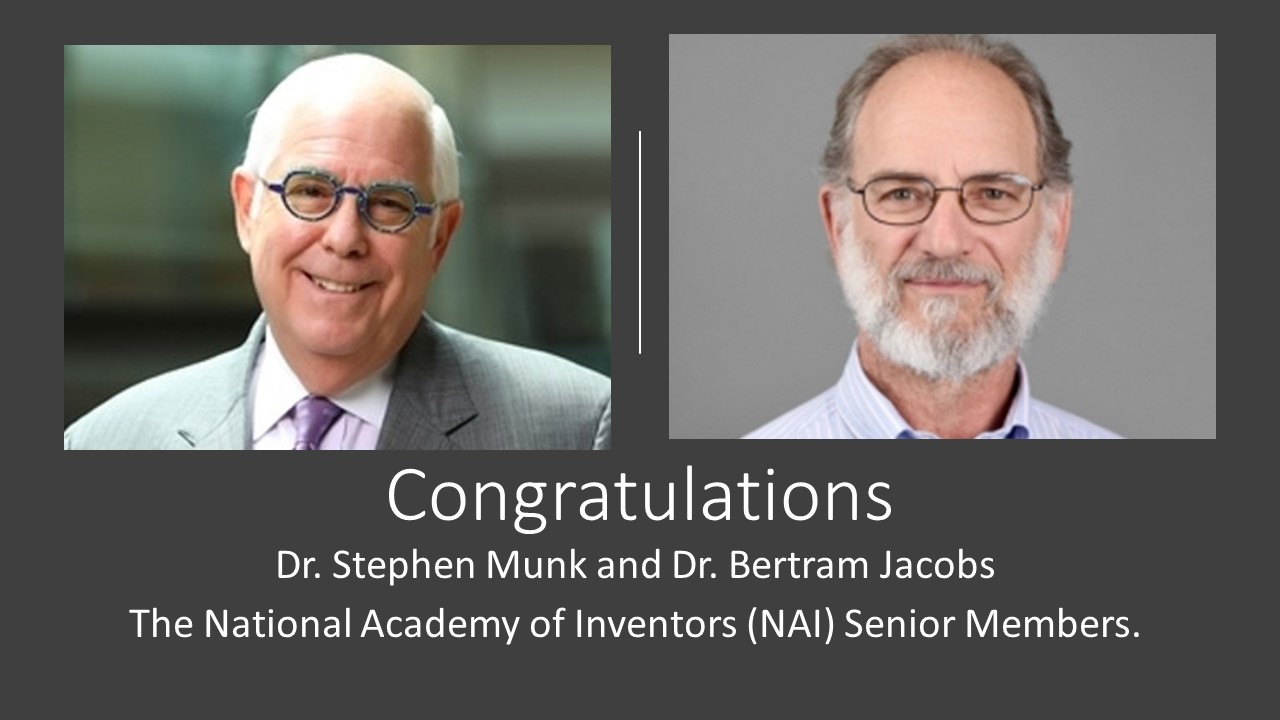 This coveted distinction within NAI, an international organization, recognizes engineers, scientists and others whose innovative work has resulted in technologies with the potential for widespread benefit to society.The National Academy of Inventors has named Arizona State University Professors Stephen Munk and Bertram Jacobs to the February 2022 class of senior members.

In announcing this year’s recipients, the organization’s president and NAI Fellow Paul R. Sanberg said, “The caliber of this year’s class of NAI Fellows is outstanding. Each of these individuals are highly regarded in their respective fields. The breadth and scope of their discovery is truly staggering. I’m excited not only see their work continue, but also to see their knowledge influence a new era of science, technology and innovation worldwide.”

Munk joined the Biodesign Institute at ASU as its deputy director in October 2017. His extensive experience in drug discovery, development and manufacturing, both as a scientist and as a manager, has helped advance ASU’s ambitious efforts in the arena of human health.

Formerly, he was the CEO and president of Ash Stevens, Inc., a full-service active pharmaceutical ingredient (API) development and manufacturing organization, where he developed a reputation for rapid development of life-saving pharmaceutical drugs and acquisition of FDA approval.

During Munk’s tenure, Ash Stevens received 12 FDA manufacturing approvals and six NIH research contracts, including four competing contract renewals. Prior to joining Ash Stevens in 1997, he worked at Allergan, Inc., initially as a medicinal chemist and subsequently as the co-team leader of the adrenergic drug discovery team.

Since joining the Biodesign Institute, Munk has been a vital force driving the strategic, business and technical operations of one of Arizona’s largest bioscience research infrastructure facilities. His combination of managerial skills and scientific expertise have been instrumental in helping ASU maintain and advance its reputation as the No. 1 school for innovation, a distinction it has received from U.S. News & World Report for the seventh straight year.

“Seeing one’s work commercialized to help people validates the vision of using science to better the human condition,” Munk said. “It is a real honor to have that effort recognized through election to the National Academy of Inventors.”

Munk has served on the steering committee of the Chemistry in Cancer Research Working Group of the American Association for Cancer Research, serving as chairman in 2014; the board of directors of MichBio, serving as chairman from 2009–14; and various grant review committees for the federal government. In addition to numerous scientific publications, he is co-author of the 2016 book “Managing the Drug Discovery Process: How to Make It More Efficient and Cost-Effective.”

Jacobs is a researcher in the Biodesign Center for Immunotherapy, Vaccines and Virotherapy and a professor of virology with ASU’s School of Life Sciences.

He is one of the world’s foremost authorities on vaccinia, a member of the poxvirus family of viruses, closely related to smallpox. He has genetically engineered vaccinia as a vehicle against various infectious agents, bioterrorism threats and cancer, demonstrating that viruses are not only pathogens to be feared but can be put to the service of helping humanity.

Among his research endeavors, Jacobs has focused on what remains a central challenge for medicine: the development of an affordable and effective vaccine against human immunodeficiency virus (HIV). His lab has explored poxvirus-host interactions and the strategies these viruses use to successfully evade the body’s innate immune interferon defenses. Disabling immune evasion genes in vaccinia has produced highly attenuated strains of the virus for potential use as vectors against diseases including AIDS.

HIV continues its path of devastation, particularly in the developing world, where effective antiretroviral drugs are often unavailable. Some 37.7 million people were affected by the HIV virus in 2020.

“The creative process of invention is most fulfilling when it can serve human needs, especially in combatting the infectious diseases that continue to ravage humankind,” Jacobs said. “I’m deeply honored to be recognized by the NAI for these ongoing efforts.”

Jacobs has also assisted several HIV/AIDS-related support organizations, including serving on the board of directors for Aunt Rita’s Foundation, and on the advisory board for Support for International Change. He currently serves on the board of directors for HEAL International, a nonprofit organization he co-founded, dedicated to teaching public health and HIV/AIDS prevention in rural Tanzania. For many years, he has led a group of summer students to sub-Saharan Africa to teach AIDS prevention to the international community as well as educating local inhabitants about malaria, sanitation, nutrition and hygiene. The group also funds emergency medical support and provides financial aid for local women to start businesses that offer health services.