Neurosurgeons at Barrow Neurological Institute in Phoenix are involved with testing the viability of deep brain stimulation (DBS) to treat Alzheimer’s disease, a disorder that currently has few treatment options. Results from the Phase 2 study, reported in the Journal of Neurosurgery on
Dec. 18, 2015, demonstrated the safety of DBS in Alzheimer’s patients. 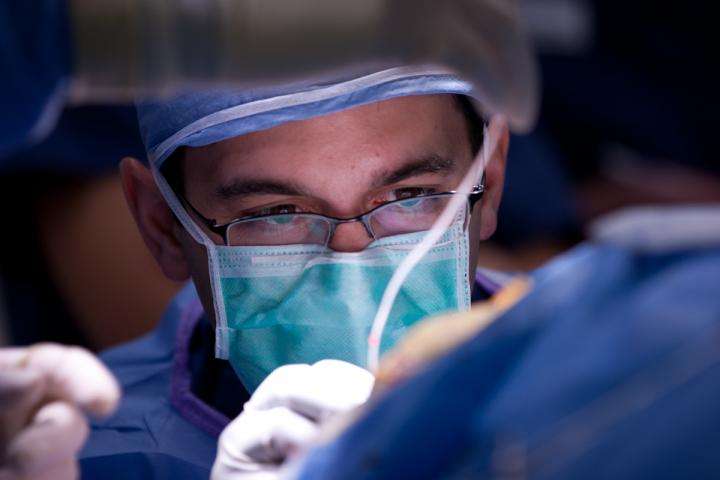 A neurosurgical procedure in which an implanted neurostimulator delivers electrical signals to specific areas of the brain to help regulate abnormal signals, DBS is currently only approved in the U.S. for the treatment of Parkinson’s disease and essential tremor. However, its use is being researched for a number of conditions, including epilepsy, depression and bipolar disorder. Francisco Ponce, MD, Director of the Barrow Center for Neuromodulation, believes there are potential applications for Alzheimer’s disease – the most common form of dementia – as well. Whereas in Parkinson’s disease and essential tremor, the target for the electrodes are nodes within the motor circuits, the Alzheimer’s study targeted the fornix, which is part of the memory pathway.

“There are more than five million Americans living with Alzheimer’s, and yet there are few promising pharmacologic treatment options for this progressive disease,” says Dr. Ponce. “Previous pilot studies researching the use of DBS in Alzheimer’s have indicated the potential to slow cognitive decline in some patients, and have even shown metabolic changes in the brain that may slow the progression of the disease.” Barrow Neurological Institute is part of Dignity Health St. Joseph’s Hospital in Phoenix.

The ADvance Trial, using a device from Functional Neuromodulation, Inc., is aimed at evaluatingthe safety, efficacy and tolerability of DBS in this patient population. Initial research took place between 2012 and 2014 at six hospitals throughout the U.S., including Banner Alzheimer’s Institute in Phoenix and Banner Sun Health Research Institute in Sun City, as well as one institution in Canada. During the trial, 42 patients with mild Alzheimer’s disease underwent the surgical procedure and were closely monitored for adverse effects.

Overall, there were no programming-related adverse effects, unanticipated adverse device effects, reported neurological deficits or instances of mortality in the study population. Adverse effects such as headache and infection occurred in 11.9% (5 of 42) of the patients in this study, consistent with rates reported in other DBS trials.

“The first phase of this study was designed to evaluate the 90-day postoperative safety of this particular surgical method. While the study was relatively small, we believe the data suggest that
DBS surgery targeting the fornix can be performed safely in this patient population. The hope is that our positive surgical experience will help pave the way for future research into DBS and Alzheimer’s,” says Dr. Ponce.

Dr. Ponce adds that the next step is evaluating the efficacy and longer-term safety of the treatment, which will not be known until the last patient completes the two-year evaluation later this year.