Developed by a research team at the University of Arizona College of Medicine – Phoenix, the self-collection device quickly can evaluate radiation exposure and help triage emergency treatment in the event of a nuclear attack or accident. 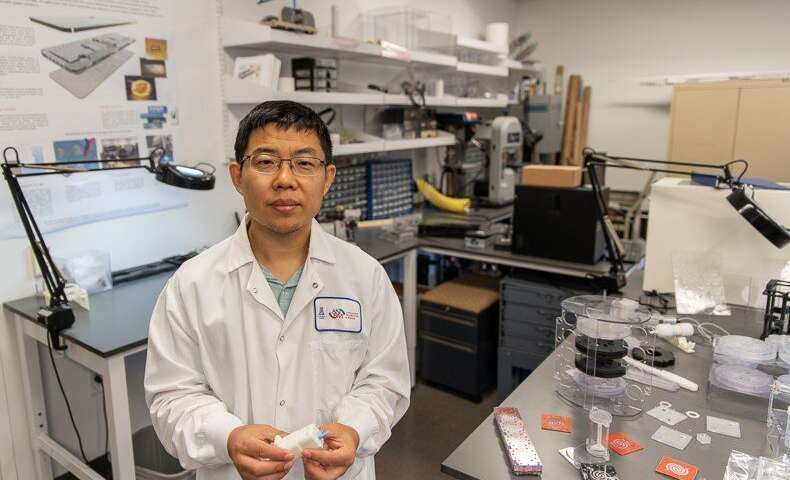 PHOENIX – A University of Arizona College of Medicine – Phoenix research team has developed a blood self-collection device to quickly estimate a person’s exposure to radiation in the event of a nuclear accident or attack.

Led by Jian Gu, PhD, and scientists at the medical school’s Center for Applied NanoBioscience and Medicine (ANBM), the study reports development of a system for packaging critical components of a traditional blood-collection kit to create an integrated fingerstick blood collector for radiation countermeasures.

The study, “Development of an integrated fingerstick blood self-collection device for radiation countermeasures,” was published Oct. 16 in PLOS One, a peer-reviewed open-access journal that features research, commentary and analysis across all areas of science and medicine.

An easy-to-use, self-administered blood test that quickly could evaluate a person’s radiation exposure would help triage emergency medical treatment in the event of a radiological or nuclear event. The U.S. Department of Health and Human Services long has sought ways to monitor a population’s radiation exposure following such an event.

“Our research addressed a critical need of sample collection and pre-processing in biodosimetry logistics after a large-scale radiological event for radiation countermeasures,” Dr. Gu said.

Biological dosimetry determines the extent of damage to DNA caused by ionizing radiation associated with an acute exposure of a dirty bomb or nuclear accident. In ionizing radiation, electrons are knocked out of atoms and form charged particles.

In a nuclear event, hundreds of thousands of people would need to be screened in a very short time, and traditional medical infrastructure for blood collection may not be available.

The specimens need to be prepared for biodosimetry assays after collection. These assays measure the physical changes in a person’s tissues from radiation. Dr. Gu’s work concentrated on the process of collecting and preparing blood to test exposure levels by providing a device that allows a person to collect their own sample that automatically could mix with assay reagents to hasten the process.

Using 3-D printing, a miniaturized vacuum tube, coupled with integrated capillaries and a lancet, were fabricated into a self-collection device that can process the blood specimen for both cytogenetic and gene expression biodosimetry that then would be analyzed in a centralized bioanalytical laboratory. Cytogenetic biodosimetry measures the response of circulating blood lymphocytes in the body to accurately estimate the absorbed radiation dose. Gene expression biodosimetry measures the expression levels of a panel of radiation-sensitive genes for the absorbed dose. Results could be returned in one day in the gene expression tests and three days with the cytogenic tests.

The device was easy to use for people who never had used a fingerstick blood collector, and delivered results similar to samples collected using traditional methods, Dr. Gu said. The integrated format avoided the possibility of contamination.

“The integrated collector will alleviate the sample collection bottleneck for radiation countermeasures following a large-scale nuclear event, and may be useful in other applications with its self-collection and liquid reagent sample preprocessing capabilities,” Dr. Gu said.

The study is part of a core National Institutes of Health program, led since 2005 by Frederic Zenhausern, PhD, MBA, ANBM center director, in partnership with Columbia University and Georgetown University, under a U19 National Institute of Allergy and Infectious Diseases grant, sponsored by the Center for Medical Countermeasures Against Radiation. Teams at the UA College of Medicine – Phoenix and Columbia University have co-developed three major assay platforms for high-throughput biodosimetry, including gene expression, cytogenetics (a branch of genetics concerned with how chromosomes relate to cell behavior during mitosis and meiosis) and metabolomics (the study of small molecules, or metabolites within cells, blood or tissues).

In 2009, Dr. Zenhausern and his team also secured two simultaneous large development contracts from the Biomedical Advanced Research and Development Authority (BARDA) – one issued to Arizona State University and a second to Duke University and the UA. These initiatives produced several patents, publications and a startup company, DxTerity Diagnostics, which then was awarded as much as a $150 million BARDA procurement contract for advanced development and delivery of its REDI-Dx® test, now the first CE-IVD assay for radiation biodosimetry (2018).

Research funding was supported by grants: NIH/NIAID U19 grant with project number 5U19AI067773

Founded in 2007, the University of Arizona College of Medicine – Phoenix inspires and trains exemplary physicians, scientists and leaders to optimize health and health care in Arizona and beyond. By cultivating collaborative research locally and globally, the college accelerates discovery in a number of critical areas — including cancer, stroke, traumatic brain injury and cardiovascular disease. Championed as a student-centric campus, the college has graduated 500 physicians, all of whom received exceptional training from nine clinical partners and 1,800 diverse faculty members. As the anchor to the Phoenix Biomedical Campus, which is projected to have an economic impact of $3.1 billion by 2025, the college prides itself on engaging with the community, fostering education, inclusion, access and advocacy. For more information, please visit phoenixmed.arizona.edu.