Immune-system frailty in adults 65 and older is a widespread public health issue. A study led by the Department of Immunobiology at the University of Arizona College of Medicine – Tucson points to new cells that may hold a solution.

TUCSON, Ariz. – Sixty-five is the age when many people retire, kick back and take it easy. And so it often is with the human immune system. 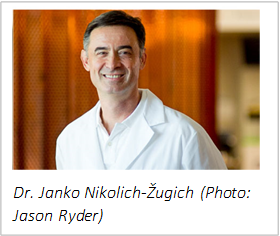 After years of fending off influenza and other infectious diseases, the immune system gradually starts to lose its oomph for fighting infection. As a result, viruses, bacteria and other microbial intruders are a common killer of adults 65 and older.

New findings from a study led by the University of Arizona Health Sciences Department of Immunobiology show it may not have to be that way.

The study examined blood samples from 92 volunteers, age 21 to 97. Researchers focused on a subset of T cells – white blood cells that fight infection and decrease in number as adults age – specifically, T cells labeled “naïve” because they have not yet been exposed to a virus or other infection.

“When there is an infection, like an influenza virus, for example, a small cohort of these naïve T cells – only those that have special molecules on their surface that will bind to fragments of the influenza – are deployed in a very targeted manner,” said Janko Nikolich-Žugich, MD, PhD, head of the Department of Immunobiology and Elizabeth Bowman Professor of Medical Research at the UA College of Medicine – Tucson, and the study’s principal investigator.

These deployed naïve T cells then become effector T cells, he said. Unlike the naïve cells, which cannot harm the virus, effector cells are “armed” and able to clear the virus using antiviral molecules they now make. “Once they have done away with the infection, most of the effector T cells will die, but a substantial number will survive and become ‘memory’ cells,’ which will remember and fight off an infection, if and when it recurs,” Dr. Nikolich-Žugich said.

The breakthrough came when the researchers, focusing on naïve T cells, discovered that when stimulated with pieces of virus, a portion of the cells began making interferon-gamma, a powerful anti-viral molecule.

They found that among these naïve cells – which now looked functionally more like memory cells – many were marked to attack cytomegalovirus (CMV), a type of herpes virus that infects most people and is carried for life without harm, kept in check by a highly functioning immune system, but devastating to those with suppressed immune systems, including older adults.

These naïve T cells are “a new ‘flavor’ of naïve cells that are not completely naïve,” Dr. Nikolich-Žugich said. “So our new discovery is that there is more diversity than we realized within the naïve cells, and that some already have committed to dealing with CMV and other really persistent infections, and others are really, truly naïve.”

Dr. Nikolich-Žugich and his colleagues have named the “new flavor” of T cells “T memory cells with naïve phenotype.”

One next step, Dr. Nikolich-Žugich said, is to count the number of these cells in an individual’s blood sample, which may indicate the fitness of that person’s immune system.

Another step will be to vaccinate some of the people in the study cohort and monitor these special T memory cells before and after vaccination, to test whether it can predict responses to vaccination. In addition to influenza vaccine – which confers more protection on younger adults than older adults – Dr. Nikolich-Žugich would like to try a vaccine given to prevent Japanese Encephalitis Virus – a cousin of West Nile Virus, which belongs to the same group as the Zika and Dengue viruses.

“Giving a vaccine that most people have not been given in their lifetimes will give us a better idea of how fit is their immune system,” he said.

“The biggest challenge for us going forward is to measure the status of the immune system, including these new cells, and actually show, in an average person, if you are below a certain level of a T cell population, or a certain cytokine or a certain antibody, what is your risk of infection or poor response to vaccination. And if you are at risk, how can we work to help you and your immune system.”

Also co-director of the UA Center on Aging and a member of the UA BIO5 Institute, Dr. Nikolich-Žugich has focused nearly 20 years of his career on how aging affects the immune system and what can be done to better protect older adults from infectious disease.

“Older adults are by far the largest group of people who are vulnerable to infections, because of their weakened immune systems,” he said. Some are more vulnerable than others, and not everyone is susceptible to the same extent.

“The challenge for us is to figure out who is, and to what extent, and what we can do to help.”

The study, “Human memory T cells with a naïve phenotype accumulate with aging and respond to persistent viruses,” was published June 6 online before print in Nature Immunology.

About the UA College of Medicine – Tucson

The University of Arizona College of Medicine – Tucson is advancing health and wellness through state-of-the-art medical education programs, groundbreaking research, and advancements in patient care in Arizona and across the United States. Founded in 1967, the College ranks among the top medical schools in the nation for research and primary care and is leading the way in academic medicine through its partnership with Banner – University Medicine, a new division of one of the largest nonprofit health-care systems in the country. For more information: http://medicine.arizona.edu

The University of Arizona Health Sciences is the statewide leader in biomedical research and health professions training. The UA Health Sciences includes the UA Colleges of Medicine (Phoenix and Tucson), Nursing, Pharmacy and Mel and Enid Zuckerman College of Public Health, with main campus locations in Tucson and the growing Phoenix Biomedical Campus in downtown Phoenix. From these vantage points, the UA Health Sciences reaches across the state of Arizona and the greater Southwest to provide cutting-edge health education, research, patient care and community outreach services. A major economic engine, the UA Health Sciences employs almost 5,000 people, has nearly 1,000 faculty members and garners more than $126 million in research grants and contracts annually. For more information: http://uahs.arizona.edu