Roberta Diaz Brinton, PhD is an internationally recognized expert in the cause and treatment of Alzheimer’s disease.  Her findings have re-shaped how the field understands the disease and unlocked the potential for new and innovative therapies to prevent and treat Alzheimer’s. Dr. Brinton will be honored by Arizona’s life science and healthcare community at the AZBio Awards on September 28, 2022 at the Phoenix Convention Center. 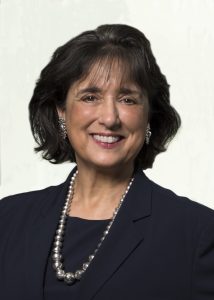 Delivering cures for one of this century’s greatest health challenges: Alzheimer’s disease

In 2021, Roberta Diaz Brinton, PhD, was inducted as a Regents Professor, a title awarded to full Professors who have made transformative and distinguished accomplishments in teaching, scholarship, research, and creative work.

In 2022, she is being honored as the Arizona Bioscience Researcher of the Year.

Dr. Brinton is an internationally recognized expert in the cause and treatment of Alzheimer’s disease.  Her findings have re-shaped how the field understands the disease and unlocked the potential for new and innovative therapies to prevent and treat Alzheimer’s.

More than 20 years ago, Dr. Brinton had two fundamental insights that have, after years of research, yielded major breakthroughs in understanding the etiology of Alzheimer’s and therapeutics to prevent, delay and treat the disease.  Her insights, which predated the advent of precision medicine, formed the basis for programs of research that are critical to personalized therapeutic care for Alzheimer’s disease.

Her research has advanced prevention and treatments for Alzheimer’s disease in three critical areas:

Discovery of mechanisms that increase risk of Alzheimer’s in women who represent two thirds of people with the disease and sex differences in the mechanisms leading to Alzheimer’s disease in men and women.

Translation of her discoveries into innovative strategies to prevent and treat Alzheimer’s disease.

Clinical trials that include PhytoSERM to sustain brain health in women[i] and the ReGEN Brain trial of allopregnanolone to regenerate the Alzheimer’s brain for both men and women.[ii]

Dr. Brinton is the founding Director of The Center for Innovation in Brain Science (CIBS) at the University of Arizona. CIBS is a hybrid ecosystem that leverages the best of innovative university research with the mission focus and management of a biotech. CIBS mission is dedicated to innovations in brain science of the future for those who need a cure today. CIBS research and therapeutic development are focused on age related neurodegenerative diseases including Alzheimer’s, Parkinson’s, Multiple Sclerosis and ALS. Over the past five years, CIBS has generated over $100 million in Federal research investment, 8 patents and launched 7 start-ups.

Her commitment to translational science and Arizona biotechnology inspired Dr. Brinton to found the biotech start-up NeuTherapeutics. Enabled by University of Arizona’s Tech Launch Arizona, NeuTherapeutics, was launched to ensure that the first regenerative medicine for Alzheimer’s disease reaches those who need a cure today.