PHOENIX–(BUSINESS WIRE)–NeuroEM Therapeutics is poised to deliver a knockout blow to Alzheimer’s disease. The clinical-stage medical device company is pleased to announce FDA Breakthrough Device designation for its bioengineered head device shown to reverse Alzheimer’s memory loss in its pilot study, published last fall in the Journal of Alzheimer’s Disease.

“No other drug or device has received this highest FDA designation to accelerate a treatment for Alzheimer’s disease,” said Dr. Robert Matthews, PhD, CEO of NeuroEM Therapeutics. “No other treatment has demonstrated the clinical results we have thus far, to not only slow but in fact reverse the progressive, debilitating loss of memory caused by this devastating brain disease.” 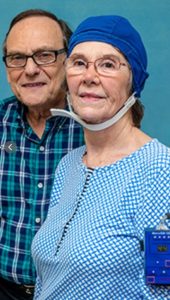 Woman pictured wearing NeuroEM Therapeutics’ bioengineered MemorEM™ cap and arm control box. This revolutionary head device has earned FDA Breakthrough Device designation, having demonstrated in a pilot study that it can reverse Alzheimer’s disease. This woman’s participation in the study resulted in her regaining the equivalent of 12 months of memory. (Photo: Business Wire)

The FDA has given Breakthrough status to over 300 devices and over 100 drugs, but none to a therapeutic for Alzheimer’s disease – until now. NeuroEM’s head device (MemorEMTM) is the first-ever Alzheimer’s treatment (device or drug) to receive FDA Breakthrough status. The FDA program is designed to expedite the development and review process of new technology for patients with life-threatening or irreversibly debilitating conditions, such as Alzheimer’s Disease.

NeuroEM’s novel, proprietary technology, called Transcranial Electromagnetic Treatment (TEMT), achieves what other treatments for AD have not. In fact, no other therapy comes close to MemorEM’s remarkable results, made possible by its unique modes of action.

In just two months of daily use, the MemorEM restored on average the equivalent of 12 months of memory for 7 of 8 participants in its pilot study, none of whom experienced adverse side effects.
Treatment is easy, comfortable and safe. A patient wears what appears to be a simple cap that belies the complex biomedical engineering within it. The device is worn twice a day in home for an hour at a time, and its design allows the patient to move around home as usual.
NeuroEM has pioneered TEMT to successfully penetrate the skull to reach vital nerve cells in the brain called neurons. NeuroEM’s revolutionary TEMT technology works by breaking up small aggregates (oligomers) of two toxic proteins, called β-amyloid and tau, that are made inside the brain’s neurons during the Alzheimer’s disease process. These two toxic oligomers appear to be the root cause of Alzheimer’s disease by wreaking havoc on vital functions within neurons – especially in brain areas involved in memory. The electromagnetic waves emanating from multiple emitters within NeuroEM’s MemorEM head device easily penetrate the human brain and gently disassociate the toxic oligomers inside neurons resulting in a reversal of Alzheimer’s memory impairment in key tasks used to evaluate cognitive performance.

Despite over 20 years of searching for an Alzheimer’s therapeutic, there still is no drug or device other than MemorEM that has demonstrated the ability to stop or reverse Alzheimer’s memory decline. The researchers at NeuroEM Therapeutics believe that the MemorEM device’s ability to treat Alzheimer’s disease processes going on inside the brain’s neurons will at last effectively treat this dread disease. While drugs have great difficulty getting into the brain and then into neurons, the MemorEM device’s electromagnetic wave therapy has shown the ability to do so.

The company is planning a 12-month Pivotal clinical trial beginning in mid-2021. This trial will test the effectiveness of various TEMT treatments compared to a control group. If successful, this trial could result in FDA approval of the MemorEM device to treat the cognitive dysfunction of Alzheimer’s Disease within the next several years.

“While initial efforts focus on developing an effective treatment for the increasing scourge of Alzheimer’s disease, NeuroEM’s continuing mission will use our disruptive biomedical engineering to treat other neurodegenerative disorders, such as traumatic brain injury and Parkinson’s disease,” Dr. Matthews said, adding, “The FDA Breakthrough Device designation allows us to move faster and help those who are struggling with these brain disorders and the loved ones who care for them.”

Alzheimer’s disease (AD) is a progressive, lethal brain disease that destroys neurons, which are specialized cells that control memory, thinking and behavior. Over time, patients become unable to function in the world and even in their own home as severe stages of decline result in significant confusion, the ability to communicate, respond to their environment, control their bladder and bowels, feed themselves or even swallow. Ultimately, they become bed-ridden and require 24-hour care.

Alzheimer’s by the numbers:

The company has obtained research support from the National Institutes of Health (NIH), a prominent charitable foundation and angel investors. NeuroEM is currently preparing to launch its upcoming clinical trials. For information about NeuroEM Therapeutics and its novel proprietary bioengineering technology, contact Bill Gordon, COO, at (602)-857-8234 or bill.gordon@neuroem.com. For information about upcoming clinical trials, sign up here.