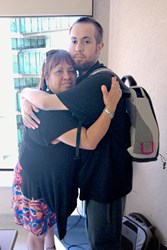 Kevin Stroh’s mom, Esperanza Longo, feared for her son when he was diagnosed with the same disease that took her husband’s life, congestive heart failure. Kevin is wearing his 13.5 pound Freedom portable driver in the backpack that powers the SynCardia Total Artificial Heart. Use of the SynCardia Total Artificial Heart provided Kevin with a bridge to human heart transplant and a much happier outcome.

TUCSON, Ariz.  Oct. 8, 2013  Kevin Stroh, 25, was fighting for his life against congestive heart failure, the same disease that claimed the life of his 29-year-old father. Thanks to the world’s first and only FDA-approved SynCardia temporary Total Artificial Heart, this Southern California resident had a much different outcome.

Stroh had never had a heart problem until the winter of 2013. He became breathless after riding his motorcycle on a cold January morning to a job site to install conveyor equipment. This went on for several days until early February. After hours of vomiting and sweating, he tried to sleep, only to wake up because he couldn’t breathe.

His mother took him to a nearby emergency room where doctors found a liter of liquid in his lungs. They diagnosed Stroh as suffering from congestive heart failure. It was then that his mom, Esperanza Longo, realized what was happening. “She was just crying,” Stroh recalls. “It was the same thing that my dad went through 22 years ago. She was witnessing it again. That scared me. I thought I was going to die.”

After a few days in the hospital, Stroh went home with medication, but his conditioned worsened.
He couldn’t keep food down and his skin started turning gray. He moved out of his Rancho Cucamonga apartment to live with his family in Fontana…  read more at SynCardia.com