TUCSON, Ariz. – David S. Alberts, MD, director of the University of Arizona Cancer Center from 2005-2013, has been granted the director emeritus title by the Arizona Health Sciences Center.

The title is retroactive to July 1 and will accompany his current title of Regents Professor of Medicine, Pharmacology, Nutritional Science and Public Health. Anne Cress, PhD, was named interim director of the UA Cancer Center on July 19. 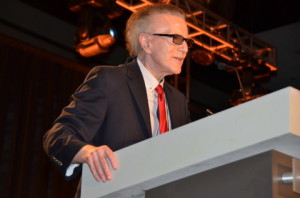 Dr. David Alberts was honored by AZBio in 2012 with the AZBio Pioneer Award
for Lifetime of Achievement.

“Your career at the University of Arizona has been more than distinguished, and your years of service to advancing our institution is much appreciated,” said Joe G. N. “Skip” Garcia, MD, UA senior vice president for health sciences, in a letter addressed to Dr. Alberts on Oct. 4. “We value the renown and prestige you have built for the Cancer Center, and thank you for your dedication and leadership. The passion by which you have served is evident to all.”

Currently, Dr. Alberts helps to coordinate Phase I and II and pharmacokinetic drug studies at the UA Cancer Center for molecularly targeted chemopreventive agents. His laboratory research is concentrated on the evaluation of new surrogate endpoint biomarkers for cancer prevention trials. His National Cancer Institute-funded drug and diagnostics research has resulted in more than two dozen patents and the co-founding of five Arizona pharmaceutical and biotechnology companies.

During his career, Dr. Alberts has served as an advisor to numerous cancer research foundations and committees, such as chair of the Oncologic Drug Advisory Committee to the Food and Drug Administration (1984-1986). And he was a member of the NCI’s Board of Counselors (to the Division of Cancer Prevention, 1990-1994), the Board of Scientific Advisors (1999-2006), and the coordinating subcommittee to the NCI’s Clinical Translational Advisory Committee (2006-2009).

Dr. Alberts has authored or co-authored more than 550 peer-reviewed publications, more than 100 book chapters and 60 invited articles, and has served as editor and co-editor of eight books. He has served on the editorial boards of several peer-reviewed scientific journals, including associate editor for Cancer Research from 1989-2002. Between 2002-2008, he acted as the co-editor-in-chief of Cancer Epidemiology, Biomarkers & Prevention, the leading cancer public health research journal worldwide.

Dr. Alberts received his MD in 1966 from University of Virginia School of Medicine. He conducted his internship at the University of Wisconsin, before becoming a clinical associate in medical oncology at the National Cancer Institute’s Baltimore Cancer Research Center. Dr. Alberts conducted his internal medicine residency at the University of Minnesota and then served on the faculty of the University of California, San Francisco, for five years and obtained board certification in medicine and medical oncology in 1973. He joined the UA College of Medicine in 1975 as an assistant professor, where he has served for 38 years.

About The University of Arizona Cancer Center

The University of Arizona Cancer Center is the only National Cancer Institute-designated Comprehensive Cancer Center headquartered in Arizona. The UACC is supported by NCI Cancer Center Support Grant number CA023074. With primary locations at the University of Arizona in Tucson and at St. Joseph’s Hospital and Medical Center in Phoenix, the Cancer Center has more than a dozen research and education offices in Phoenix and throughout the state and 300 physician and scientist members work together to prevent and cure cancer. For more information, please go to www.arizonacancercenter.org