Arizona researchers are playing a key role in the search for new ways to identify CTE before death. In a study released online in the New England Journal of Medicine, a cross-national team, including local researchers from Arizona State University, Banner Alzheimer’s Institute, the Mayo Clinic College of Medicine, and Boston University have brought us a step closer to diagnosing CTE in living, former NFL players. 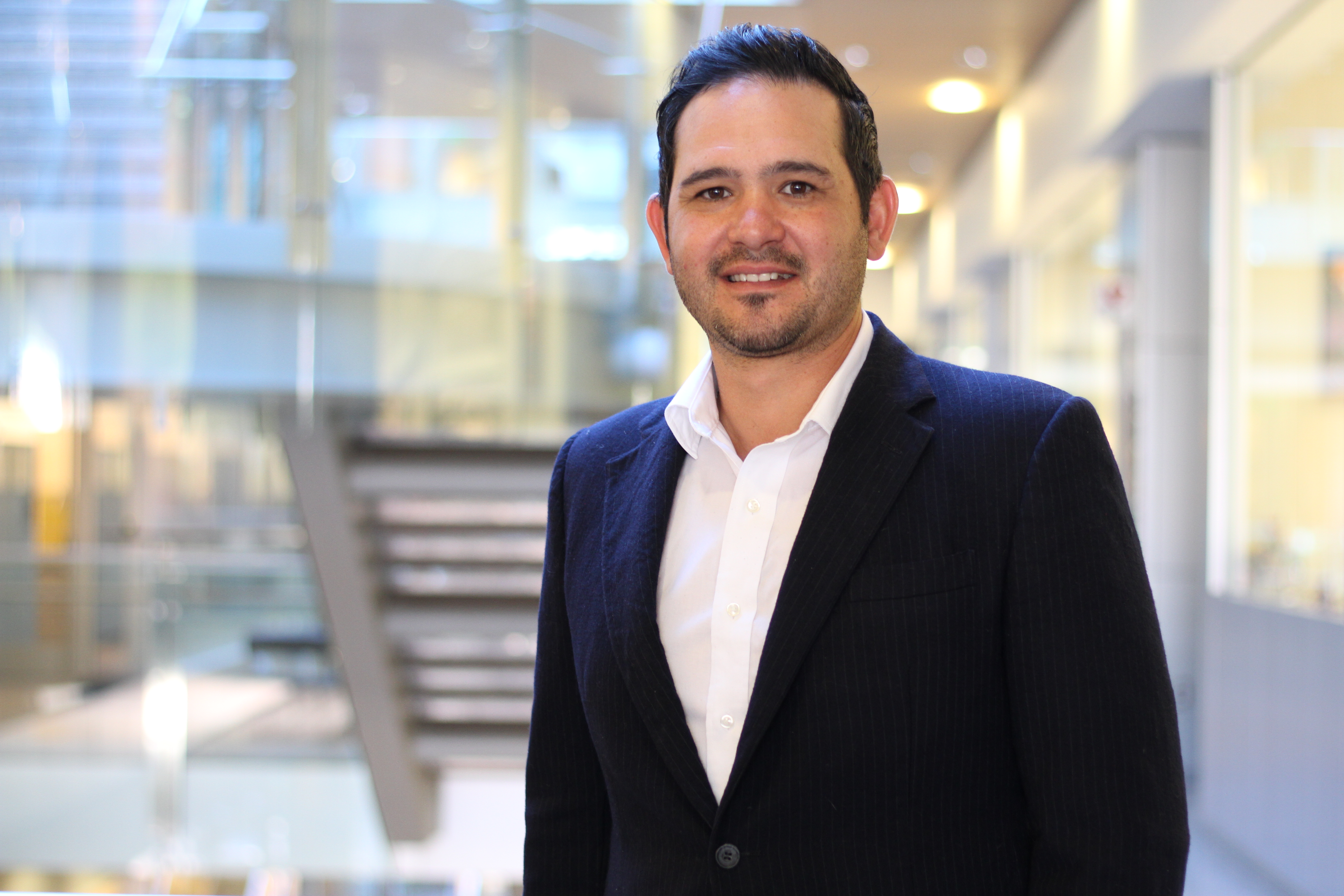 Diego Mastroeni is a researcher with the ASU-Banner Neurological Disease Research Center at the Biodesign Institute.

When you search online for “CTE and NFL,” you’ll find a list of 54 professional football players who have died, and were diagnosed with the degenerative brain disease chronic traumatic encephalopathy, or CTE – names like Frank Gifford, Ken Stabler, Bubba Smith and Andre Waters. It’s a smart guess that hundreds more are unaccounted for.

Next, you’ll see a list of living ex-NFL players including Brett Favre, Bernie Kosar and Jim McMahon, who have been diagnosed with “likely CTE.” And therein lies the problem: CTE cannot be detected until autopsy, leaving questions about who has it, when they get it, and how it affects their lives. To confirm CTE, scientists must rely on players and families who agree to donate their brains to research.

But now, Arizona researchers are playing a key role in the search for new ways to identify CTE before death. In a study released online in the New England Journal of Medicine, a cross-national team, including local researchers from Arizona State University, Banner Alzheimer’s Institute, the Mayo Clinic College of Medicine, and Boston University have brought us a step closer to diagnosing CTE in living, former NFL players.

The study demonstrates that an experimental positron emission tomography (PET) scan can detect a hallmark of CTE, the accumulation of abnormal tau protein in brain regions of living former NFL players who have cognitive, mood, and behavior symptoms. The researchers also found that the more years of tackle football played (across all levels of play), the higher the tau protein levels detected by the PET scan.

Corresponding author Robert Stern, a professor of neurology, neurosurgery and anatomy and neurobiology at Boston University School of Medicine (BUSM), said that “the results of this study provide initial support for the flortaucipir PET scan to detect abnormal tau from CTE during life. However, we’re not there yet,” he cautioned. “These results do not mean that we can now diagnose CTE during life or that this experimental test is ready for use in the clinic.”

CTE is a neurodegenerative disease associated with repeated blows to the head. Symptoms of CTE can begin in a patient’s late 20s or early 30s. Common behaviors are anger, lack of impulse control, depression, suicidal thinking and paranoia. This is a brain disease for which there is no treatment.

In CTE, a protein called tau forms clumps that slowly spread through the brain, killing brain cells, and patients typically show a relative lack of the amyloid plaques which are associated with Alzheimer’s disease.

Diego Mastroeni, a researcher with the ASU-Banner Neurological Disease Research Center at the Biodesign Institute, first got an “up-close-and-personal” look when a member of Mastroeni’s family shared his concerns about memory issues and how his NFL career may have affected his brain. Mastroeni was recruited to speak at a meeting of Arizona’s NFL Alumni Association.

“This was 2015. The NFL concussion settlement was in full form, but players needed to be diagnosed with dementia or mild cognitive impairment in order to qualify,” said Mastroeni. “By this time I was having personal communication with well over 50 retired NFL players. They were calling and emailing me daily, pleading for help, asking what to do.”

Methods for diagnosing CTE in living patients were undependable and expensive.  A single brain scan cost about $10,000 at the time.

“When I say this is a vulnerable population, I mean it,” said Mastroeni. “It got to the point that I needed to find a way to help these guys at no cost to them.”

From his work with Alzheimer’s, Mastroeni knew that chances were good that CTE was brewing in the brain before symptoms began appearing.

“Unfortunately, efforts to develop a diagnostic tool during life have largely been unsuccessful,” said Mastroeni. But Mastroeni also knew that advances in brain imaging techniques like PET scans were revolutionizing the field, providing a means to reliably detect and track brain changes in living subjects before the onset of memory loss in neurological conditions like Alzheimer’s disease.

Mastroeni reached out to Marwan Sabbagh, a neuroscientist, formerly with Banner Alzheimer’s Institute and now with the Cleveland Clinic, and asked if he’d be willing to meet with Mastroeni’s relative and others who had expressed interest.

Next, Mastroeni connected with Eric Reiman, a leader in neuro-imaging, University Professor of Neurology at Arizona State University and executive director of Banner Alzheimer’s Institute, who knew just the right people with whom to partner.

“A couple weeks later, Bob Stern flew out from Boston and we hashed out a plan to image all the guys we could; some at BUSM, some at Banner and some at Mayo, at no cost to them,” said Mastroeni. Stern leads a CTE Center at BUSM where he is working to develop accurate methods to detect and diagnose CTE while the player is still alive, gaining a better understanding of risk factors for the disease – and understanding why some players get it and some do not.

In 2014, Mastroeni sent a letter to NFL players who lived in Arizona, offering them the opportunity to be part of a study. After several appearances at the local NFL alumni chapter, some 60 players were eager to participate. Some of the patients were included in the study and others did not meet the inclusion criteria. The State of Arizona provided enough funding to launch the study in Arizona, while researchers in Boston also recruited participants and secured their own funding.

The Arizona force was strong, involving not only Mastroeni and Reiman’s team in Arizona, but also neurologists David Dodick and Charles Adler at the Mayo Clinic College of Medicine in Phoenix. The multidisciplinary group of researchers also included Brigham and Women’s Hospital and Avid Radiopharmaceuticals.

In the study, experimental flortaucipir PET scans (flortaucipir is the chemical used to measure tau in the PET scans) is the were used to assess tau deposition, and FDA-approved florbetapir PET scans were used to assess amyloid plaque deposition in the brains of 26 living former NFL players with cognitive, mood and behavioral symptoms (ages 40-69). There was also a control group of 31 same-aged men without symptoms or history of traumatic brain injury.

Results showed that the tau PET levels were significantly higher in the former NFL group than in the controls, and tau was seen in the specific areas of the brain which have been shown to be affected in post-mortem cases of neuropathologically diagnosed CTE.

“Our findings suggest that mild cognitive, emotional and behavioral symptoms observed in athletes with a history of repetitive impacts are not attributable to AD, and they provide a foundation for additional research studies to advance the scientific understanding, diagnosis, treatment and prevention of CTE in living persons,” said co-author Reiman. “More research is needed to draw firm conclusions, and contact sports athletes, their families, and other stakeholders are waiting.

With support from NIH, the authors are working with additional researchers to conduct a longitudinal study called the DIAGNOSE CTE Research Project in former NFL players, former college football players and persons without a history of contact sports play to help address these and other important questions. Initial results of that study are expected in early 2020.

Funding for this study was provided by grants from Avid Radiopharmaceuticals (a wholly-owned subsidiary of Eli Lilly and Company), the National Institutes of Health (grant numbers R01NS078337, U19AG024904, 1UL1TR001430); the State of Arizona; and the US Department of Defense (grant numbers W81XWH-13-2-0063, W81XWH-13-2-0064, W81XWH-14-1-0462). All flortaucipir and florbetapir PET radiotracers were provided by Avid Radiopharmaceuticals.