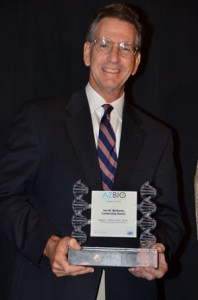 The new company, simply called Paradigm, is being formed as a nonprofit and will be a spinout of Phoenix-based IGC, in partnership with the University of Michigan.

Paradigm will have offices in Phoenix and Ann Arbor, Mich., at U-M, and will employ 15 people at each of its offices within the first three years, Penny said.

“The goal for this is to be a national company,” Penny said. “It will be involved in translating a lot of the sequencing information that is now coming available, to drive that into clinical trials and into patient care in the future, so patients get the best opportunity to get a drug more likely to work well.”

Its goal is to figure out ways to get the right drug at the right time for the right patient, he said.

Penny said he originally was going to form Paradigm as a for-profit company, like his other ventures, including Molecular Profiling Inc.

But when he talked with his business associates, he was referred to Dr. Jay Hess, chairman of the Department of Pathology at the U-M Medical School, because they seemed to have similar visions.

“I met with Dr. Hess,” Penny said. “Quite frankly, he out-competed every other potential opportunity by a multiple factor.”

Hess said IGC has a track record of bringing molecular diagnostics to market. He also likes the idea that both IGC and the university are nonprofits with a patient-focused vision.

“We’re doing this because we want to be leaders in bringing personalized medicine to patients in a way that’s going to improve their health,” Hess said.

U-M Medical School is known for its research in prostate cancer. It has run a molecular diagnostics reference laboratory for the past 20 years.

“This is an extension of what we do,” Hess said.

While Paradigm will start out in cancer research, it will expand to other non-cancer diseases in the future, he said.