A genetic mutation responsible for a debilitating childhood neurological condition known as Aicardi syndrome has been identified by the Translational Genomics Research Institute (TGen). 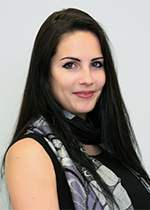 “These findings are of clinical importance because they demonstrate AIC linked to autosomal mutations, and therefore for the first time rule-in a likely much higher frequency of AIC in boys,” said Dr. Isabelle Schrauwen, a Research Assistant Professor in Dr. Matt Huentelman’s lab and the lead author of the study.

In a study published today in the scientific journal Investigative Ophthalmology & Visual Science, TGen researchers identified mutations to a gene known as TEAD1, which not only affects formation of the brain but also the retina, the part of the eye responsible for helping turn light into nerve impulses.

In addition, the TGen study found that – contrary to previous studies – Aicardi syndrome may also occur in boys, as well as girls.

Within five months of birth, children with Aicardi syndrome experience: spasms or seizures; ice-cream-scoop-like divots in the retina known as chorioretinal lacunae; and a partial or complete absence of a key brain structure called the corpus callosum, which normally connects the two sides, or hemispheres, of the brain.

“Discovering the first gene mutation associated with Aicardi syndrome is a revolutionary finding with many implications about how children with this disorder might be best identified and treated in the future,” said Dr. Matt Huentelman, Co-Director of TGen’s Center for Rare Childhood Disorders and the study’s senior author.

To identify genetic factors in the cellular pathways involved in AIC, TGen researchers sequenced the genomes of 10 children with the disorder, as well as their parents. By screening the billions of pieces of genetic information, they discovered a mutation in TEAD1.

“Discovery of a specific genetic change associated with AIC will help improve diagnosis, provide a better understanding of the disease biology, and lead to better treatment approaches,” said Dr. Vinodh Narayanan, Medical Director of TGen’s Center for Rare Childhood Disorders and one of the study’s authors. For information about TGen’s rare-disorders program and clinic, please visit: www.c4rcd.org.

TGen’s Center for Rare Childhood Disorders was established in 2010 to examine the genetic basis of disease in children with medical conditions that have no definitive diagnosis. Since its inception, the Center has enrolled more than 900 participants and analyzed the genetics or genomics of more than 200 families, with a diagnostic success rate of nearly 40 percent. The Center is co-directed by three TGen scientists: Dr. Huentelman, Dr. Narayanan, and Dr. David Craig, TGen Deputy Director of Bioinformatics and one of the study’s authors. The Center has established collaborations that stretch across the globe.

TEAD1 has previously been associated with Sveinsson’s syndrome, an inherited progressive weakening of the eye’s retina and choroid, a layer of nerves and blood vessels that connects the retina to the optic nerves. The TGen study suggests that TEAD1 mutations can lead to other chorioretinal complications, such as chorioretinal lacunae.

The TGen study also found that the children in this study also share a potential pathogenic, or disease-causing, mechanism: the altered expression of genes associated with neuronal development; retinal development; cell-cycle control; and synaptic plasticity, the ability of synapses to strengthen or weaken over time in response to increases or decreases in their activity.

Most surprising was the finding that AIC might also be more common among boys than previously thought because the TEAD1 mutation is on an autosome, a chromosome not linked to sex.

AIC had been strongly presumed by geneticists to be an X-linked-dominant disorder occurring almost exclusively in females. However, no gene on the X chromosome has ever been conclusively associated with AIC.

“Our study strongly challenges this notion by demonstrating a deleterious mutation of TEAD1 on an autosome,” said Dr. Isabelle Schrauwen, a Research Assistant Professor in Dr. Huentelman’s lab and the lead author of the study. “These findings are of clinical importance because they demonstrate AIC linked to autosomal mutations, and therefore for the first time rule-in a likely much higher frequency of AIC in boys.”

This study was funded by private donations to the TGen Foundation for TGen’s Center for Rare Childhood Disorders.