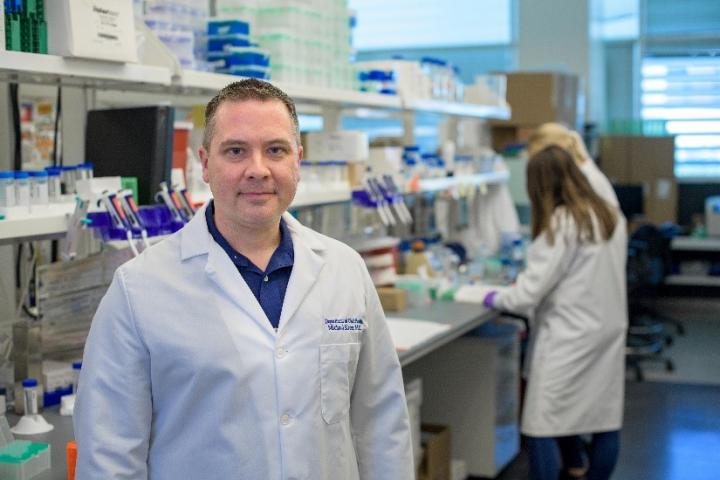 PHOENIX – A University of Arizona College of Medicine – Phoenix physician-scientist has been awarded the first federally funded grant to study whether mutated genes can lead to cerebral palsy.

Michael Kruer, MD, an associate professor of neurology and child health at the UA Phoenix medical school, has received a $3 million grant from the National Institutes of Health for his project, “Genomic insights into the neurobiology of cerebral palsy.”

Historically, medical experts have believed cerebral palsy occurs due to factors such as prematurity, an infection or a lack of oxygen to the developing brain.

Dr. Kruer’s research will focus on the one-third of people with cerebral palsy who did not have these risk factors. His project will study mutated genes that could lead to cerebral palsy.

“Understanding how brain development goes awry using a combination of genetics and cell biology will help us develop better diagnostics and treatments for a disorder that hasn’t seen new therapies in decades,” Dr. Kruer said.

Cerebral palsy is a core neurodevelopmental disorder that affects an estimated 1 in 250 children.

“We already know that major neurodevelopmental disorders such as autism, intellectual disability and epilepsy have a strong genetic basis,” Dr. Kruer said. “Our findings indicate that identifying genetic causes of CP can serve as a window into the fundamental basis of the disorder, and are already telling us that in many cases CP results from a ‘wrong turn’ during early brain development.”

The grant includes a plan to enroll 500 individuals with CP and their parents (1,500 individuals) with the help of the Cerebral Palsy Research Network (www.cprn.org), a nationwide collaborative that connects centers of excellence in cerebral palsy care. Enrollment is proceeding on a national level with Arizona participants being heavily recruited.

Dr. Kruer’s lab will sequence families’ genomes, hoping to discover genes that could lead to CP, when mutated. Then, the lab plans to study effects of gene mutations in human cells, yeast and fly models.

“We hope to identify many new ‘CP genes’ and uncover ways that they converge to affect brain development,” Dr. Kruer said. “We think in the near term, this will lead to new diagnostics and closure for families, while also affecting the trajectory of CP research.”

“This study exemplifies the groundbreaking work our researchers are doing in genomics, and I am very excited to see what Dr. Kruer and his team discover,” UA President Robert C. Robbins, MD said. “It is crucial that we better understand the causes of cerebral palsy so that we can develop better treatments for the children who suffer from this disorder. Studies like this will help UA Health Sciences become a global leader and further our impact in service to Arizona.”

Dr. Kruer, who is chair of the International Cerebral Palsy Genomics Consortium (www.icpgc.org) and director of the Cerebral Palsy and Pediatric Movement Disorders Program at Barrow Neurological Institute at Phoenix Children’s Hospital, has been studying genetic causes of CP for three years. His interest in the condition began 10 years ago with a single, “amazing” family he cared for with four children with CP. He said that experience did not “fit” with what he had been taught about the disorder during his training, leading him to think about CP in a different way.

“I am committed to this line of work because as a physician-scientist, I have dedicated my career to helping children with movement disorders such as CP,” Dr. Kruer said. “I not only want to provide today’s very best treatments, but want to be on the front lines searching for answers and better treatments for the kids I see in my office and in the hospital all the time.”

Research reported in this release was supported by National Institutes of Health R01 grant No.1R01 NS106298. The content is solely the responsibility of the authors and does not necessarily represent the official views of the NIH.

Founded in 2007, the University of Arizona College of Medicine – Phoenix inspires and trains exemplary physicians, scientists and leaders to optimize health and health care in Arizona and beyond. By cultivating collaborative research locally and globally, the college accelerates discovery in a number of critical areas — including cancer, stroke, traumatic brain injury and cardiovascular disease. Championed as a student-centric campus, the college has graduated 433 physicians, all of whom received exceptional training from nine clinical partners and 1,800 diverse faculty members. As the anchor to the Phoenix Biomedical Campus, which is projected to have an economic impact of $3.1 billion by 2025, the college prides itself on engaging with the community, fostering education, inclusion, access and advocacy. For more information, please visit phoenixmed.arizona.edu.