According to Paul Coleman, an Alzheimer’s researcher at the ASU-Banner Neurodegenerative Disease Research Center (NDRC), one of the greatest difficulties plaguing efforts to find effective treatments for Alzheimer’s is the enormous lag between the disease’s inception and the appearance of clinical symptoms. 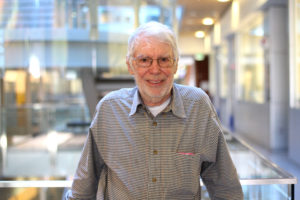 In addition to the NDRC, study collaborators include ASU, the Mayo Clinic, University of Rochester, Banner Alzheimer Institute and Barrow Neurological Institute.

The new method successfully distinguished between Alzheimer’s, Parkinson’s and healthy controls, indicating that the test does not simply identify general phenomena of neurodegeneration but is able to pick out AD from other degenerative brain conditions.

“What we’ve done in our paper is to replicate our own work multiple times with different populations and even using different technologies,” Coleman says. “We also presented data showing the ability to detect people at risk of a future diagnosis for Alzheimer’s disease.”

The study was recently published in the journal Neurobiology of Aging.

Alzheimer’s disease continues its pitiless ascent. The illness afflicts 11 percent of those 65 or older, with the figure soaring to 45 percent for people over 85. Current trends predict some 14 million Americans will be afflicted with the disease by mid-century at a towering cost of a trillion dollars.

Along its path of destruction, Alzheimer’s tears out its victim’s memory, reasoning capacity and personal identity, necessitating around-the-clock care, before death eventually ensues. The crippling toll of the disease on patients, family and society at large makes it a global health crisis of frightening proportions.

Researchers now know that by the time the first outward manifestations of Alzheimer’s appear, in the form of confusion, memory loss and other classic hallmarks, Alzheimer’s has been ravaging the brain for decades. If the disease could be identified much earlier—close to its origin—there is hope that perhaps it could be slowed or even halted in its tracks.

Given the vital need for a safe and reliable early diagnostic for Alzheimer’s, many previous efforts have taken aim at the problem. Ideally, such a method should be appropriate for primary care settings, allowing a broad swath of the public to be accurately and regularly tested.

Until now, however, efforts to develop a reliable early diagnostic for Alzheimer’s have run aground. Further, the accuracy of diagnosis even after the disease has entered its clinical phase, remains poor.

It has long been known that Alzheimer’s produces changes in the brain, which can stimulate genes relating to conditions like stress and inflammation.  Expression of these genes appears in the blood in the form of specific RNA transcripts.

The research results clearly demonstrate that these RNA transcripts can be combined into a potent early diagnostic or biomarker, able to distinguish normal patients from those with Alzheimer’s or Parkinson’s disease and—most importantly— make accurate predictions about patients at risk for future development of Alzheimer’s disease.

The diagnostic precision of the new test is significant. Existing diagnostic screening results for known AD cases (identified through clinical and neuropathological factors), showed diagnostic sensitivity was between 71 percent and 87 percent while specificity ranged from 44 percent to 70 percent. (In medical diagnosis, sensitivity is the ability of a test to correctly identify those with the disease, known as the true positive rate, whereas specificity refers to the ability of the test to correctly identify those without the disease or the true negative rate.)

Such diagnoses are typically conducted in specialized facilities devoted to the study of Alzheimer’s. As the authors note, the accuracy of standard diagnosis falls significantly in primary care settings. The result is that Alzheimer’s is generally detected very late in the disease process, if it is correctly identified at all—a blueprint for treatment failure, because the illness has already irreparably damaged the brain. The high rate of misdiagnosis leads to frequently unnecessary and ineffective treatment.

Disease in the cross-hairs

In a fresh approach, the authors identify RNA transcripts in blood using two different RNA-analysis techniques, known as cDNA array and reverse transcriptase polymerase chain reaction (RT-PCR). Results of the two methods were in close agreement and were further shown to be replicable across multiple sample populations. This allowed the researchers to design a consistent suite of transcripts that could be used to diagnose the disease. This multivariate analysis demonstrated impressive accuracy in a number of critical experiments described in the new paper.

The study divides 177 blood and 27 post-mortem brain samples into several groups, establishing that careful analysis of RNA transcripts in blood samples has the ability to distinguish early clinical AD, Parkinson’s disease (PD), and cognitively healthy patients. It can accurately identify those carrying two copies of the APOE4 gene—known to be a severe risk factor for developing Alzheimer’s. Transcript screening was also used to identify those at risk for future cognitive impairment due to having at least one direct relative with AD.

The study reveals that both cDNA and RT-PCR methods managed to distinguish probable AD from normal controls with an accuracy of 93.8 percent, using just 5 RNA transcripts for the test. As the authors note, the blood test’s’ accuracy may be even higher as some of the “false positives”—healthy cases mischaracterized as AD—may be from subjects who are actually positive for pre-symptomatic manifestations of Alzheimer’s.

The results demonstrate that multivariate analysis of transcripts in blood samples provide an accurate and minimally invasive strategy for diagnosis of AD and early detection of AD risk. Further, the results were consistent with examination of the same transcripts identified in the post-mortem brains of subjects with Alzheimer’s compared with those diagnosed with Parkinson’s disease and with normal controls. (The brain samples, obtained through the Banner Sun Health Research Institute, were taken from a region known to be vulnerable to the most devastating effects of Alzheimer’s.)

In addition to RNA transcripts linked with inflammation and stress, the study examines a series of epigenetic transcripts—RNA sequences that have undergone post-transcriptional modification. Results again found a strong correlation between the presence of these epigenetic markers and AD, implying they may also provide a compelling diagnostic tool.

Future refinements should sharpen the method’s ability to accurately identify Alzheimer’s disease at an early stage—prior to the onset of clinical symptoms— in a primary care setting, with just a simple blood extraction.  Efforts to conduct long term longitudinal studies and hunt for additional diagnostic transcripts should eventually be combined with testing of new therapeutics aimed at early intervention.

Intriguingly, one or more of the many existing drugs for Alzheimer’s which have failed in clinical trials, may actually succeed in slowing or arresting Alzheimer’s if they can be delivered early enough in the disease process. Further, trials for new drugs targeting at-risk patients can be ramped up significantly if a simple, non-invasive blood test can replace costly imaging like PET scan.

The new early diagnostic therefore represents a promising milestone in the war on Alzheimer’s disease.

—written by Richard Harth for the Biodesign Institute