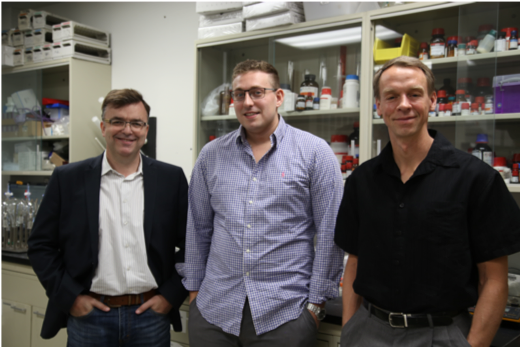 To bring the potential drug candidates a step closer to real-world impact for patients, the team worked with Tech Launch Arizona, the office of the UA that commercializes inventions stemming from academic research, to patent the invention and license the technology to the start-up company, Iluminos Therapeutics, recently founded by Drs. Hulme and Dunckley.

According to the US Department of Health and Human Services, Alzheimer’s disease is the most prevalent neurodegenerative disease in the growing population of elderly people, currently affecting nearly 6 million Americans; and these patients and their doctors have no cure or treatment options that can slow the relentless progression of this devastating disease. Iluminos Therapeutics intends to focus its development efforts on Alzheimer’s disease. However, additional studies suggest high potential for possible utility as treatments for Down Syndrome and Diabetes.

By utilizing small molecules that help inhibit the DYRK1A kinase, Drs Hulme, Dunckley and collaborators have demonstrated that their unique compounds dramatically slow the onset of Alzheimer’s disease pathology in animal models of the disease (Aging Cell, 2017, 16(5), 1146-1154).

This work was led by NDRC researcher Salvatore Oddo, lead author Caterina Branca along with their colleagues. The important research takes advantage of the protein kinase Dyrk1a, which acts on both amyloid precursor protein or APP and tau—two hallmarks of AD pathology.

Intriguingly, high levels of Dyrk1a have also been linked with mental retardation. The group’s research showed that inhibition of Dyrk1a reversed cognitive decline in a mouse model of Alzheimer’s disease, which appeared to be linked to associated reductions in amyloid‐β (Aβ) and tau pathology, suggesting a promising new approach to AD treatment.

“Iluminos Therapeutics will seek to expand upon the significant pre-clinical findings to advance our novel compound series to clinical trials in AD patients, with the goal of halting or slowing the progression of the disease. Achieving this goal would be a significant step forward in treatment options for patients with AD,” according to Dr. Dunckley.

“Alzheimer’s is a devastating disease, but we’re hopeful that discoveries such as these small molecules will lead to treatments that will improve and save lives,” said Rakhi Gibbons, associate director for biomedical and life sciences licensing at TLA.

“This is an excellent example of scientists working within a strong team-oriented and milestone driven paradigm across institutions to address big problems. It is the culmination of a sustained seven year effort,” said Hulme.­­ Dr. Dunckley agrees, noting that “this has been a revelatory experience in regard to the vital importance of highly skilled medicinal chemists in translational drug development efforts.”