Deep within the subterranean confines of Building C—the latest addition to the Biodesign Institute at Arizona State University—a pathbreaking machine is quietly taking shape. Designed to unlock some of nature’s tiniest and most fleeting mysteries, the Compact X-ray Free Electron Laser (CXFEL) is the only instrument of its kind in the world.

The device is the brainchild of physicist William Graves, a passionate authority on massive, intricate machines for leading-edge science. For the past 30 years he has worked on the design and construction of particle accelerators. The CXFEL represents ASU’s bold attempt to dramatically reduce the size of such instruments, making them suitable for universities and medical institutions. 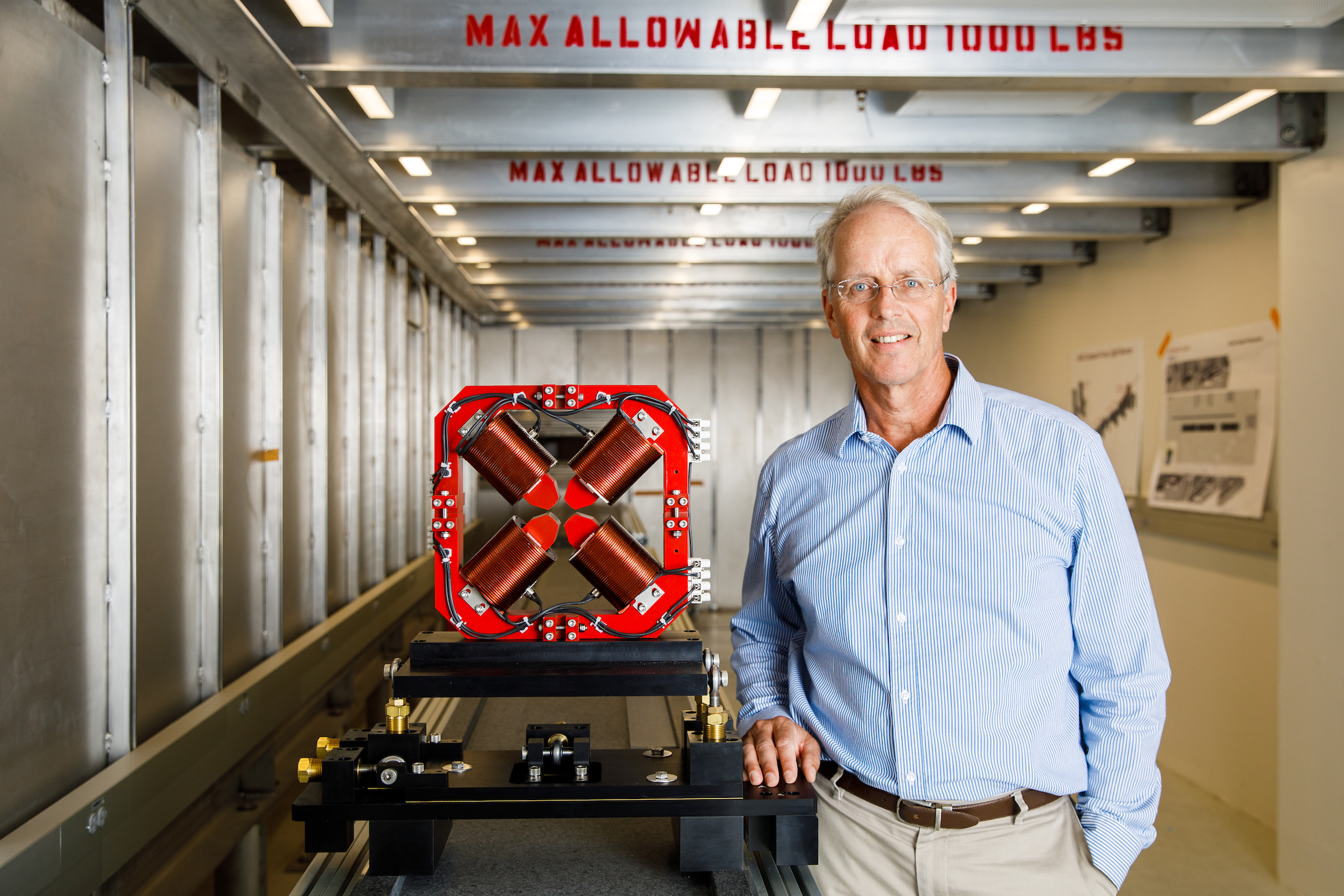 Today, The National Science Foundation (NSF) announced it is supporting the project with a $4.7 million grant to advance the audacious undertaking, funding a comprehensive design study of the new device.

“What we’re building here is called an XFEL, which stands for X-ray free electron laser,” says Graves, a researcher in the Biodesign Center for Applied Structural Discovery Associate Professor of Physics at ASU.

Such lasing occurs when electrons emit coherent light, where all the light waves are in phase with each other. The pulses of laser light produced by XFELs are about a billion times as bright as conventional X-rays and can be produced in lightning-fast bursts lasting on the order of femtoseconds or less. (A femtosecond is a millionth of a billionth of a second.)

In recent years, ASU has earned a reputation for daring and futuristic research. It has just been awarded the title of Most Innovative University for the fifth straight year by US News and World Report. The CXFEL is a prime example of this uncompromising spirit of scientific inquiry.

“This instrument truly represents a sea change in many diverse fields of research. My own area of proteomics or protein research is but one such domain, where the CXFEL will offer powerful insights into the detailed structure of these molecules, which are vital for virtually all biological processes and major players in disease.”

“But what really excites me,” LaBaer says “is the CXFEL’s unique capacity to examine what biology has been doing at speedy time scales that have remained hidden from science until now, from the behavior of viruses and other pathogens to protein binding events occurring at the atomic scale. We will now be able to produce high-resolution movies of these dynamical processes, and that’s really just the beginning of the new scientific frontiers open to us. Molecular science, medical imaging science and materials science will never be the same.”

An intimate view of nature

It turns out that such brilliant X-rays dispersed in femtosecond flashes can act like a hi-def camera on steroids, revealing previously unseen phenomena, including the elusive dynamics of proteins, which have profound implications in the study of multiple disease and the design of more effective drugs.

Conventional XFELs however, come with a big catch: the price tag. “They cost $1 billion or more each. There are now five in the world—about one per continent,” Graves says. These complex and gargantuan machines, like the Linac Coherent Light Source at Stanford University, are a mile or more in length. The Stanford instrument sits on a massive 426 acre plot at its home in California. “It takes hundreds of people and $100 million a year to operate and run one of these things.”

This is where the C in ASU’s CXFEL comes in. The Compact X-ray Free-electron Laser under construction at Biodesign accomplishes most of the same scientific feats as the large XFELs in a laboratory-sized instrument 100 times less expensive to build and operate. In fact, as Graves notes, the CXFEL complements the huge XFELs as a more precise tool, while the big ones have more powerful beams.  Graves compares the CXFEL to a scalpel instead of a hammer.

The grant is part of the NSF’s Big Ideas initiative, specifically its mid-scale research infrastructure program, designed to fund “everything from major observatories to nationwide sensor networks to smaller experiments,” and will complement work already underway by Graves’ ASU colleagues, including Petra Fromme, the Paul V. Galvin Professor of Molecular Sciences, and director of the Biodesign Center for Applied Structural Discovery and John Spence, the Richard Snell Professor of Physics at ASU. Professors Fromme and Spence have pioneered ultrafast X-ray science at the big XFELs under another NSF grant known as BioXFEL, applying the technology to the study of biological phenomena.

“Petra and John saw what I was working on at MIT and brought me here to implement this project,” Graves says. “ASU said, ‘we want to do that,’ and here we are doing it. We’ve made great strides and are turning on the prototype Compact X-ray Light Source in early 2020.

XFELs represent a truly revolutionary advance for many kinds of scientific research and have been particularly fruitful in unlocking atomic-scale dynamics of proteins and other biomolecules—a domain in which Fromme and Spence have both made major contributions. Having such a device on campus is a dream come true for such researchers and something that would have been unthinkable a short time ago, when scientists around the world had to hustle for precious beam time for their experiments at a handful of large facilities like SLAC.

With a generous $10 million contribution from Annette and Leo Beus to create the Beus Compact X-ray Free Electron Laser Lab, Graves’ exhilarating vision has become a reality. Since the grand opening of Biodesign C in the fall of 2018, Mark Holl, deputy director of CXFEL, has led construction of the equipment in state-of the art labs expressly designed to accommodate the new CXFEL.

How do XFEL devices produce their ultrafast, brilliant X-rays? It starts with the riverlike flow of the famous free electrons. In the large machines, the electrons are accelerated to near light speed through vast tunnels like the two-mile tube at the SLAC National Accelerator Lab at Stanford University. During the course of their flight, the electrons are fed into an undulator—a series of powerful magnets of alternating polarity. As the electrons jiggle up and down under the magnetic field, they emit intense X-rays.

One of the key innovations that allows the new device to be radically reduced in size is the replacement of the undulator magnets. In the compact X-ray light source or CXLS—the initial phase of the project—the job of jiggling the electrons and inducing them to emit X-ray light is accomplished with an infrared laser, which reduces the size of the undulator by about 10,000 times and the size of the accelerator by 100 times.

A further breakthrough is required for the transition from CXLS to CXFEL, which involves taking disorganized bunches of electrons and converting them into a precise arrangement or nanopattern. “They’re just a blob of about a billion electrons and we need to sort them into very small bins. These bins are each about the size of an atom,” Graves says. “And through the sorting technique that we do using electron diffraction, we’re able to greatly increase the power and the coherence of the x-rays that are emitted.”

The new NSF Big Ideas grant carries the project forward through four areas of investigation. The first involves detailed simulation in design, physics and engineering of the instrument. The remaining three areas are focused on applications of the new device for advanced science.

“These awards represent the first in NSF’s agency-wide effort to support the mid-range infrastructure that will be invaluable to strengthening the U.S. scientific research enterprise,” said Jim Ulvestad, National Science Foundation chief officer for research facilities. “The funded projects include an impressive collection of new design efforts and advanced instrumentation. These projects fill gaps and provide unique research capabilities for the U.S that will engage many early-career scientists and engineers in the pursuit of ground-breaking discoveries.”

The first application is in attosecond physics, which examines how molecules connect with each other and the dynamics of chemical reactions and catalysis. Attosecond dynamics are the fastest processes in nature and also have important implications for industry.

Another area is in quantum materials, a new frontier involving very subtle effects in materials at the quantum level that cause them to display unique characteristics and behavior. Such research could eventually lead to the development of superconductivity at room temperature, which could have a profound effect on energy use and contribute to the development of quantum computing. The CXFEL is a precise probe for such investigations.

The third and the most important area for ASU research is Petra Fromme’s realm of expertise, known as time-resolved biochemistry. This involves the subtle interplay between biological and chemical processes. “Perhaps the best example of this is photosynthesis,” Graves says. “We don’t quite understand yet how that works. How does a plant absorb a photon from the sun and then transfer that energy into electric and chemical energy? We have some idea of the steps, but we’ve never been able to map them out. They happen at femtosecond and sub- femtosecond levels. And we think that with this probe, we’ll be able to finally successfully unravel that.”

In addition to the power of the CXFEL for uncovering new science, the compact dimensions will allow the technology to go where it is needed, at universities, institutions and hospitals. One application of the CXFEL, for example, is for phase contrast medical imaging, capable of examining soft tissues in the body, including malignancies, with unprecedented resolution. ASU is currently in collaboration with Mayo Clinic to study and apply phase contrast imaging for next-generation diagnosis of disease.

The gathering of leading researchers from around the world will explore pioneering efforts to observe molecules in action, including XFEL technology.

The National Science Foundation (NSF) is an independent federal agency that supports fundamental research and education across all fields of science and engineering. In fiscal year (FY) 2019, its budget is $8.1 billion. NSF funds reach all 50 states through grants to nearly 2,000 colleges, universities and other institutions. Each year, NSF receives more than 50,000 competitive proposals for funding and makes about 12,000 new funding awards.