Cal-1, the company’s lead therapeutic candidate, is a gene-based therapy engineered to control HIV infection and to protect individuals with HIV from progressing to AIDS. The therapy is currently being evaluated in Phase I/II studies. Cal-1 is designed to reduce production of CCR5, a protein on the surface of white blood cells that plays a critical role in enabling HIV to infect cells. It also has a second mechanism aimed at preventing viral fusion, the process by which the virus enters the cell. This dual approach was shown to be effective against broad strains of HIV in pre-clinical studies.

In clinical trials for Cal-1, volunteers with HIV are infused with their own blood stem cells as well as mature T cells that have been treated with Cal-1. By reducing CCR5 expression and preventing HIV viral fusion, Cal-1 may protect the treated cells against HIV and has the potential to provide a continuous means of controlling HIV after a single treatment. The initial study sites are Quest Clinical Research in San Francisco and The UCLA CARE Center.

“Calimmune has assembled a world-class team and a comprehensive technology arsenal that harnesses the power of gene therapy to combat HIV and potentially a wide range of challenging diseases,” said Peter Kolchinsky, Ph.D., managing partner at RA Capital. 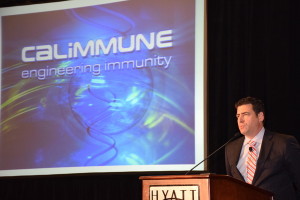 “We are inspired by the support of such a high-caliber group of investors who share in our vision to provide enduring, perhaps lifelong, benefits to patients whose daily lives are severely compromised by currently incurable devastating diseases,” said Louis Breton, chief executive officer of Calimmune. “Over the past several decades, HIV/AIDS has shifted from a deadly disease to one that can largely be managed with medication. The next logical step in the evolution of HIV/AIDS patient care is finding a cure by enhancing the body’s own defenses.”

The primary objectives of the Phase I/II trial for Cal-1 are to assess safety, determine the ease of use and feasibility for individuals living with HIV, and evaluate what, if any, side effects may exist. 2

According to the World Health Organization, some 35 million people are living with HIV/AIDS worldwide. In the United States, the number of people living with HIV/AIDS exceeds 1.2 million. Infection with the human immunodeficiency virus (HIV) can lead to acquired immunodeficiency syndrome (AIDS), a disease that severely impairs immune function and leaves the body vulnerable to numerous secondary infections and complications.

Calimmune Inc. is a clinical-stage biotechnology company focused on developing novel gene therapies that have the potential to improve and protect the lives of patients by enhancing their immune systems. The company was founded in 2006 from technology developed in the labs of Nobel Laureate David Baltimore, Ph.D. (California Institute of Technology), Irvin Chen, Ph.D. (University of California, Los Angeles) and Inder M. Verma, Ph.D. (Salk Institute for Biological Studies). Calimmune’s lead product candidate for HIV, now in Phase I/II studies, is being evaluated as a one-time treatment to prevent HIV progression to AIDS. Calimmune is developing a full product pipeline of therapeutic candidates to address the unique needs of individuals at different stages of HIV infection and with various treatment histories. The company is headquartered in Tucson, Arizona with labs and branch offices in Pasadena, California and Sydney, Australia.