The American Academy of Neurology and The ALS Association awarded the 2015 Sheila Essey Award to Robert P. Bowser, Ph.D., from Barrow Neurological Institute in Phoenix, Arizona, and Adriano Chio, M.D., F.A.A.N., from the University of Turin, Italy. The award recognizes significant research contributions in the search for the cause, prevention of and cure for amyotrophic lateral sclerosis (ALS). 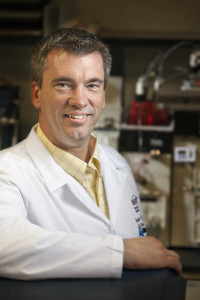 The 2015 Sheila Essey Award  was conferred at the American Academy of Neurology’s 67th Annual Meeting in Washington, D.C., April 18 to 25, 2015. The Annual Meeting is the world’s largest gathering of neurologists with more than 12,000 attendees and more than 2,500 scientific presentations on the latest research advances in brain disease.

The $50,000 prize is given to continue ALS research. ALS is a progressive neurodegenerative disease that affects nerve cells in the brain and the spinal cord. Eventually, people with ALS lose the ability to initiate and control muscle movement, which often leads to total paralysis and death within two to five years of diagnosis. For unknown reasons, veterans are approximately twice as likely to develop ALS as the general population. There is no cure, and only one drug approved by the U.S. Food and Drug Administration (FDA) modestly extends survival.

“The ALS Association is proud of the work performed by both Drs. Bowser and Chio to advance the search to identify biomarkers and mechanisms of ALS,” said ALS Association Chief Scientist Lucie Bruijn, Ph.D., M.B.A.  “Their accomplishments should help us in the effort to find truly effective treatments and ultimately a cure.”

Dr. Bowser is receiving the award for his research on identifying ALS biomarkers in the blood and cerebrospinal fluid of ALS patients. Biomarkers are anything that can be measured and used to determine a change in a person as a result of a disease. They can also help measure a disease’s progression. “We have discovered a protein biomarker signature that distinguishes ALS patients from non-ALS patients,” said Dr. Bowser. “The findings are helping us discover new ways by which ALS may initiate, and new targets to develop drugs to treat ALS patients.”

“I am truly honored to be a recipient of this year’s Shelia Essey Award for ALS Research,” Dr. Bowser added.  “It is a privilege to be included with my many esteemed colleagues that have won this prestigious award in the past, and I remain committed to my research efforts to help define the pathophysiology of ALS and find improved drug treatments for ALS.”

For his award-winning work, Dr. Chio established the Piedmont registry to document and track many aspects of ALS, including genetic and environmental risks, progression, and survival rates. In particular, he was among the first to describe the increased risk of ALS among Italian soccer players and the potential risk that physical activity and traumas may play in a person’s risk of the disease. “The Piedmont registry has shown us that ALS is not simply one disease, but rather it is a collection of diseases that look the same, which is a major step forward in our efforts to develop personalized treatment and effective medications to slow down the disease,” Dr. Chio said. “I am greatly honored and thankful to receive the Sheila Essey Award. The award is a strong motivation to proceed with even more dedication toward the goal of a world without ALS,” he added.

Funding of the award is made possible because of the generosity of The Essey Family Fund, through The ALS Association Golden West Chapter, in memory of Sheila Essey, who battled ALS for 10 years and died from the disease in 2004. Richard Essey, Sheila’s husband, served as a National Trustee of The ALS Association and is one of the founders of the Greater Bay Area Chapter, now the Golden West Chapter.

About The ALS Association
The ALS Association is the only national non-profit organization fighting Lou Gehrig’s Disease on every front.  By leading the way in global research, providing assistance for people with ALS through a nationwide network of chapters, coordinating multidisciplinary care through certified clinical care centers, and fostering government partnerships, The Association builds hope and enhances quality of life while aggressively searching for new treatments and a cure.  For more information about The ALS Association, visit our website at www.alsa.org.