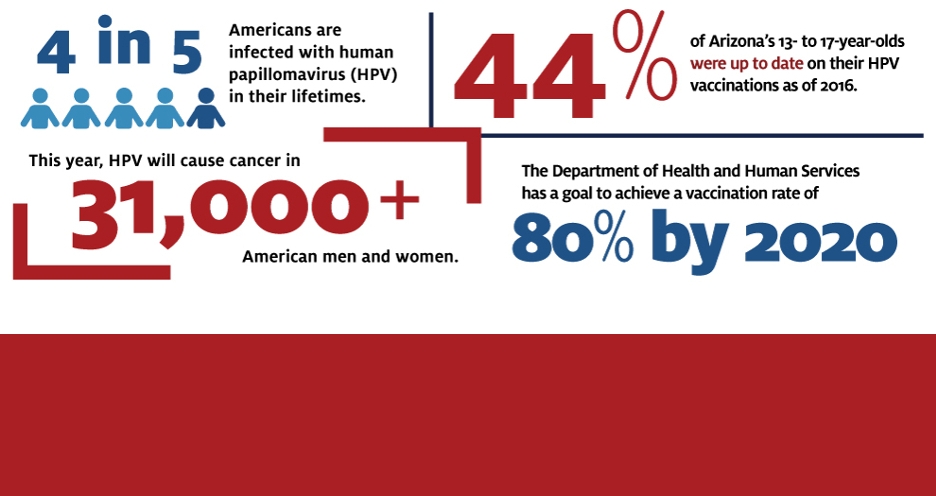 Nearly 80 million Americans — 1 of every 4 — are infected with human papillomavirus (HPV). Of those millions, more than 31,000 will be diagnosed with an HPV-related cancer this year. Despite those staggering figures, HPV vaccination remains low in the United States.

In response, the University of Arizona Cancer Center has partnered with 69 other National Cancer Institute (NCI)-designated cancer centers to issue a statement urging for increased HPV vaccination and screening to eliminate HPV-related cancers, starting with cervical cancer. These institutions collectively recognize insufficient vaccination as a public health threat and call upon the nations’ physicians, parents and young adults to take advantage of this rare opportunity to eliminate several types of cancer in men and women.

“To accomplish this goal, we need to utilize our most important tool — HPV vaccination,” said Anna R. Giuliano, PhD, director of the Center for Infection Research in Cancer at Moffitt Cancer Center. “We are asking health-care providers to stand with us and recommend the HPV vaccine. Parents can join with us by asking their doctors about vaccination.”

HPV vaccination rates remain significantly lower than other recommended adolescent vaccines in the United States. According to the Centers for Disease Control and Prevention (CDC), as of 2016 only 44 percent of Arizona’s 13- to 17-year-olds were up to date on their HPV vaccinations, which is only slightly higher than the national average of 43 percent. These rates fall short of the Department of Health and Human Services’ goal to achieve an 80-percent vaccination rate by 2020.

Lack of awareness that the HPV vaccine provides protection beyond cervical cancer may have led to a disparity in coverage between girls and boys. According to the CDC, less than 50 percent of girls and 38 percent of boys completed the recommended vaccine series.

“HPV-related cancers affect both males and females,” said Julie Bauman, MD, MPH, UA Cancer Center division chief of hematology and oncology. “My experience in Arizona is the HPV vaccine is still largely thought of as a ‘girls’ vaccine.’ Pediatric practices must make sure it’s offered to both girls and boys.”

Authorities recommend vaccinating children for HPV when they are 11 or 12 years old and will develop strong immune responses. Children between 9 and 14 years of age only need two doses, while they will need three doses if they start the vaccination series after their 15th birthday. Because HPV is transmitted by skin-to-skin contact, it is important that children be vaccinated before engaging in any sexual activity.

Research reveals a number of barriers to overcome to improve vaccination rates, including a lack of strong recommendations from physicians and parents not understanding that this vaccine protects against several types of cancer in men and women. Other barriers could include the number of doses in the vaccination series and stigma surrounding HPV.

“Some parents are wary of vaccinating their young children against a sexually transmitted virus, but research has shown that vaccination doesn’t affect sexual activity, whereas we have ample evidence that it has led to decreases in HPV infections and precancerous cervical lesions,” said Melissa M. Herbst-Kralovetz, PhD, associate professor at the UA College of Medicine – Phoenix. “Increasing community awareness and parent education regarding the safety and efficacy of this cancer-preventing vaccine is key to maximize vaccination rates.”

“An epidemic of preventable throat cancer in men has been caused by HPV,” said Dr. Bauman. “When I was training, the traditional risk factors were tobacco and alcohol. Suddenly my clinic has been populated largely with men who find themselves with head-and-neck cancer despite not having a significant tobacco or alcohol exposure.”

In Arizona and nationwide, Hispanics have the highest incidence of cervical cancer. In 2014, cervical cancer incidence among Arizona Hispanics was 40 percent higher than that among non-Hispanics — a bigger discrepancy than what is seen nationwide, where cervical cancer rates are 29 percent higher among Hispanics.
“The higher rate of cervical cancer in our Hispanic population shows that we must do a better job educating people about prevention,” said Jorge Gomez, MD, PhD, associate director of the UA Center for Elimination of Border Health Disparities and the UA Cancer Center’s assistant director for cancer outreach. “Parents must be made aware of a lifesaving vaccine that is available for their children.”

As a group, Native Americans have higher cervical cancer mortality than the general population, which has been attributed to lower access to cancer screening. Nationwide, Native Americans have an HPV vaccination rate that is similar to that of the general population, but some communities are leading highly successful vaccination campaigns. For example, on the Navajo Nation, the Chinle Indian Health Service boasts an HPV vaccination rate that exceeds 80 percent.

This is the third year that all NCI-designated cancer centers have come together to issue a national call to action. All 70 cancer centers unanimously share the goal of sending a powerful message to parents, adolescents and health-care providers about the importance of HPV vaccination for the elimination of HPV-related cancers.

“We have an amazing opportunity for our children and community with the HPV vaccination to virtually wipe out a large portion of HPV-related cancers in both men and women,” said Dr. Herbst-Kralovetz.

“Cervical cancer at this point should not even exist,” added Dr. Gomez. “It should not be in our communities.”