Phoenix’s VisionGate Inc  has raised $2 million in the first portion of equity financing raised from existing and new investors. The company has developed a non-invasive test for the early detection of lung cancer using 3D cell imaging from a single sputum sample. END_OF_DOCUMENT_TOKEN_TO_BE_REPLACED

As seen on the 360 Vantage Blog

Our sincerest thanks to Joan Koerber-Walker, CEO of AZBio, and her entire team for their outstanding leadership in putting

together last week’s AZBio EXPO and Awards Dinner. This annual event
was truly the state’s premier gathering of innovators and leaders in the  bioscience community, and we were extremely honored to participate.  Clearly, these leaders are moving the biotech industry forward faster —  using their unparalleled passion and expertise to advance research in new ways that will change lives and leave a lasting legacy. END_OF_DOCUMENT_TOKEN_TO_BE_REPLACED

Stephen J. Ubl, president and CEO of the Advanced Medical Technology Association (AdvaMed), released the following statement today upon the introduction of the “Saving
American Jobs and Saving American Patients” legislative package in the U.S. House of Representatives that would reform the FDA device review process: END_OF_DOCUMENT_TOKEN_TO_BE_REPLACED

— EmpowHER, an award-winning social health company for women, was honored with the AZBio Fast Lane Award presented by the Arizona Bioindustry Association (AZBio), the state’s leading trade association for organizations involved in the biosciences. The Fast Lane Award recognizes companies and organizations in the healthcare and health information fields that through recent innovations have yielded measurable results that are moving their organizations and the state of Arizona forward faster. END_OF_DOCUMENT_TOKEN_TO_BE_REPLACED 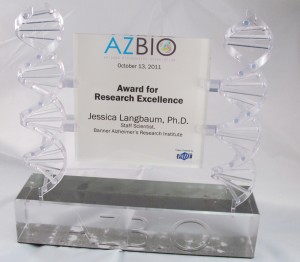 The Arizona BioIndustry Association announced the leaders and innovators who are moving the Arizona biosciences industry forward faster at the 2011 AZBio Awards on October 13, 2011 in front of a standing room only crowd.  Winners include: Dr. Nadja Anderson of the University of Arizona BIO5 Institute, 2011 Michael A. Cusanovich Educator of the Year, SynCardia Systems, Inc.,  as the 2011 Arizona Bioscience Company of the Year, Dr. Robert Penny  of the International Genomics Consortium as  Jon W. McGarity Bioscience Leader of the Year , Dr. Jessica Langbaum of the Banner Alzheimer’s Institute as 2011 Arizona Bioscience Researcher of the Year, and Greg Stanton as the winner of the 2011 Public Service Award. END_OF_DOCUMENT_TOKEN_TO_BE_REPLACED

MSDx announced today the first of a series of blood testing products that provide novel tools for studying disease processes. Today the company is introducing The NK Cytolytic Competence Assay (Human CD16/Perforin) Flow Cytometry Kit, a Research Use Only (RUO) kit, which has wide-ranging potential for research in multiple sclerosis, rheumatoid arthritis, type 1 diabetes and many other disease areas. END_OF_DOCUMENT_TOKEN_TO_BE_REPLACED

An overview of the United States, European and Global medical technology industry with performance metrics and analysis of the context within which the industry operates. Demographic, regulatory, macro-economic and expanding non-traditional markets create a need for innovative approaches to developing better medical technologies going forward. Click to download >>  END_OF_DOCUMENT_TOKEN_TO_BE_REPLACED