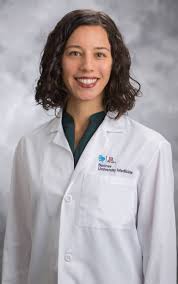 Endometriosis awareness takes places during the month of March to raise awareness of the 200 million women worldwide impacted by the disease.

Endometriosis is a hormonally mediated chronic inflammatory condition in which tissue from inside the uterus is found outside the uterus, most commonly on the uterus, ovaries and tissue lining the abdomen.

What are the most common symptoms?

How is endometriosis diagnosed?

What are a few examples of conditions and symptoms that are not caused by endometriosis, but associated with it?

Among women who have endometriosis and chronic pelvic pain, the pelvic pain may be also can be related to the GI tract, pelvic floor and abdominal wall muscles, and the nerves. We know that women with endometriosis and pain also more commonly have other conditions such as migraines, fibromyalgia, IBS and interstitial cystitis.

As a patient who suspects they have endometriosis, are there steps they can take or information they can give their doctor that may help with a diagnosis?

It is always a great idea to track your symptoms so patients can discuss this with their doctor. For example, keep track of when the pain started, was it associated with any other events, life changes, injuries, etc. What makes the pain worse or better? Is the pain associated with GI or urinary symptoms?