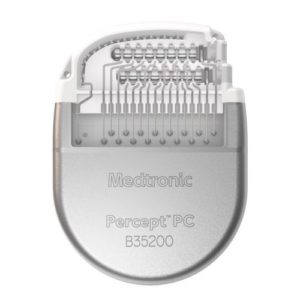 Mayo Clinic in Rochester, Minn., will be the first in the United States to implant the newly approved device. “Our goal is for patients to regain independence, and we know that DBS can significantly improve motor function in people with Parkinson’s disease compared to standard medication alone,” said Bryan Klassen, M.D., neurologist, Mayo Clinic. “We can now more precisely tailor therapy to the individual needs of each patient based on data from neuronal activity.”

DBS is an individualized therapy delivered from a small pacemaker-like device, placed under the skin of the chest or abdomen, to send electrical signals through very thin wires (leads) to a targeted area in the brain related to the symptoms of a neurological disorder, such as Parkinson’s disease.

“With movement disorders like Parkinson’s disease, even sharing a meal and holding utensils can be a challenge,” said John L. Lehr, president and chief executive officer of the Parkinson’s Foundation. “We’re excited by new treatments and clinical advancements that let people with Parkinson’s live fuller, more complete, lives.”

The only DBS system eligible for 3T and 1.5T full-body MRI scans, providing patients access to cutting-edge medical imaging
Smart battery for personalized prediction of remaining battery life providing elevated peace of mind while planning for device replacement
Improved battery longevity compared to Medtronic’s Activa™ PC neurostimulator (when using similar settings and functionality) in a smaller (reduced volume), ergonomic design for patient comfort
Low pulse width (duration of the pulse), providing expanded stimulation options
Enhanced Patient Programmer leveraging a user-friendly, custom-configured Samsung mobile device that allows patients to manage their therapy easily
Designed to facilitate expanded capabilities in the future via software upgrades – to prepare for what’s next in DBS
“There is nothing that can replace clinical judgement in treating patients. For the first time, this technology gives clinicians feedback directly from the DBS patient’s brain,” said Mike Daly, vice president and general manager of the Brain Modulation business, which is part of the Restorative Therapies Group at Medtronic. “With such data-driven, patient-specific insights, we believe it can change the standard of care.”

About Medtronic DBS Therapy
DBS therapy is currently approved in many locations around the world, including the United States and Europe, for the treatment of recent and longer-standing Parkinson’s disease, essential tremor, primary dystonia, the disabling symptoms of epilepsy and treatment-resistant obsessive-compulsive disorder.

DBS therapy uses a surgically implanted medical device, similar to a cardiac pacemaker, to deliver electrical stimulation to precisely targeted areas of the brain as adjunctive treatment for several neurological disorders. Medtronic was the first in the United States to offer full-body MR Conditional DBS systems for patients to have safe scans anywhere on the body under certain conditions. Since 1987, more than 175,000 Medtronic DBS devices have been implanted worldwide for movement disorders and other indications.

About Medtronic
Medtronic plc (www.medtronic.com), headquartered in Dublin, Ireland, is among the world’s largest medical technology, services and solutions companies – alleviating pain, restoring health and extending life for millions of people around the world. Medtronic employs more than 90,000 people worldwide, serving physicians, hospitals and patients in more than 150 countries. The company is focused on collaborating with stakeholders around the world to take healthcare Further, Together.

Any forward-looking statements are subject to risks and uncertainties such as those described in Medtronic’s periodic reports on file with the Securities and Exchange Commission. Actual results may differ materially from anticipated results.