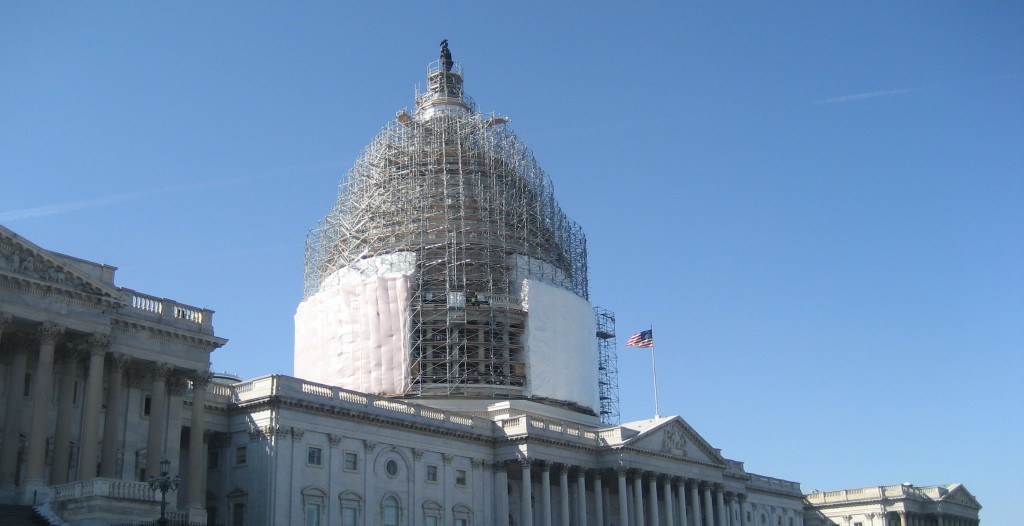 The Capitol Dome is not the only thing that needs to be worked on in Washington this summer.  H.R. 9: The American Innovation Act needs significant fixes to protect innovators, investors, and the mission critical protections that are the foundation of our patent system.

AZBio Members include all of Arizona’s Research Universities, life science research institutes, major hospital systems, as well as innovative Arizona companies in the areas of industrial biotech, medical devices, health IT, and pharmaceutical and biologics manufacturing.  These are the innovators working to bring life-changing and life-saving innovations to market in our state and driving the growth of healthy companies and high paying jobs.

A strong U.S. Patent framework is the foundation of innovation. H.R. 9- The Innovation Act weakens this foundation and puts American Innovators at risk.

Weakening our patent system also creates a higher level of risk for the investors we rely on to fuel innovation. As we have discussed in the past, access to capital is one of the highest hurdles that our Arizona innovators face.  H.R. 9 raises that hurdle higher and will slowdown Arizona life science innovators.

To be clear, we all want to stop the abhorrent behavior of so-called “patent trolls” and we are cheering the work in the courts that is doing just that.  H.R.9 is not the answer. Rather  targeted reforms designed to rein in abusive patent practices are needed and  must be balanced and preserve the patent-based incentives necessary to sustain our nation’s global leadership in biotechnology innovation; the creation of high-wage, high-value jobs throughout our country; and the ability to bring lifesaving and life-enhancing products to market.

H.R. 9 does not create that balance. It also has changed in significant ways since it was last voted on by Congress, in ways that raise a host of new issues that warrant careful consideration.

The patent landscape also has changed in significant ways since patent litigation reform was last voted on by Congress – with both the PTO and the courts making changes that have made it harder for patent trolls to abuse the system and easier for the victims of patent trolls to invalidate those patents, leading to a substantial decline in patent lawsuits over the past year.  By making more changes to benefit accused infringers, H.R. 9 would go too far in skewing the system against all patent owners, not just patent trolls.

Additionally, H.R. 9 does not sufficiently address the serious abuses that have arisen with the PTO’s inter partes review (IPR) system to challenge patents – by reverse patent trolls who are taking advantage of the IPR system’s clear bias against patents to extort payments from patent owners or otherwise financially gain.

IPR was created in the America Invents Act of 2011. The process was meant to be a faster and cheaper alternative to district court, but it has now become a forum with much higher rates of invalidation of patents than the courts because it uses lower and easier standards.

An immediate problem is that the inter partes review (IPR) process at the U.S. Patent and Trademark Office (PTO), which is intended to provide a faster and cheaper process for people to challenge patents, is being abused by outside interests, including hedge funds, seeking to undermine and exploit it for short-term financial gain.

Predatory hedge funds are short-selling the stock of patent-dependent companies, then challenging the companies’ legitimate patents at the PTO to rattle the stock market, and then attempting to profit from a resulting drop in the companies’ stock price.

An egregious example is the hedge fund manager who recently filed IPR challenges to the patents held by Acorda Therapeutics, a small biotech company that developed and brought to market a new treatment that improves multiple sclerosis patients’ mobility. After the first IPR challenge to Acorda, investors lost more than $150 million in value, and the stock has yet to recover.

This kind of destructive behavior has a profound chilling effect on industries powered by private investment. And because biopharmaceutical companies use the capital they raise on public markets to finance their clinical trials and research, allowing the IPR process to be abused in this manner could freeze the future search for new cures and therapies that American patients need and deserve right now.

IPR challenges threaten to undermine the unique and specialized patent challenge procedures that Congress has put in place to bring generic and biosimilar pharmaceutical products to market. Under the Hatch-Waxman Act and the Biologics Price Competition and Innovation Act (BPCIA), Congress crafted a carefully calibrated system that ensured the continued development and introduction of new and innovative medicines and, at the same time, facilitated the timely introduction of generic and biosimilar medicines. This system has worked well for over 30 years. Because IPR challenges arise outside these carefully designed legal regimes, they threaten to disrupt the delicate balance that has served patients so well.

When Congress created the IPR process as part of the America Invents Act of 2011, it never intended for IPR to be used to kill valid biopharmaceutical patents covered under Hatch-Waxman and the BPCIA in a way that would discourage future investments in new medicines. Yet, that is precisely how IPRs are being misused today.

Specific to  Drugs and biologics there are  separate and unique systems for patent dispute resolution. Congress enacted the Drug Price Competition and Patent Term Restoration Act (commonly referred to as Hatch-Waxman) and the Biologics Price Competition and Innovation Act of 2009 (BPCIA), both of which reflect a delicate balance of interests between promoting innovation and lower-cost generic entry, and both of which contain highly detailed schemes for raising, and litigating as necessary, disputes over relevant patents.  The IPR process is undermining these processes by allowing generic companies or even hedge fund managers to game the differential standards between the two systems and forum shop as to which patents to challenge under which system. Given the lower standards of IPR, the gaming of the two systems is undermining the confidence of biotechnology investors and businesses who must be able to rely on the government’s issuance of patent rights to justify the massive investment, over a decade or more, in developing the next generation of innovations.

Examples of letters opposing H.R. 9 can be accessed here (http://innovationalliance.net/wp-content/uploads/2015/06/Letters-and-Statements-on-HR-9_062615-tc.pdf) and include statements from: