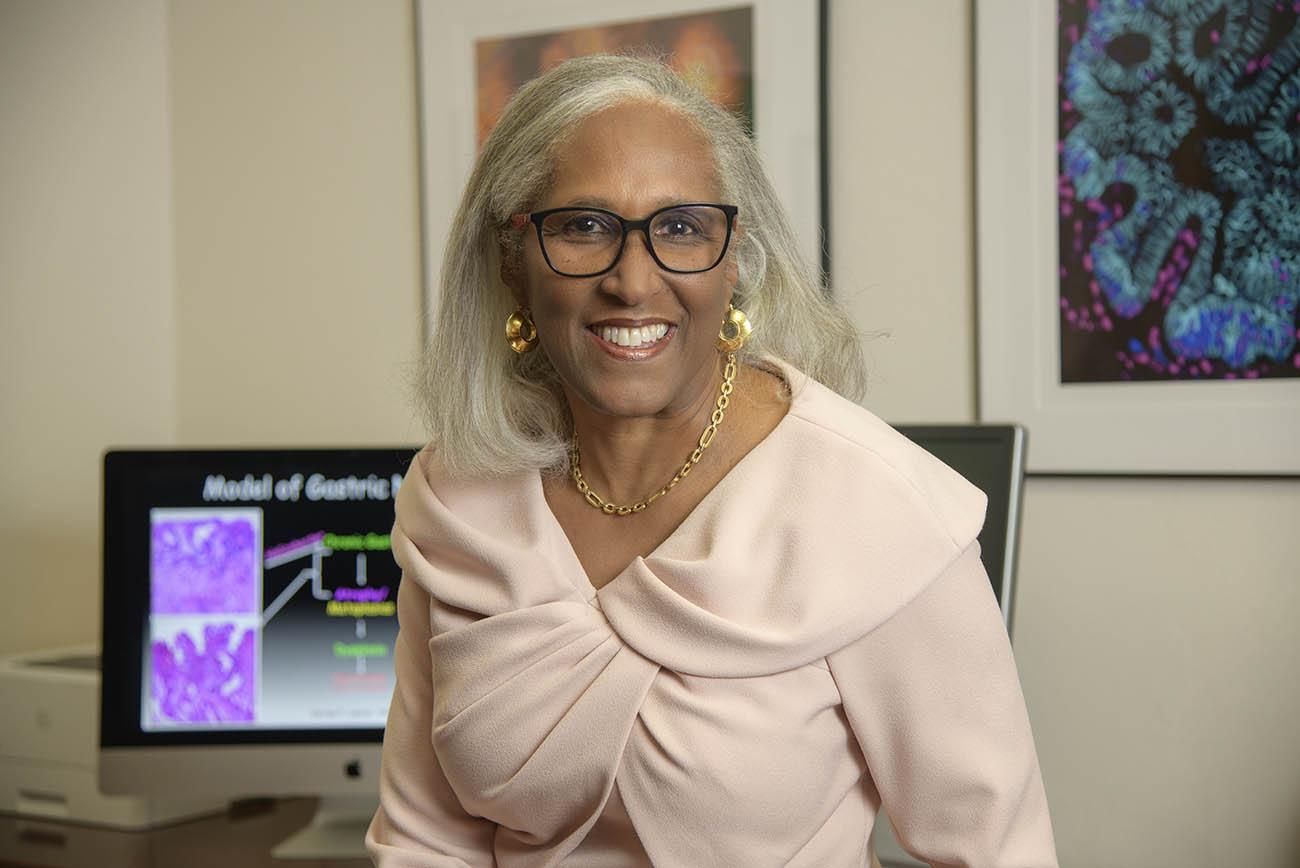 Juanita L. Merchant, MD, PhD, is a Regents Professor of Medicine, chief of the Division of Gastroenterology at the College of Medicine – Tucson and a member of the UArizona Cancer Center.The National Cancer Institute cites infection with H. pylori as the primary identified cause of certain types of stomach cancer. H. pylori is a bacterium that grows in the mucosa, or membrane layer that lines the stomach.

“This study is proposing that if you are carrying this particular allele, you are more likely to have an aggressive type of response to the bacteria that can result in complications,” said the study’s senior author, Juanita L. Merchant, MD, PhD, Regents Professor of Medicine and chief of the Division of Gastroenterology at the UArizona College of Medicine – Tucson.

In the United States, H. pylori is more prevalent in Hispanics, African Americans and the elderly. Dr. Merchant cited data suggesting that 1-3% of people with H. pylori will develop gastric cancer and that the cure rate is around 30%, which is low compared with some other types of cancer.

Current diagnosis of stomach or gastric cancer requires the patient to undergo an upper endoscopy, where a doctor looks for signs of cancer and takes a tissue sample for analysis.

For years, Dr. Merchant and colleagues have been investigating new ways to diagnose stomach cancer in its earliest possible stages. In 2020, they published research on a promising biomarker that appears in some patients before stomach cancer develops.

The new study focused on the molecular pathways that control the activation of immune cells in response to H. pylori infection, specifically the action of toll-like receptor 9 (TLR9).

Located within immune cells, TLR9 signals the immune system when to fight an infection. However, H. pylori infection can constantly trigger TLR9 activation over long periods of time, leading to the chronic inflammation. The long-term presence of inflammation caused by H. pylori infection is believed to be one of the triggers for cancer developing in the stomach.

“This addresses the question of what role the immune microenvironment has in gastric cancer,” said Dr. Merchant, who is a research member of the UArizona Cancer Center. “We have shown that these immune cells do play an important role.”

Researchers found that the chronic activation of TLR9 in the stomach triggers a series of events that includes increased production of interferon α, a signaling protein that can change the genetic signature of specialized immune cells known as myeloid-derived suppressor cells, or MDSCs. Prior research has linked MDSCs with H. pylori infection.

Dr. Merchant and her team focused on each step of the pathway and identified a specific genetic change – allele rs5743836 TLR9 minor C – that was linked to higher levels of TLR9 and interferon α and a greater incidence of gastric tumors. The allele is a single nucleotide polymorphism, or SNP, which is a genetic change in the DNA between genes.

“Because TLR9 and the SNP can be tested by DNA, they could be used as biomarkers to help us identify which patient populations are going to be more susceptible to the cellular changes that might lead to cancer based on their genetic background,” Dr. Merchant explained. “Those are the patients who could benefit from increased endoscopic surveillance.”

Eventually, the findings may also lead to new therapeutic options for patients.

“We have previously found a real-time biomarker in a blood test, and now we have something we can see in DNA,” Dr. Merchant said. “Our next step is to look at therapy options.”