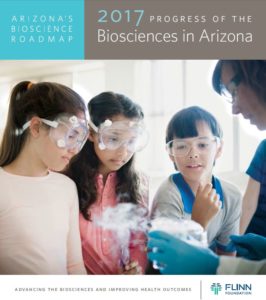 However, the $40 million in bioscience venture capital raised in both 2017 and 2016 was a sharp decline from the last data report released two years ago, despite capital funding increasing nationally.

The Phoenix-based Flinn Foundation commissioned the latest performance analysis as part of its coordination of Arizona’s Bioscience Roadmap, a long-term strategy to guide the state through 2025. The data released in the April 10 report, which includes five industry subsectors and hospitals, was provided by TEConomy Partners, a global leader in research, analysis and strategy for innovation-based economic development.

“Since our last measurement, indicators of Arizona’s overall bioscience industry cluster growth remain strong, while bioscience research performance has recovered from a period of decline and we are continuing to see strong gains in commercialization, including university spinouts,” said Mitch Horowitz, principal and managing director of TEConomy Partners. “These are solid indicators that Arizona is positioned to continue its bioscience momentum and growth in high-paying jobs. But the venture capital performance is a concern.”

The most recent data show:

Setting aside hospitals, Arizona’s 25,686 bioscience jobs are spread across 1,354 establishments with an annual wage of $77,807.

The next data report will be released in 2020.

There were a number of prominent developments in 2017 impacting Arizona’s bioscience sector. The Arizona Legislature passed and Gov. Doug Ducey signed a bill authorizing $1 billion in bonding for new university infrastructure, including the construction or expansion of bioscience research facilities. In addition, the Angel Investment Tax Credit program was recapitalized to allow for $10 million in tax credits over four years for those investing in early-stage bioscience companies. And the Mayo Clinic School of Medicine, a partnership with Arizona State University, welcomed its inaugural class of 50 students to the Scottsdale campus, while the University of Arizona College of Medicine-Phoenix received full accreditation.

Major grants awarded to universities, private research institutions, and consortia—which will be used for studies in such areas as pancreatic cancer, Alzheimer’s disease, tuberculosis, and bioproducts—included $21 million to Northern Arizona University to study health disparities in the Southwest.

“We applaud the strategic investments made by the state of Arizona. We are confident that these new resources will accelerate the growth of early-stage bioscience companies and greatly expand the infrastructure necessary to drive new university research, yielding many more tech-transfer opportunities at all three of Arizona’s universities,” said Ron Shoopman, CEO of Southern Arizona Leadership Council and chair of Arizona’s Bioscience Roadmap Steering Committee. “The net result will be significant growth in Arizona’s innovation economy, bringing high-wage jobs and an improving quality of life in our state.

“Despite the decline in bio-related venture-capital funding in Arizona over the last two years, there is reason for optimism,” Shoopman added. “Arizona has strong networks of angel investors. And increasing the availability of venture capital in Arizona is likely, as several new funds have emerged in the state, and there is growing interest from funds outside the state in investing in more opportunities in Arizona.”

Arizona’s Bioscience Roadmap was commissioned by the Flinn Foundation, a private, philanthropic grantmaking organization, in 2002 with a goal of increasing access for Arizonans to health innovations while diversifying and strengthening the state’s economy. The long-term strategy was updated in 2014 to lead the state through 2025.

The Roadmap’s vision is for Arizona to become globally competitive and a national leader in the biosciences in such fields as precision medicine, cancer, neurosciences, and bioengineering. The Roadmap is guided by Arizona’s Bioscience Roadmap Steering Committee, comprised of more than 100 leaders in science, health care, business, academia, and policy.

“As we move beyond the 15-year mark since the launch of Arizona’s Bioscience Roadmap, our state continues to see the rewards of this strategic plan, built on collaborations and partnerships throughout Arizona. It should offer confidence to policymakers that state investments in the biosciences will be catalysts for both improved health outcomes and economic growth,” said Tammy McLeod, president and CEO of the Flinn Foundation.

The Flinn Foundation was established in 1965 by Dr. Robert S. and Irene P. Flinn to improve the quality of life in Arizona to benefit future generations. In addition to advancing the biosciences, the foundation supports the Flinn Scholarship, a merit-based college scholarship program, arts and culture, and the Arizona Center for Civic Leadership.

View the Roadmap Progress Report brochure and the slides.