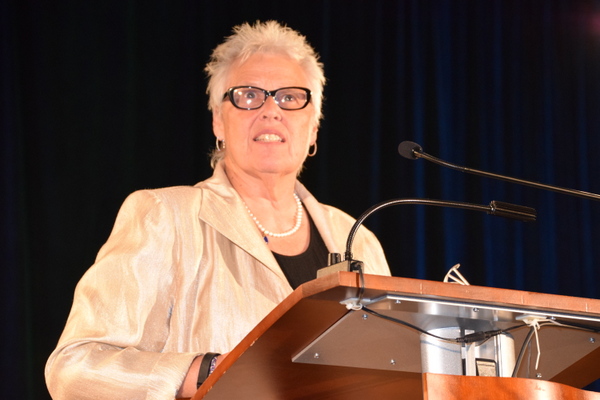 Dr. Loretta Mayer is a founder of SenesTech and co-inventor on the patents that formed the basis for launching SenesTech’s R&D efforts. She has served as Chairman of the Board since 2004 and has served as the Chief Scientific Officer responsible for the quality of Senestech’s research, products, and services since 2009. She is pictured here accepting the AZBio Fast Lane Award in 2014. (Photo by Mark Goldstein, International Research Center.)

Founded by two scientists with a deep love for animals, SenesTech is a biotech platform and research company that has developed an innovative technology for managing animal populations by fertility control. The company develops non-lethal treatments that have the potential to be more effective, more humane, and less invasive to the environment than traditional management methods.

SenesTech’s first product applies its revolutionary technology to a worldwide problem that has persisted since the Middle Ages: the proliferation of rats in both urban and agricultural settings. Using an innovative compound that is readily consumed by rats, SenesTech’s solution leaves the rats  permanently non-reproductive with no other observable side effects. The rodents live out their normal 8-12 month life span without producing offspring. Since rapid reproduction is the root cause of rat infestation, this introduces a new paradigm to the science of pest control.

When used as directed, SenesTech’s  species-specific formulation is environmentally neutral, does not affect non-target animals, and has no impact on human health or fertility.

SenesTech is  currently gearing up for the process of EPA registration, after which it will be available for commercial sale. Meanwhile, recent tests ranging from the New York Subway, the neighborhoods of Metropolitan Boston, and the rice fields in Southeast Asia have yielded promising results. Once their EPA registration is complete, their path to commercialization will be accelerated by strategic partnerships with our major manufacturer, and a leading pest control service provider who is actively seeking an alternative to traditional pest management methods.

The science behind the SenesTech products is well established and shows early promise for the humane control of other pest species from deer to wild pigs. Long-term, there is potential for a SenesTech formulation to become a non-surgical solution for the spaying and neutering of feral cats and dogs.

The 2015 Tibbetts Award recipients will be formally honored in Washington, DC, on June 15 during a White House ceremony featuring keynote speaker Cady Coleman, accomplished scientist and NASA Astronaut noted for her six-month expedition to the International Space Station. Tibbetts Awardees will also be honored at the June 16 kickoff of the National SBIR/STTR Conference where thousands of the best and brightest in the innovation ecosystem convene annually.

“I am so looking forward to celebrating these entrepreneurs who are driving U.S. innovation in diverse and amazing ways across the country,” said Javier Saade, SBA Associate Administrator for the Office of Investment and Innovation. “This will be my second Tibbetts Awards ceremony, and I can honestly tell you, on behalf of the SBIR/STTR family, it is thrilling to be in the company of these visionaries developing and commercializing technologies that strengthen our nation’s defense, improve the health of our citizens, and enhance education.”

Named for the late Roland Tibbetts, widely accredited as being the ‘Father’ of today’s SBIR/STTR programs, the annual Tibbetts Awards are presented to leaders from all over the United States who have been instrumental in supporting the success of the programs and/or utilizing SBIR/STTR investment to develop an ‘idea’ into a product or service that benefits the federal government’s research and development needs, the general public’s wellbeing, and the nation’s economy through technological innovation and the creation of high quality jobs – sometimes in newly created industries.

Hydralonix, Inc. of Green Valley, Arizona will also be a Tibbetts Award receipient for their development of E.M.I.L.Y. – Emergency Integrated Lifesaving LanYard
To see the full list of 2015 Tibbetts Honorees, click here.

About the SBIR/STTR Programs

The SBIR/STTR programs represent the nation’s largest source of early stage research and development funding for small businesses. The programs are administered by the SBA in collaboration with 11 federal agencies, which collectively supported more than $2.5 billion in federal research and development funding in fiscal year 2014. Additional information about each program can be found at www.sbir.gov.

About the National Conference

The SBIR/STTR National Conference is held concurrently with the TechConnect World Innovation Conference and Expo. The largest gathering of its kind, attendees are able to interact with federal agency representatives, industry leaders and veteran SBIR/STTR awardees to learn about accessing and competing for SBIR/STTR investment, building strategic partnerships, and creating commercialization strategies. Additional information on conference opportunities can be found athttp://nationalinnovationsummit.com/program/National_SBIR_Conference.html.