In new research by Cheryl Nickerson and her team at Arizona State University’s Biodesign Institute and external collaborators, a radical approach to addressing the problems of transplantation potential and repairing scarred lungs is under investigation. 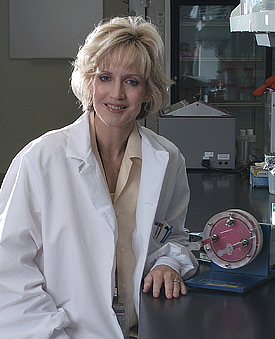 According to the World Health Organization, chronic obstructive pulmonary disease (COPD) currently affects more than 64 million people worldwide and is poised to become the third leading cause of mortality by 2030.

A hallmark of COPD is scarring of the lungs, a condition called pulmonary fibrosis, which impacts breathing. There is no cure for the condition or ability to repair the scarring that has occurred. Thus, in the late stages of lung disease, just one remedy exists: organ transplantation.

Unfortunately, the combination of a severe shortage of donor organs and frequent rejection of the transplant by the recipient’s immune system has made even this method of last resort impractical for many.

In new research by Cheryl Nickerson and her team at Arizona State University’s Biodesign Institute and external collaborators, a radical approach to addressing the problems of transplantation potential and repairing scarred lungs is under investigation.

In work appearing in the advanced online edition of the journal PLOS ONE, the researchers describe an elegant method to improve aspects of lung engineering that may in the future contribute to providing a nearly limitless supply of donor organs, ideally matched to their recipients, or to repairing damaged lungs.  Although years of work and further study remain before such research could be a reality in the clinic, the potential is there and the results in animal studies are promising.

The research team builds upon previous research that involves the removal of cells from the lung of a deceased individual and reseeding the resulting decellularized scaffold structure with stem cells from the lung recipient. The desired future outcome of such work would be a fully functioning lung built from the organ recipient’s own cells, therefore avoiding graft-host rejection. Although current research involves use of animal cells and scaffolds, the potential for translation to the clinic is an area of active research.

The new study, jointly funded by NIH, NASA, and a Mayo Clinic-ASU seed grant, demonstrates a number of critical advantages to conducting the cell re-population process in a dynamic suspension culture, in which the cells are allowed to gently tumble as they re-seed the decellularized lung.

“There is an urgent need for the development of lab engineered lungs from patient stem cells that are suitable for both transplantation and as predictive models for biomedical research to probe the links between cell function and respiratory disease,” said Nickerson. “This was an extraordinarily challenging, but rewarding study that took years to complete, and we are excited that it will contribute to the current and growing body of knowledge in the field with potential downstream implications for regenerative medicine as well as identifying the underlying factors that may contribute to the transition of normal to fibrotic lung disease.”

Aurélie Crabbé, lead author of the new study, (formerly with the Nickerson group and now at Ghent University, Belgium), highlights the tremendous potential for this pioneering strategy:

“Our study demonstrates that reseeding lung scaffolds under dynamic conditions could be beneficial for ex vivo lung engineering,” said Crabbé. “Dynamic culture conditions enhanced cell growth and viability, and stimulated stem cells to differentiate into matrix-producing cells as compared to static conditions – both findings might help rebuilding lungs from acellular scaffolds. Tremendous progress has recently been made on the use of cadaveric lungs as building blocks for the generation of new lungs, and we are hopeful that continued advancements in this field will one day provide a new source of much-needed organs.”

Nickerson and Crabbé were part of a multidisciplinary, multi-institute team, including researchers from the University of Vermont College of Medicine; Department of Biochemistry and Molecular Biology, Mayo Clinic Arizona; and Arizona State University’s School of Life Sciences.

COPD is a lung disease characterized by increasing difficulty in breathing. The disease is progressive; the most common culprit is damage to the lungs caused by cigarette smoking.

The disease usually has two components, chronic bronchitis (an inflammation and partial blockage of the bronchial tubes supplying the lungs with air) and emphysema, (loss of elasticity in the air sacs or alveoli of the lungs, causing shortness of breath). Cigarette smoking irritates the lung tissue and gradually destroys the malleable fibers of the lungs. Air pollution, chemical fumes, dust and secondhand smoke can also cause COPD.

Symptoms of the disease include shortness of breath, tightening of the chest and persistent cough accompanied by mucus.  The underlying cause of these symptoms is scarring of the lungs (pulmonary fibrosis) which damages the lung tissue and cannot be repaired.  Little is known regarding the cause of the scarring.  Symptoms generally worsen with physical exercise. Flare-ups of severe symptoms, known as COPD exacerbation, become more frequent with disease progression and can be life threatening.

COPD is usually diagnosed in middle age. The disease has no cure and in severe cases, the only available medical intervention is organ transplantation. The clinical success of lung transplantation however requires lifelong immunosuppression and chronic rejection of the new organ is common, with patients showing only 10-20 percent survival rate 10 years after transplantation.

To overcome the severe shortage of suitable donor organs and the issue of organ rejection by the recipient’s immune system, a daring new bioengineering strategy is being explored. The idea is to remove the cells from a donor lung extracted from a cadaver, reseed the remaining decellularized scaffold with stem cells from the patient, allow the cells to adhere to the scaffold, grow and mature into the different cell types found in the functioning lung, and transplant the freshly developed, functioning organ in a living organism. While not a reality for humans at this time, if successful in the future, this regenerative medicine approach holds the potential for a paradigm-shifting advance for sufferers of otherwise incurable lung disease.

Currently, the approach is being explored in animal models. The decellularization process is accomplished by sequentially treating lung tissues with specialized detergents, salts, and enzymes. These act to remove the cellular material of the lung, leaving just the stripped down extracellular matrix – a kind of scaffolding on which the new lung will be constructed using stem cells from the recipient.

To date, studies in which decellularized lungs from rodents were recellularized and transplanted showed marginal success in generating functioning pulmonary tissue. Experimental efforts have thus far demonstrated only partial recellularization of alveoli, airways and pulmonary vasculature. While the fundamental approach appears sound, significant hurdles remain before the strategy can be applied to humans.

Stem cells have the remarkable ability to differentiate into virtually any form of specialized cell in the body, when placed in the proper environment. Thus, the premise of the study is that stem cells exposed to the decellularized lung scaffold will take up residence and differentiate into all the specialized cell types necessary for a complete, functioning lung, much as the skeletal frame of a house is gradually dressed with walls, roof, windows and doors.  This is an audacious challenge, given the complexity of the lung, which contains over 50 different cell types.  Accordingly, optimizing the recellularization efficiency of lung scaffolds with stem cells under conditions that mimic the parental tissue environment is critical to coax the cells to multiply and mature into the different respiratory cell types, and to achieve the long term goal of developing functional lungs in the lab that could one day be suitable for transplantation, as well as for building models of diseased or injured lung to understand the underlying mechanisms of why damage is happening.

In an effort to improve lung recellularization, a dynamic rotating wall vessel (RWV) bioreactor was used. In previous research, this cell culture technique has been shown to promote growth and differentiation of stem and epithelial cells. The apparatus provides a continuous suspension of the repopulating cells, which are contained in horizontally rotating cylinders, filled with a nutrient-rich media.

The motion of the RWV bioreactor offsets the natural sedimentation of cells, creating a gentle falling of cells along with their scaffolds contained in the culture medium. The activity mimics natural conditions of fluid shear – the motion of extracellular fluid over cell surfaces, which is believed to help direct proper growth and regeneration.

In the current study, comparisons were made between standard methods of recellularization using cells grown on lung scaffolds under static conditions, and those grown dynamically in a rotating bioreactor.

ASU researchers are working to improve aspects of lung engineering that may in the future contribute to providing a near-limitless supply of donor organs, ideally matched to their recipients, or to repairing damaged lungs.

Cells were more homogeneously distributed across the recellularized lungs raised in the bioreactor, compared with their static counterparts. In the case of C10 epithelial alveolar cells, static conditions yielded poor recellularization results, with abundant cell debris and low RNA compared with an abundance of intact cells cultured in the bioreactor. Both MSCs and C10 cells exhibited lower rates of cell death or apoptosis and higher cell proliferation in bioreactor versus static recellularization conditions.

The authors speculate that biomechanical forces like fluid shear and accompanying changes in oxygenation, nutrient availability and waste dispersal, may contribute to the improved trajectories for cells grown in the dynamic suspension bioreactor system (RWV).

Also, when grown in the RWV, the stem cells expressed phenotypic markers of matrix-producing cells, or fibroblasts. This cell type normally contributes to fibrosis in the lungs of patients with COPD and other lung diseases, leading to the generation of afunctional scar tissue. However, in the context of ex vivo lung regeneration using acellular scaffolds, these fibroblast-like cells could help rebuilding the matrix, which is normally deteriorated due to the chemical treatment. Therefore, the differentiation of stem cells into fibroblast-like cells under dynamic culture conditions in the RWV might generate a microenvironment that is beneficial for other cell types to grow and differentiate into the desired functional lung tissue.

In addition to furthering the immediate goals of the project focused on transplantation, study of decellularized scaffolds also provides a novel means of studying cell-matrix interactions and other aspects of normal and diseased lung biology.  Such studies will advance our understanding of how normal lung tissue becomes fibrotic, with potential for novel strategies to repair damaged lung tissue.

“Imagine, if we can one day create a fully functional normal or fibrotic lung in the lab, understand the reasons why it behaves the way that it does, learn the tipping points that cause it to transition either way, and test how preventative therapies work,” said Nickerson. “The potential findings could have tremendous implications for diagnosis, treatment and prevention for a variety of respiratory disorders, including those due to infectious disease, cancer, and environmental toxins.”

Although years of work and further study remain before such research could be a reality in the clinic, the potential is there and the results to date are promising.