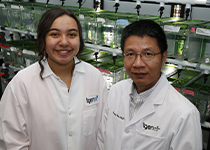 “We at TGen are fortunate to have a student like Teleia with the energy and curiosity to explore new frontiers in investigating cancer,” said TGen Professor Dr. Haiyong Han, describing Teleia Taumanu, a senior at Mesa’s Red Mountain High School, who is one of 100 high school students nationwide receiving a 2017 Emperor Science Award internship.

Teleia Taumanu, a senior at Mesa’s Red Mountain High School, is doing something fishy this summer at the Translational Genomics Research Institute (TGen).

As part of the nationwide 2017 Emperor Science Award program, an initiative designed to encourage high school students to explore careers in science, Teleia will work as a summer intern under the guidance of TGen Professor Dr. Haiyong Han, advancing the study of pancreatic cancer by caring for the laboratory’s experimental zebrafish.

She is one of 100 high school students nationwide receiving awards in the program, which extends the learning and outreach from the PBS documentary, Ken Burns Presents CANCER: THE EMPEROR OF ALL MALADIES A Film by Barak Goodman. The documentary is based on the Pulitzer Prize-winning book by Dr. Siddhartha Mukherjee.

Teleia was searching for a research topic to pursue in class when she happened upon a TED Talk video by Dr. Mukherjee. Combined with the urging of Katy Gaza, a Biotech instructor at her high school, Teleia was encouraged to apply for the Emperor Science Award program, which is presented by Stand Up To Cancer (SU2C), the Entertainment Industry Foundation, and PBS LearningMedia.

“Nearly 1,600 people die each day from cancer, and in spring of 2015 my dearest aunt was one of these people. It is easy to repeat these numbers and hand out these statistics, but perhaps we forget that these numbers are people, and these people have families,” she wrote in her winning application essay.

“The pain of my aunt’s death struck numerous things within me and the crying didn’t stop for months, but it also struck a curiosity,” Teleia wrote. “A curiosity of this disease that demolished her body, robbed her of her youth … a curiosity for its … weaknesses and habits. An ambition for a cure.”

Dr. Han said Teleia would learn about the care and feeding of zebrafish, about the research concepts in studying cancer, and how to form, prove – or disprove – a hypothesis.

“We at TGen are fortunate to have a student like Teleia with the energy and curiosity to explore new frontiers in investigating cancer,” said Dr. Han.

Teleia, 16, already has her own line of inquiry about the workings of the gene p53, whose activation is linked to how cells repair damage to DNA.

“I figured, why not try something a little challenging,” she said. “I plan to continue this research into my senior year of high school.”

The Emperor Science Award program, now in its second year, is committed to helping all students that have a passion for science join the next generation of cancer researchers by pairing them with university-level mentoring scientists to collaborate on an important cancer research project.

“From the outset, it was an important goal for the documentary not only to inform, but also to engage and empower young people to pursue scientific careers, particularly in cancer research,” said SU2C co-founder Sherry Lansing, who led the committee that conceived and implemented the plan for this program.

In addition to working with a cancer researcher mentor, the winning students receive a Google Chromebook and a $1,500 stipend.

About TGen
Translational Genomics Research Institute (TGen) is a Phoenix, Arizona-based non-profit organization dedicated to conducting groundbreaking research with life changing results. TGen is focused on helping patients with neurological disorders, cancer, diabetes, and infectious diseases, through cutting edge translational research (the process of rapidly moving research towards patient benefit).  TGen physicians and scientists work to unravel the genetic components of both common and rare complex diseases in adults and children. Working with collaborators in the scientific and medical communities literally worldwide, TGen makes a substantial contribution to help our patients through efficiency and effectiveness of the translational process. TGen is allied with City of Hope, a world-renowned independent research and cancer and diabetes treatment center. This precision medicine alliance enables both institutes to complement each other in research and patient care, with City of Hope providing a significant clinical setting to advance scientific discoveries made by TGen. For more information, visit: www.tgen.org. Follow TGen on Facebook, LinkedIn and Twitter @TGen.