Sponsored by the Helios Education Foundation, the Helios Scholars at TGen concluded its ninth year today with a daylong scientific symposium, including student poster and oral presentations. Helios Scholars competed at the symposium for awards, recognizing project mastery and presentation skills, and were celebrated for their achievements.

Helios Scholars at TGen is the research institute’s flagship summer internship and research program for Arizona students pursuing careers in bioscience and medicine. Helios Scholars work in TGen’s laboratories — receiving one-on-one mentorship from TGen scientists — as they pursue new discoveries about serious illnesses such as Alzheimer’s disease, infectious diseases and many types of cancer. 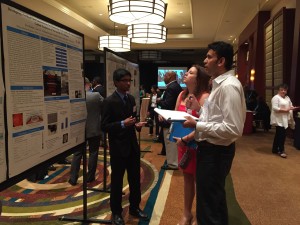 A student at the Helios Scholars at TGen 2015 Symposium presents his poster to judges.

“We are proud to celebrate the accomplishments of the Helios Scholars at our annual symposium,” said Brandy Wells, TGen Director of Public Affairs and Education. “The event serves not only as a showcase for their individual biomedical research accomplishments, but also demonstrates the huge wealth of talent and drive among Arizona students. TGen scientists prepared them with quality mentorship and training so that they will be able to tackle the biomedical challenges of complex human diseases.”

Funded for 25 years through a $6.5 million award from Helios Education Foundation, Helios Scholars at TGen educates, trains, and inspires the next generation of researchers and physicians in Arizona.

“Over the past nine years, we have seen nearly 400 Helios Scholars learn from first-hand experiences in professional scientific laboratories at TGen, helping them prepare for success in college and career,” said Paul J. Luna, President and CEO, Helios Education Foundation. “We are pleased to partner with TGen and are looking forward to next summer’s 10th class of Helios Scholars at TGen, providing them with a stellar summer internship that not only benefits them, but that will improve people’s lives through scientific and medical research.”

The program is open to Arizona high school, undergraduate and graduate level students, including those in medical school. This summer’s ninth class of Helios Scholars at TGen were selected from more than 600 applicants.

Past interns boast an array of impressive accomplishments, publishing scientific abstracts, scientific articles, and acceptance into medical and graduate schools.

Program applications for the 10th class of Helios Scholars at TGen starts in January 2016 at www.tgen.org/intern.

About Helios Education Foundation
Helios Education Foundation is focused on creating opportunities for individuals in Arizona and Florida to succeed in postsecondary education by advancing the academic preparedness of all students and fostering a high-expectation, college-going culture. Through a decade of strategic partnership and investment, Helios has identified Early Grade Success, College and Career Readiness and Postsecondary Completion as the three most critical reform priorities in achieving our long-term goal.  As an engaged foundation, embedded in communities across both states, the Foundation is contributing its expertise and financial resources to better prepare students for college and career and to compete successfully in a global economy. Since 2006, Helios has invested over $155 million in education-related programs and initiatives in Arizona and Florida. For more information about the Foundation, visit www.helios.org.