PHOENIX, Ariz. — July 8, 2020 — A groundbreaking study published today and led by the Translational Genomics Research Institute (TGen), an affiliate of City of Hope, identifies unique lung cells that may drive Idiopathic Pulmonary Fibrosis (IPF), a deadly lung disease that affects hundreds of thousands of Americans, and for which there is no cure.

This is one of the first comprehensive looks at lung cells using a technology called single-cell RNA sequencing. Instead of examining a mash-up of many cells from a tissue sample, single-cell sequencing allowed researchers in this study to closely examine the individual cells that make up the lungs; to identify their function, and ultimately understand the molecular changes that may be driving the disease. 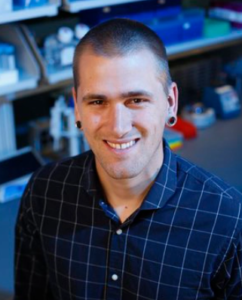 Dr. Nicholas Banovich is an Assistant Professor in the Integrated Cancer Genomics Division at the Translational Genomics Research Institute (TGen). He received his B.S. in Anthropology from Arizona State University and his PhD in Human Genetics from the University of Chicago. Dr. Banovich joined TGen as a senior postdoctoral researcher before transitioning into a professorial position. The Banovich lab is focused on understanding how genetic variation (somatic or germline) within the non-coding portion of the genome alters gene expression levels and contributes to complex disease. While many non-coding variants have been associated with complex disease, understanding how these variants modulate risk remains elusive. This is particularly true in cancer, where the functional implication of non-coding variation remains vastly understudied. Our lab employs functional genomics, computational biology, population genetics, and molecular biology to understand how regulatory changes affect patient outcomes. (Source:TGen)

The study’s initial findings, published today as the cover story for the journal Science Advances, are the first under a combined $6.1 million in federal grants aimed at uncovering the origins of lung disease, including IPF, the nation’s most common and severe form of fibrotic lung disease. An estimated 50,000 Americans, mostly middle-aged and older adults, are diagnosed each year with IPF. Most die from respiratory failure within five years.

Dr. Nicholas Banovich, an Assistant Professor in TGen’s Integrated Cancer Genomics Division and co-senior author of the study, said the most interesting finding is the characterization of cells called KRT5-/KRT17+, which appeared in the epithelium, or protective lining of the lungs, but only in individuals with pulmonary fibrosis.

“These cells are incredibly unique as they are clearly epithelial, but are also producing collagen and components of extra-cellular matrix (ECM), which make scar tissue,” Dr. Banovich said, “They are directly contributing to fibrosis.” These cells also share characteristics of both the airway and alveolar epithelium, the respiratory membrane that allows the exchange of gases.

Another of the study’s most interesting findings is the high degree of plasticity, the ability of a cell to share characteristics with multiple classically defined cell types, in the lung epithelium.

“Classically, the field used a small number of genes to determine cell types. With the single cell RNA sequencing approach, we find that it is often hard to draw a firm line between different types of cells,” Dr. Banovich said. “Instead of thinking of them as discrete cell types, we should think of them more along a continuum, and given the right stimulus, these cells can change their state.”

In addition to the KRT5-/KRT17+ cells, the study identified a cell type marked by the gene SCGB3A2. These cells are similar to club cells — an epithelial cell that lines the airways — yet are found almost exclusively in in pulmonary fibrosis. Unlike other airway epithelial cells, it appears these cells are able to transform into type 1 alveolar cells (AT1) — the cells where oxygen is taken into the body, and through which carbon dioxide is expelled — in an effort to repair damage to the lung.

“In addition to becoming AT1 cells, our results suggest the SCGB3A2+ cells can also become the KRT5-/KRT17+ cells. It actually appears that, during the transformation into AT1 cells, the process is being hijacked and instead of helping repair the lungs these cells are pushed toward this weird pro-fibrotic epithelial cell that continues to drive fibrosis,” Dr. Banovich said.

Two other cells unveiled by the study are distinct subsets of fibroblasts, the cells that form normal connective tissue and scar tissue in the lungs, marked by high levels of the genes PLIN2 or HAS1. These cells are also limited to pulmonary fibrosis.

IPF is a progressive and irreversible disease characterized by a dry cough, fatigue, aching muscles and joints, and ever worsening shortness of breath. IPF and PF both scar and stiffen the interstitium — the delicate lace-like network that supports the lungs’ tiny air sacs. IPF has both genetic and environmental risk, but the exact cause is unknown and current treatments short of a lung transplant only slow disease progression. Lung transplants are radical surgeries that usually require months of waiting for available organs, and often require a long and sometimes agonizing recovery.

The study acknowledges the help of: 10x Genomics and the Chan Zuckerberg Initiative in developing technology optimizations of the single-cell RNA sequencing; and the patients and organ donors who made this work possible.

About TGen, an affiliate of City of Hope

Translational Genomics Research Institute (TGen) is a Phoenix, Arizona-based non-profit organization dedicated to conducting groundbreaking research with life-changing results. TGen is affiliated with City of Hope, a world-renowned independent research and treatment center for cancer, diabetes and other life-threatening diseases: http://www.cityofhope.org. This precision medicine affiliation enables both institutes to complement each other in research and patient care, with City of Hope providing a significant clinical setting to advance scientific discoveries made by TGen. TGen is focused on helping patients with neurological disorders, cancer, diabetes and infectious diseases through cutting-edge translational research (the process of rapidly moving research toward patient benefit). TGen physicians and scientists work to unravel the genetic components of both common and complex rare diseases in adults and children. Working with collaborators in the scientific and medical communities worldwide, TGen makes a substantial contribution to help our patients through efficiency and effectiveness of the translational process. For more information, visit: http://www.tgen.org. Follow TGen on Facebook, LinkedIn and Twitter @TGen.