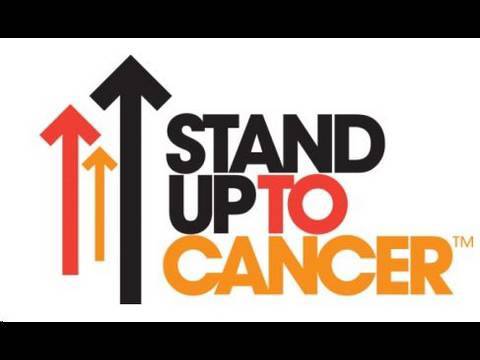 SCOTTSDALE, Ariz. — Sept. 4, 2012 — Physicians and staff from the Translational Genomics Research Institute (TGen) and Scottsdale Healthcare (SHC) will mingle with Hollywood A-listers during the live, primetime television broadcast of the Stand Up To Cancer (SU2C) fundraising telethon on Friday, Sept. 7.

Virginia G. Piper Cancer Center Clinical Trials, a partnership between TGen and SHC, is the only cancer center in the southwest collaborating in SU2C’s Dream Team of researchers working to improve pancreatic cancer treatment.

The SU2C telethon raises funds for cancer research and recognizes the work of its Dream Teams. Stars from movies, TV, the music industry and professional sports will appear on the one-hour, commercial-free program. It airs at 8 p.m. on Sept. 7 on ABC, CBS, FOX, NBC and cable TV networks. More than $180 million has been pledged to SU2C since 2008.

Pancreatic Dream Team researchers are studying how to deprive pancreatic tumors of nutrients — “Cutting Off the Fuel Supply” — by creating individualized treatments with fewer side effects, improved quality of life, and increasing survival for patients with advanced pancreatic cancer.

Pancreatic cancer is the fourth most common cause of cancer-related deaths in the U.S. with nearly 44,000 new cases anticipated in 2012, and more than 37,000 deaths this year. It is one of the most difficult cancers to diagnose and effectively treat.

“There are many clinical trials underway with investigational drugs that may help us advance in the battle against pancreatic cancer. Right here in the Valley, several of these studies are in progress at the Virginia G. Piper Cancer Center at Scottsdale Healthcare,” said Dr. Ramanathan.

“Scientists
in the Stand Up to Cancer team recently found in laboratory studies that the anti-malarial drug hydroxychloroquine can kill cancer cells. A clinical trial is underway at Virginia G. Piper Cancer Center using this agent with standard chemotherapy for patients with advanced pancreatic cancer,” added Dr. Ramanathan.

“These important studies help advance our knowledge about cancer and how to fight it,” he said. Other pancreatic cancer studies now open at Virginia G. Piper Cancer Center Clinical Trials include:

The pancreas is a banana-shaped gland behind the stomach that secretes enzymes into the upper part of the small intestine to help digest proteins, carbohydrates and fats. It also produces hormones, including insulin, which helps regulate the metabolism of sugars.

“If you are diagnosed with pancreatic cancer, you can stand up and beat it. I am a pancreatic cancer survivor,” said Dick O’Neall of Phoenix, who participated in one of the SU2C clinical trials. “I want to say thank you to Stand Up to Cancer and my care team at the Virginia G. Piper Cancer Center.”

Individuals seeking information about eligibility to participate in clinical trials at the Virginia G. Piper Cancer Center at Scottsdale Healthcare can talk to their oncologist or contact the cancer care coordinator at 480-323-1339; toll free at 1-877-273-3713 or via email at clinicaltrials@shc.org.

About Stand Up To Cancer
Produced by the Entertainment Industry Foundation, the SU2C telethon is a star-studded appeal to build public support for groundbreaking translational research accelerating the delivery of new therapies to patients, getting them from the “bench to the bedside” as quickly as possible through collaborations among various institutions across the United States. The commercial-free one-hour SU2C telethon airs simultaneously at 8 pm on Sept. 7 on ABC, CBS, FOX, NBC and cable. Proceeds support research to find effective new treatments for cancer. More than $180 million has been pledged to date.

About TGen
The Translational Genomics Research Institute (TGen) is a Phoenix, Arizona-based non-profit organization dedicated to conducting groundbreaking research with life changing results. Research at TGen is focused on helping patients with diseases such as cancer, neurological disorders and diabetes. TGen is on the cutting edge of translational research where investigators are able to unravel the genetic components of common and complex diseases. Working with collaborators in the scientific and medical communities, TGen believes it can make a substantial contribution to the efficiency and effectiveness of the translational process. For more information, visit: www.tgen.org.