NIH director praises choice of Dr. Carpten to give award lecture on medically underserved and underrepresented at AACR conference Nov. 9 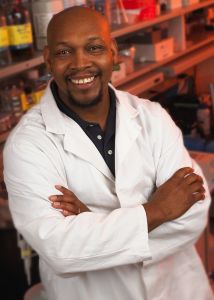 PHILADELPHIA — Nov. 3, 2014 — The American Association for Cancer Research (AACR), the world’s largest cancer research organization representing more than 35,000 investigators, congratulates Dr. John D. Carpten on receiving the 2014 AACR Distinguished Lectureship on the Science of Health Disparities, funded by Susan G. Komen. He will be honored at the American Association for Cancer Research (AACR) conference on The Science of Cancer Health Disparities in Racial/Ethnic Minorities and the Medically Underserved, held Nov. 9-12 in San Antonio. Dr. Francis S. Collins, Director of the National Institutes of Health (NIH), praised the selection of Dr. Carpten: “As NIH Director, this is a double delight — seeing health disparities research get the recognition it deserves, and seeing John Carpten, who I had the privilege of co-mentoring at NIH almost two decades ago, receiving this award. Bravo to John and the AACR.” Dr. Carpten, Deputy Director of Basic Sciences at the Translational Genomics Research Institute (TGen) in Phoenix, is being recognized for his outstanding research focused on understanding the role of biology in the disparate cancer incidence and mortality rates seen among minority populations. He will deliver his award lecture, “Genetics and Genome Sciences in Cancer Health Disparities,” during the opening plenary session, 7:15 p.m. CST Nov. 9 in Texas Ballroom D-E of the Grand Hyatt San Antonio. The 5th annual AACR Distinguished Lectureship on the Science of Cancer Health Disparities, funded by Susan G. Komen, recognizes an investigator whose novel and significant work has had or may have a far-reaching impact on the etiology, detection, diagnosis, treatment, or prevention of cancer health disparities. “I’m humbled and honored by this recognition. However, I am actually accepting this on behalf of all of the amazing scientists, patients, and medical professionals that have contributed to any work that might be deemed mine,” Dr. Carpten said. “I’ve been blessed to work with some of the most outstanding scientists in the world and this award is as much theirs as it is mine. I hope to continue to pursue the purpose that’s been given me to help understand and ultimately improve health outcomes for all people, particularly the underrepresented.”   Dr. Carpten has made a number of seminal discoveries in cancer genetics and genomics. His work has applied high-throughput genomic technologies to discover important genomic alterations in cancer. In addition, he has a strong passion and commitment to understanding cancer etiology among minority populations, which is evident through his leadership role in the African-American Hereditary Prostate Cancer (AAHPC) Study Network. This network was conceived by Dr. Carpten and has become a model for genetic linkage studies in underrepresented populations and was the first to conduct a genomewide scan for prostate cancer susceptibility genes in African-Americans. In addition, his work on multiple myeloma has led to a better biological understanding of the differences in incidence and outcomes seen among African-American patients with multiple myeloma. More recently, his group has discovered a number of single nucleotide polymorphisms, which confer increased risk of developing prostate cancer. He has recently led and co-authored a series of articles describing the roles of genetic variants in prostate cancer risk in Genome Research, Journal of the National Cancer Institute, and New England Journal of Medicine. Dr. Carpten is an active member of the AACR. He is currently a senior editor of Cancer Research, and has previously served as a member of the Minorities in Cancer Research (MICR) Council Committee, chair of the 2010 MICR Scientific Symposium, member of the MICR-Jane Cooke Wright Lectureship Committee, member of the Research Grant Review Committee, and as a member of the editorial board of Clinical Cancer Research. Prior to joining TGen, Dr. Carpten was an investigator with the cancer genetics branch of the National Institutes of Health’s National Human Genome Research Institute. He received his doctoral degree in molecular genetics from The Ohio State University in Columbus. # # # About the American Association for Cancer Research Founded in 1907, the American Association for Cancer Research (AACR) is the world’s oldest and largest professional organization dedicated to advancing cancer research and its mission to prevent and cure cancer. AACR membership includes more than 35,000 laboratory, translational, and clinical researchers; population scientists; other health care professionals; and cancer advocates residing in 97 countries. The AACR marshals the full spectrum of expertise of the cancer community to accelerate progress in the prevention, biology, diagnosis, and treatment of cancer by annually convening more than 20 conferences and educational workshops, the largest of which is the AACR Annual Meeting with over 18,000 attendees. In addition, the AACR publishes eight peer-reviewed scientific journals and a magazine for cancer survivors, patients, and their caregivers. The AACR funds meritorious research directly as well as in cooperation with numerous cancer organizations. As the Scientific Partner of Stand Up To Cancer, the AACR provides expert peer review, grants administration, and scientific oversight of team science and individual grants in cancer research that have the potential for near-term patient benefit. The AACR actively communicates with legislators and policymakers about the value of cancer research and related biomedical science in saving lives from cancer. For more information about the AACR, visit www.AACR.org. Follow us: Cancer Research Catalyst http://blog.aacr.org; Twitter @AACR; and Facebook http://www.facebook.com/aacr.org Press Contact: Lauren Riley 215-446-7155 lauren.riley@aacr.org * About TGen Translational Genomics Research Institute (TGen) is a Phoenix, Arizona-based non-profit organization dedicated to conducting groundbreaking research with life changing results. TGen is focused on helping patients with cancer, neurological disorders and diabetes, through cutting edge translational research (the process of rapidly moving research towards patient benefit). TGen physicians and scientists work to unravel the genetic components of both common and rare complex diseases in adults and children. Working with collaborators in the scientific and medical communities literally worldwide, TGen makes a substantial contribution to help our patients through efficiency and effectiveness of the translational process. For more information, visit: www.tgen.org. Press Contact: Steve Yozwiak TGen Senior Science Writer 602-343-8704 syozwiak@tgen.org