CHANDLER, Ariz — (BUSINESS WIRE) — The Arizona Bioindustry Association (AZBio) today announced that The Honorable Jane Dee Hull, 20th Governor of the State of Arizona will be honored on October 2, 2019 with the AZBio Pioneer Award for Lifetime Achievement at the AZBio Awards.

The AZBio Pioneer Award for Lifetime Achievement is the highest honor awarded by Arizona’s bioscience community and is extended to an Arizonan whose body of work has made life better for people at home and around the world. 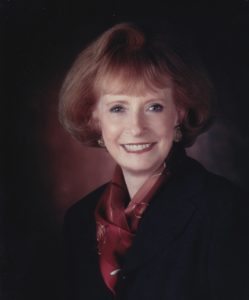 In 2019, we honor The Honorable Jane Dee Hull for the lasting impact her leadership has made on our bioscience industry and the State of Arizona

Looking back over close to six decades, there are many words that describe this incredible woman:  wife, mother, grandmother, teacher, legislator, first woman elected Speaker of the Arizona House of  Representatives, Arizona Secretary of State, 20th Governor of the State of Arizona beginning in 1997,  first woman elected Governor of Arizona in 1998, and public delegate from the United States to the United Nations General Assembly  in 2003.

Each of these roles alone are impressive.  What matters more is the impact of her actions.

In 1997, 10 million children across the United States were without health insurance, many of whom were in working families with incomes just above states’ Medicaid eligibility levels. To address this, the federal government created the Children’s Health Insurance Program (CHIP).  During her first year as governor in 1998, Governor Hull proposed Arizona capitalize on this opportunity to provide KidsCare, an Arizona version of CHIP, to an estimated 60,000 children.  While some opposed the plan, Hull persevered and built a community coalition that got KidsCare to the finish line.  By the year 2000, every state in the nation had implemented KidsCare. The Kaiser Family Foundation reports that 115,400 Arizona children were enrolled in KidsCare in 2017.

A Champion for Education

Jane Hull and her husband Terry moved to Arizona with their four children in 1962.  Terry, a physician, worked for the U.S. Public Health Services Department on the Navajo Nation, while Jane raised the couple’s four children and taught 6th grade English.  They moved to Phoenix in 1964.  In the 1970’s, she became active in politics. She never lost her passion for improving educational opportunities for all Arizonans.

Education 2000, Governor Hull’s plan to invest in our children and in our future, went on the 2000 ballot as Proposition 301.  It asked Arizona voters to make an investment in our schools, community colleges and universities by dedicating an additional 0.6 cent sales tax for education.   As the plan was coming together, there were some who argued that a presidential election year was not the time to run such a big idea.  Hull was not one of them. She believed this initiative was too important to delay. By again bringing people together, she pushed forward and in November of 2000, the people of Arizona passed Prop. 301 creating a 20-year commitment to funding K-12 education, university research, and workforce development programs at Arizona’s community colleges. Over time, Prop. 301 funding has resulted in over $10 billion in Arizona education funding including over $1 billion in University Research funding via the Technology Research Initiative Fund or TRIF.

Arizona’s bioscience sector would not be where it is today without TRIF. The program has funded breakthrough research at our universities, helped to attract and retain world-class researchers who provide educational opportunities for our university students, and supported the expansion of our innovation ecosystem across the state.

In 2018, former Governor Hull joined Arizona Governor Doug Ducey as he signed an extension of Prop.301 that continues this vital funding mechanism through 2041.

The Birth of TGen

On February 7, 2002 an assembly of more than fifty leaders and visionaries in science, medicine, government and business met with Governor Hull at the Arizona state capitol to discuss the possibility of establishing Arizona as a player in the biosciences. Their goal was to set up a one-of-a-kind genomics research institute. This was again an opportunity to rally together for a shared vision into the future. With an unprecedented cooperative spirit, the group rallied to the task of securing support for TGen on the order of $90 million; they achieved this fundraising goal in a five-month window. Less than a year after that initial gathering in the Governor’s office, TGen began operations.

Today the Translational Genomics Research Institute, an affiliate of City of Hope (TGen) conducts groundbreaking research with life-changing results. TGen’s team works to unravel the genetic components of common and complex diseases, including cancer, neurological disorders, infectious disease, and rare childhood disorders.  It anchors the 30-acre Phoenix Biomedical Campus where leaders in biomedical-related research, academic purposes and clinical facilities work together to make life better for people in Arizona and around the world.

What Was, What Is, What Can Be

“Jane Dee Hull has led a distinguished career. Her work serves as an example of what can be accomplished when leaders bring people together to achieve a common goal and make a lasting impact,” stated Joan Koerber-Walker, president & CEO of AZBio. “As we share her story and recognize The Honorable Jane Dee Hull with the AZBio Pioneer Award for Lifetime Achievement, we are reminded of what happens when we pursue our visions secure in the belief that working together as Arizonans, we have, we do, and we can accomplish great things.”

About the AZBio Awards

A key component of Arizona Bioscience Week, The AZBio Awards & Life Science Fiesta brings together Arizona’s life science and leadership community with visitors from around the country to celebrate life-science innovation and innovators.  The  AZBio Awards takes place on the evening of October 2, 2019 at the Phoenix Convention Center. Highlights of the evening will include honoring the honorable Jane Dee Hull, 20th Governor of the State of Arizona with the AZBio Pioneer Award for Lifetime Achievement and a celebration of the achievements of leading researchers, educators, and innovator companies.  The Life Science Fiesta following the award ceremony features a Student Discovery Zone that showcases the work of fifty students from Arizona high schools, community colleges, and universities along with exhibits featuring Arizona companies and patient advocacy organizations.

Arizona Bioscience Week, including the AZBio Awards & Life Science Fiesta,  are presented by AZBio and the Arizona Commerce Authority.

For more information on the 2019 AZBio Awards, visit www.AZBioAwards.com