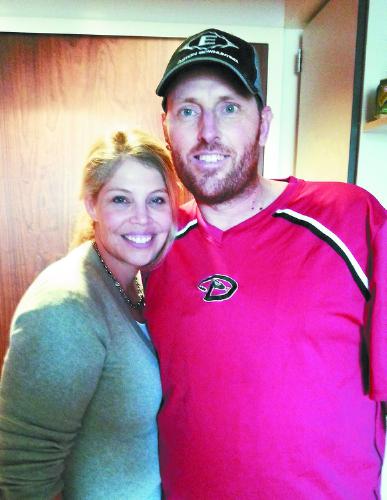 Tiffany and Randy Shepherd are all smiles as Randy looks forward to his hospital discharge after receiving a heart transplant. The SynCardia Total Artificial Heart supported Randy for 15 months as he waited for a matching donor heart. …

Shepherd used the nickname “tin man” in his social media posts because, like the namesake character in The Wizard of Oz, he was in search of a heart.

On April 26, 2014 he was the first person without a human heart to enter and complete the annual 4.2-milePat’s Run that honors slain soldier Pat Tillman. Tillman gave up a lucrative professional football career inPhoenix, Arizona, to enlist in the United States Army. He was killed April 22, 2004, while serving as an Army Ranger in Afghanistan.

Shepherd, 41, had publicly shared his story of living with the SynCardia Total Artificial Heart on the way to a heart transplant. He answered hundreds of questions in a Reddit “Ask Me Anything” segment.

With his human heart, Shepherd will be able to fulfill a desire he expressed in his Reddit discussion. “I am hoping by next year at Pat’s Run I’ll be running it instead of walking it. And I am hoping to have a donor heart.”

“I’m doing well,” Shepherd says following his heart transplant. “What an amazing gift that someone else gave so that I could continue on.”

Shepherd, from Mesa, Arizona, was implanted with the SynCardia Total Artificial Heart on June 20, 2013, after suffering from end-stage biventricular heart failure in which his heart could no longer pump enough blood to sustain his vital organs.

Like a heart transplant, the SynCardia Heart replaces both failing heart ventricles and the four heart valves. It is the only approved device that eliminates the source of end-stage biventricular heart failure.

After he was clinically stable, Shepherd was discharged from the hospital with the Freedom® portable driver, which powers the SynCardia Total Artificial Heart while giving patients nearly unlimited mobility. He wore the 13.5-pound Freedom portable driver in a backpack.

Back at home, Shepherd regained his strength by walking and lifting light weights. He resumed attending church services and doing activities that he and his family enjoyed, including archery and baseball.

He also worked on high-intensity interval routines at the gym. “It really built up my strength,” Randy says, “built up my lung capacity.”

Shepherd will stay in a Tucson apartment for about three months as doctors monitor his health and recovery. His brothers and his wife, Tiffany, will take turns spending time with him.

Tiffany feels support groups helped her to help Randy. She urges others facing what they faced to do the same. “You should join a support group if your partner is a candidate for heart transplant,” she says. “You have to have hope. You have to take care of yourself so you can be there to support your husband. You need support. You can’t do it all alone without other help.”

After he returns to Mesa, Randy wants to treat Tiffany to a San Diego beach vacation. They had long delayed the trip so that they would be close to the hospital when the call came that a donor heart was available.

Other plans include attending Phoenix College in January to resume his studies for a nursing degree. His long-term goals include working for SynCardia Systems, Inc. to help patients prosper with the SynCardia Total Artificial Heart.

Shepherd reflects on his journey from near death to a second chance at life.

“Basically, my life gets to start again,” he says. “With the SynCardia Total Artificial Heart, I wouldn’t have made it past June 2013. I will be forever grateful for that.”

SynCardia Systems, Inc. in Tucson, Arizona is the privately-held owner and manufacturer of the world’s first and only FDA, Health Canada and CE approved Total Artificial Heart.

Originally used as a permanent replacement heart, the SynCardia Total Artificial Heart is currently approved as a bridge to transplant for people suffering from end-stage biventricular heart failure in which both ventricles can no longer pump enough blood for a person to survive.

More than 1,350 implants of the SynCardia Total Artificial Heart accounts for over 400 patient years of life on the device. Since January 2011 more than 400 SynCardia Hearts have been implanted.

SynCardia Systems also manufactures the Freedom® portable driver, which powers the SynCardia Heart while allowing clinically stable patients to leave the hospital to live at home and in their communities. The wearable Freedom driver has been used by over 190 patients, accounting for over 110 years of support.