Thanks to a U.S. Department of Defense contract for as much as $9.5 million, the University of Arizona College of Medicine – Phoenix and partners aim to develop a portable device to easily and accurately detect biological threats, including the virus that causes COVID-19. 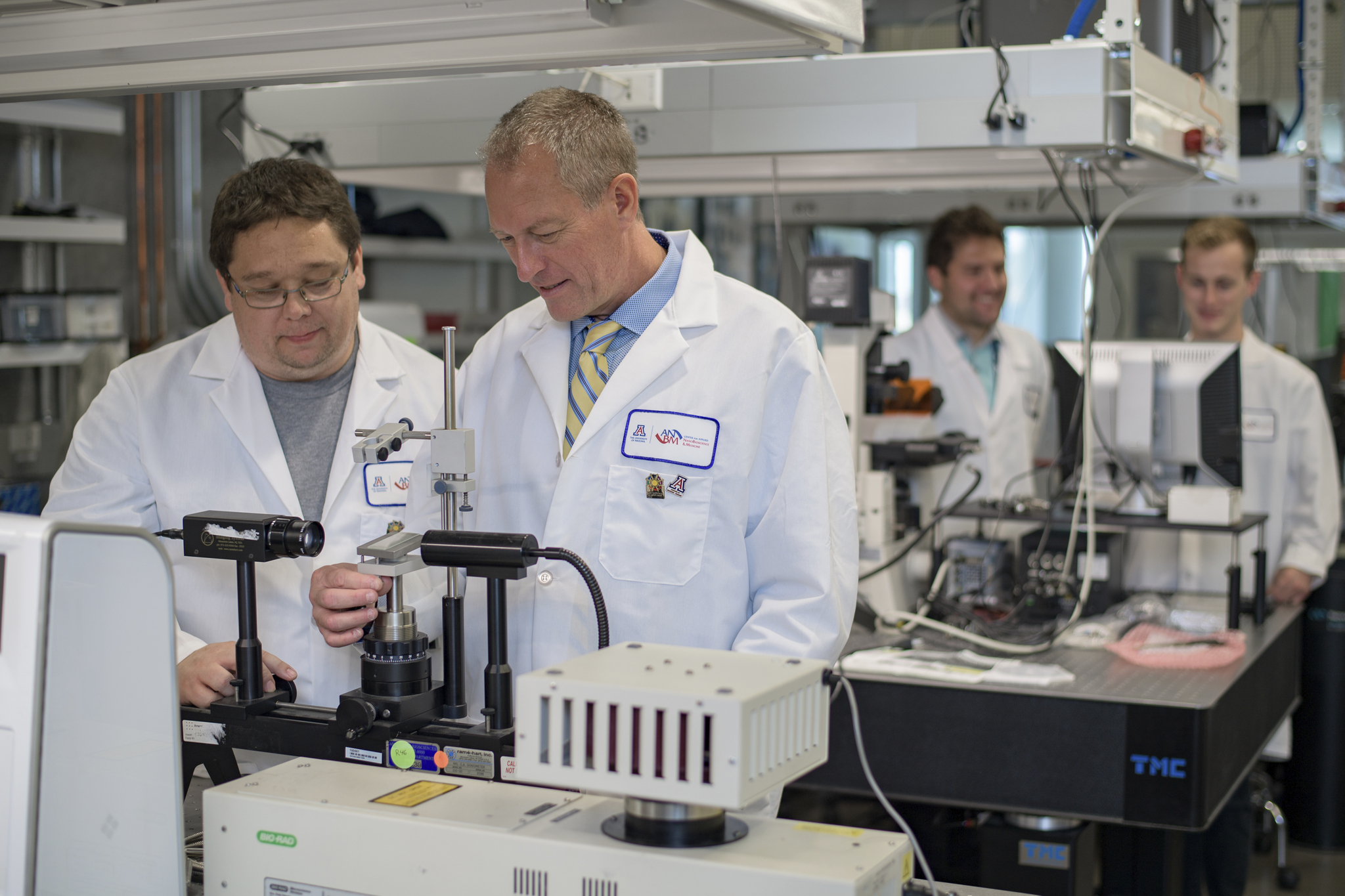 PHOENIX — To better protect individuals serving on the front lines of battlefields or dealing with an event like the current COVID-19 health crisis or potential future pandemics, scientists at the University of Arizona College of Medicine – Phoenix are leading an effort to develop a device for easy, quick and accurate detection of pathogens and biological threats.

The college’s Center for Applied Nanobioscience and Medicine (ANBM) is heading the effort, under an Other Transaction Agreement (OTA) with the Defense Threat Reduction Agency (DTRA), an agency within the U.S. Department of Defense. The agreement is a $9.5 million ceiling contract for three years, to provide about 3,000 devices.

Frederic Zenhausern, PhD, ANBM director and interim co-chair of the Department of Basic Medical Sciences, and his team members, including Associate Professor Jian Gu, PhD, are creating the device in collaboration with scientists from the University of Nevada, Arizona State University, Duke University and Whitespace Enterprises, an Arizona-based startup founded by Dr. Zenhausern. The group is responsible for mass production of the technology.

“An individual in a combat zone or a first responder in the field could know within minutes if they have – or were exposed to – a serious pathogen or biothreat,” Dr. Zenhausern said. “We want the brave individuals serving on the front lines to be safe, and this device potentially could prevent a next pandemic by providing rapid diagnostic testing for a broad range of threats, including coronaviruses.”

The team is developing a vertical flow immunoassay (VFI) diagnostic test that interfaces with a smartphone, as the only system component requiring battery power. Users would take a small finger prick of blood, or a syringe of urine, and then push the liquid onto a test strip. Essentially the device would take a picture of that paper membrane, which would be analyzed and sent back to the users, telling them if they have been exposed to pathogens like anthrax or Yersinia pestis, the bacterium that can cause plague, or other bacteria and viruses.

Two major platforms for microbial diagnostics are available, including polymerase chain reaction (PCR) tests, which look at the nucleic acid molecules of the organism, and antibody or immunoassay testing. The immunoassay test typically is color-coded, like a pregnancy test, and uses a lateral flow immunoassay method that involves a piece of paper upon which biofluid, such as blood or urine, is placed.

The biofluid would migrate along the paper and meet different antibodies to determine if an individual’s body has produced an immune response to the virus, or if antigens could be detected. An antigen is a toxin or other foreign substance that induces an immune response in the body, especially production of antibodies. An interaction then occurs on the paper, signaling whether the individual has been exposed to the biothreat, like a line appearing through the paper.

“Lateral flow immunoassay tests are limited to only a few antibodies and are not very sensitive or fast, but they are inexpensive and safe, which has made it a popular option in the past,” Dr. Zenhausern said. “Through our device, we are combining the benefit of both platforms by increasing capabilities of looking at a much broader panel of disease signatures while significantly increasing the test sensitivity by orders of magnitude.”

A vertical flow immunoassay test is when biofluids go toward and through the paper, not by capillarity along the surface of the test strip. This changes the mechanisms of fluidics and physics, which allows testing to look at multiple biomarkers for a wider range of pathogens, instead of just looking at one target biomarker.

“It’s much faster and more sensitive,” Dr. Zenhausern explained, adding this device would have more capabilities than technology currently available and could be applied to illnesses, such as influenza, Ebola or the COVID-19 threat, or any other biological signature.

“Dr. Zenhausern’s team at the University of Arizona Health Sciences and additional collaborators have worked tirelessly to take this idea from concept to production, and I am grateful for their dedication,” said University of Arizona President Robert C. Robbins, MD. “This research is an incredible example of how University research directly serves the community. By protecting first responders and others who have an increased likelihood of pathogen exposure, including those serving in combat zones, we can improve public health and prevent future outbreaks. I am immensely proud of our faculty who are spearheading this vital work and I am eager to see its impact.”

Dr. Zenhausern said, due to the pandemic, a change in the health-care delivery system will occur. “We will need to have rapid testing that is less invasive and more personalized.”

A previously DTRA-sponsored program successfully established design rules of the proposed VFI platform technology, which will be scaled up for this product-development project. This increase would encompass the U.S. Food and Drug Administration regulatory filing and delivery of thousands of devices. The OTA contract also includes a subsequent production option for future commercialization and possible stockpiling through the Department of Defense.

The OTA program is a partnership among several investigators and their teams, which have been collaborating for many years. These teams are led by world-renowned scientists such as David AuCoin, PhD (University of Nevada Reno); Tuan Vo-Dinh, PhD (Duke University); and Doug Montgomery, PhD (Arizona State University); as well as many industry partners.

The collaboration among most of these institutions began in 2016 after receiving about $2 million in a DTRA contract to study this technology and determine how it could be applied for the detection of Tier-1 bioagents in defense operations.

Founded in 2007, the University of Arizona College of Medicine – Phoenix inspires and trains exemplary physicians, scientists and leaders to optimize health and health care in Arizona and beyond. By cultivating collaborative research locally and globally, the college accelerates discovery in a number of critical areas — including cancer, stroke, traumatic brain injury and cardiovascular disease. Championed as a student-centric campus, the college has graduated 593 physicians, all of whom received exceptional training from nine clinical partners and 2,400 diverse faculty members. As the anchor to the Phoenix Biomedical Campus, which is projected to have an economic impact of $3.1 billion by 2025, the college prides itself on engaging with the community, fostering education, inclusion, access and advocacy. For more information, please visit phoenixmed.arizona.edu (Follow us: Facebook | Twitter | YouTube | LinkedIn | Instagram).

The UArizona Health Sciences is the statewide leader in biomedical research and health professions training. UArizona Health Sciences includes the Colleges of Medicine (Tucson and Phoenix), Nursing, Pharmacy, and the Mel and Enid Zuckerman College of Public Health, with main campus locations in Tucson and the Phoenix Biomedical Campus in downtown Phoenix. From these vantage points, Health Sciences reaches across the state of Arizona, the greater Southwest and around the world to provide next-generation education, research and outreach. A major economic engine, Health Sciences employs nearly 5,000 people, has approximately 4,000 students and 900 faculty members, and garners $200 million in research grants and contracts annually. For more information: uahs.arizona.edu (Follow us: Facebook | Twitter | YouTube | LinkedIn | Instagram).