Researchers from the UArizona College of Medicine – Tucson found that inhibiting heat shock protein 90 in the spinal cord enhanced effectiveness of opioid therapy and could decrease its side effects. 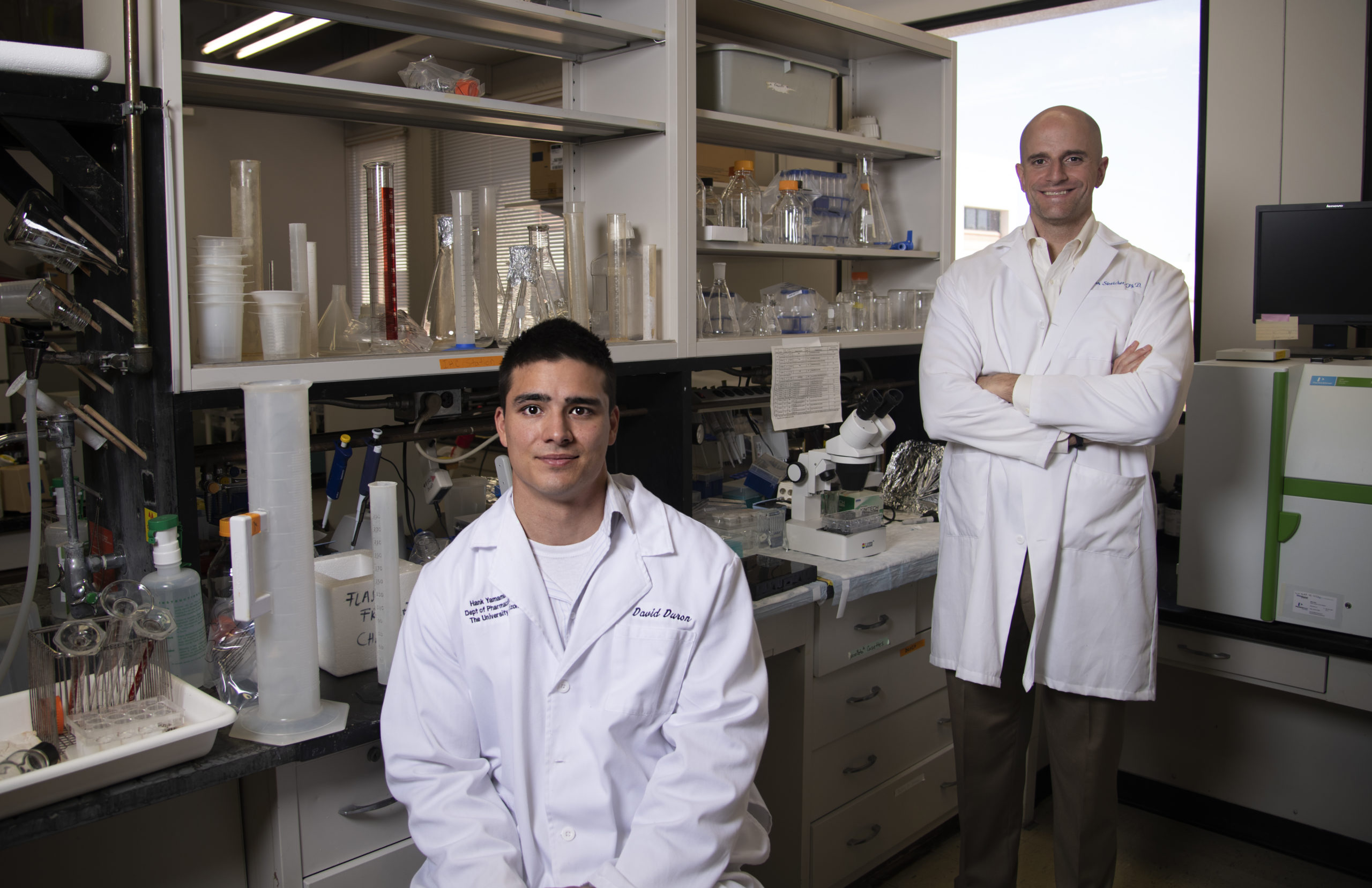 TUCSON, Ariz. – Opioids are one of the most effective treatments for chronic pain, in spite of the fact that their worst side effects have created a national health care crisis.

A potential solution to the high-risk use of opioids was discovered recently by University of Arizona Health Sciences researchers, who found that inhibiting a key protein in signaling pathways in the spinal cord enhances the effectiveness and presumably decreases the side effects of opioid therapy.

John Streicher, PhD, a Department of Pharmacology assistant professor in the UArizona College of Medicine – Tucson, and graduating doctoral student David Duron, PhD, focused their research on one specific protein – heat shock protein 90 (Hsp90) – and its role in receptor activation and pain relief.

The findings suggest Hsp90 inhibitors could give doctors the opportunity to implement a dose-reduction strategy for patients. Less opioid drug could be prescribed, but patients would get the same levels of pain relief while experiencing lower side effects.

When an opioid such as morphine enters the body, it binds to a protein target called the m-opioid receptor (MOR) and launches a series of effects known as a signaling cascade. As signaling molecules work their way downstream, some cause positive effects, such as pain relief. Others result in negative side effects, such as: respiratory depression, which can cause death; reward, which can lead to addiction; and tolerance, which can increase the quantity of drug needed to provide the same amount of pain relief.

“Our overall research program is looking at the signaling links between receptor activation and pain relief downstream, and one of the proteins in the middle that we’ve been studying for a number of years is called heat shock protein 90,” Dr. Streicher said. “Heat shock protein 90 does a lot of things, but one thing it does is regulate how that receptor talks to the downstream changes in your brain, like pain relief.”

In an earlier study, Dr. Streicher and his team examined the role of Hsp90 in MOR signal transduction – the cell’s conversion of a signal into a response – in the brain in mice. When Hsp90 was inhibited, morphine’s antinociceptive properties were blocked – in other words, it lost its ability to reduce the sensation of pain.

Drs. Duron and Streicher decided to see if Hsp90 functioned similarly in the spinal cord. To their surprise, it did not.

“Initially, we somewhat expected that it would be similar to the brain, at least at the signaling level,” said Dr. Duron, who is first author on the paper. “We found that it actually has an opposite effect, which was very surprising.”

When Hsp90 was inhibited in the spinal cord, morphine’s pain-relieving effects were amplified.

“When we found these effects in the spinal cord, my ‘a-ha moment’ was realizing that this could potentially be something that could have an application in the clinic,” said Dr. Duron, who hopes to begin law school this fall and pursue a career in intellectual property and drug-discovery law.

The prospects for developing a clinical Hsp90-inhibitor drug are promising, as several cancer researchers are studying Hsp90 inhibitors and demonstrating strong proof-of-concept in the lab. Still, approval by the U.S. Food and Drug Administration is likely years away.

“The opioid crisis stems from a lot of factors, but one of the primary factors is that we have a real chronic pain problem in the U.S.” Dr. Streicher said. “There are over 100 million people with some sort of chronic pain. For especially those people with moderate to severe pain, opioids are often the only efficacious options they have. So, we have a lot of people in pain, a lot of those people are still going to need to take opioids. Finding new ways to treat people’s pain without them getting addicted to some sort of pain-relieving drug is by far one of the most effective ways we have to fight the opioid crisis.”

About the University of Arizona College of Medicine – Tucson

The University of Arizona College of Medicine – Tucson is shaping the future of medicine through state-of-the-art medical education programs, groundbreaking research and advancements in patient care in Arizona and beyond. Founded in 1967, the college boasts more than 50 years of innovation, ranking among the top medical schools in the nation for research and primary care. Through the university’s partnership with Banner Health, one of the largest nonprofit health care systems in the country, the college is leading the way in academic medicine. For more information, visit medicine.arizona.edu

The University of Arizona Health Sciences is the statewide leader in biomedical research and health professions training. The UArizona Health Sciences includes the Colleges of Medicine (Tucson and Phoenix), Nursing, Pharmacy, and the Mel and Enid Zuckerman College of Public Health, with main campus locations in Tucson and the growing Phoenix Biomedical Campus in downtown Phoenix. From these vantage points, the Health Sciences reaches across the state of Arizona and the greater Southwest to provide cutting-edge health education, research and community outreach services. A major economic engine, the Health Sciences employs nearly 5,000 people, has approximately 4,000 students and 900 faculty members, and garners $200 million in research grants and contracts annually. For more information: uahs.arizona.edu