TUCSON, Ariz. – A researcher at the University of Arizona College of Pharmacy has identified four compounds that block the viral replication cycle of SARS-CoV-2, the pathogen that causes COVID-19, providing a promising starting point for further development of potential treatments for this devastating disease.

For several years, Jun Wang, PhD, assistant professor of pharmacology and toxicology, has been studying respiratory viruses, including Influenza A and B. His expertise in antivirals allowed him to quickly transition some of his laboratory resources to focus on new projects, seeking to speed up the drug-discovery efforts to combat COVID-19. 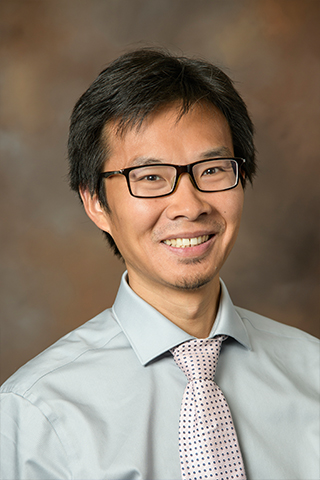 Jun Wang, assistant professor of pharmacology and toxicology, The University of Arizona

“Given our promising preliminary data, we are applying structure-based drug design to further optimize the existing compounds to push the efficacy to the limit,” Dr. Wang said.

The primary function of a virus is to replicate by interacting with a host cell. Viral infections are caused when a virus introduces its genetic materials into the cells of its host, “hijacking” the cell’s internal machinery to make more copies of itself. During viral replication, a virus will express a number of proteins, each one playing a different role in the replication cycle. By blocking or inhibiting any one of these proteins the virus loses the ability to replicate, effectively stopping it in its tracks.

In his laboratory team’s study, Dr. Wang focused on finding compounds that inhibited the viral main protease (Mpro), an attractive drug target among coronaviruses because of its essential role in the viral replication cycle. Inhibiting the activity of this enzyme blocks viral replication, preventing the virus from infecting more cells, spreading to a new host and making more people sick.

“It’s just like a car – to run smoothly, every part of the car needs to function properly,” Dr. Wang explained. “If you take out any one key part, the car will stop. This is the same way antivirals work.”

In addition, GC-376, an investigational veterinary drug for treatment of feline infectious peritonitis in cats, also showed promising antiviral activity against SARS-CoV-2 as well as displaying favorable interactions between the body and the drug. Having already demonstrated efficacy in animal-model studies, this compound is ready to be tested in relevant SARS-CoV-2 animal models.

Dr. Wang’s team now is working to find collaborators who can help evaluate the efficacy of both Boceprevir and GC-376 in animal models. As his team waits, his laboratory is exploring the potential for developing their own similar – yet distinct – molecules to test against SARS-CoV-2.

Dr. Wang also is working with Tech Launch Arizona, the commercialization arm of the UArizona that helps move innovations from idea to lab to market, to help patent use of these compounds against SARS-CoV-2.

Learn more about this invention here: Bioactive Compounds for Use in Inhibiting SARS-CoV-2 Viral Replication.

This project was partially funded by NIH/NIAID grant R01-AI147325.

About the University of Arizona College of Pharmacy
The University of Arizona College of Pharmacy is the premier pharmacy college in the Southwest, and one of the top in the nation, focused on drug discovery, toxicology, pharmaceutics, health outcomes and sciences, pharmaceutical education and research through interprofessional training and collaborative public/private partnerships. Preparing pharmacists and pharmaceutical scientists in undergraduate, professional, graduate and post-doctoral programs, the college embraces an entrepreneurial spirit, providing tailored educational opportunities to broaden students’ experiences. Established 72 years ago as the first health sciences college at UArizona, the college has a long history of improving science and health, both in Arizona and around the world. It is currently ranked No. 8 among the nation’s 143 colleges of pharmacy by the American Association of Colleges of Pharmacy. For more information: pharmacy.arizona.edu