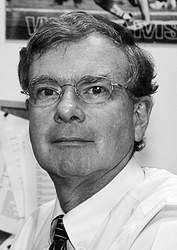 VisionGate, Inc. today announced the appointment of Dr. David Wilbur as Medical Director of its Phoenix-based CLIA laboratory, VisionGate Biosignatures Laboratory (VBL). A world-renowned pathologist, Dr. Wilbur comes to VisionGate from Massachusetts General Hospital (MGH), where he has been a practicing pathologist since 2001. He headed the Cytopathology Unit until 2011, when he took over the Pathology Department’s efforts in the emerging area of digital pathology and teleconsultation. He is also Professor of Pathology at Harvard Medical School.

With interests in clinical cytology, digital pathology and computerized cell analysis and automation, Dr. Wilbur has been leading cutting-edge clinical digital pathology implementation at MGH. For several years, he also has been a consultant to VisionGate, providing final review and confirmation of all clinical cases utilizing VisionGate’s 3D cell imaging platform, the Cell-CT®. He has also authored VisionGate’s recent clinical and scientific publications.

“After serving as a pathologist in a clinical setting for most of my career, I am very excited about joining VisionGate to help accelerate the impact of its game-changing, non-invasive LuCED® test for lung cancer as well as its chemoprevention drug Iloprost®,” VisionGate Medical Director Dr. David Wilbur said. “I’ve had the pleasure of working as a consultant to VisionGate for several years – reviewing hundreds of cases and thousands of cell images that VisionGate’s Cell-CT generates in 3D. It’s truly a ground-breaking technology that can help eradicate not only the world’s deadliest disease – lung cancer — but other cancers as well.”

For students studying cytology, Dr. Wilbur’s name may be especially familiar. In addition to being the co-editor of the 3rd and 4th editions of Comprehensive Cytopathology, he also authored multiple chapters in the textbook, and over a hundred scientific papers on cytology and cancer-related topics. Dr. Wilbur has practiced pathology at more than 10 hospitals and has taught at the University of Rochester and the University of Connecticut, along with Harvard. He’s served on several editorial boards including Cancer Cytopathology, Archives of Pathology and Laboratory Medicine, and CytoJournal. He’s also received the President’s Honor, Lifetime Achievement and Outstanding Service Awards from the College of American Pathologists. He is a past president of the American Society of Cytopathology.

“As VisionGate prepares to enter the marketplace, Dr. Wilbur will provide his extensive expertise and leadership in pathology to the VBL,” VisionGate Founder and CEO Alan Nelson, PhD, said. “We so appreciate his longstanding technical and clinical guidance, and are thrilled he could join us here in Phoenix to oversee the day-to-day operations of the VBL. Dr. Wilbur will help bring VisionGate’s LuCED lung cancer test to the global market. With his leadership, we will be able to provide an early, life-saving diagnosis for patients who have lung cancer and preventive treatment to those at risk for lung cancer.”

VisionGate, Inc. is led by Dr. Alan Nelson, physicist, bioengineer and serial entrepreneur who previously developed the world’s first and only automated screening test to detect cervical cancer, marketed globally today as FocalPoint by Becton Dickinson. VisionGate’s proprietary LuCED®, test is a non-invasive diagnostic test for detection of early-stage lung cancer, demonstrating exquisite sensitivity and specificity in blinded clinical studies. This physician-ordered, take-home sputum test is processed on the world’s first automated 3D cell imaging platform, the Cell-CT®, named aptly because it is similar in principle to taking a CT scan of individual cells, but using visible light without harmful radiation. Moreover, with the exclusive patent license from the University of Colorado for the drug called Iloprost, VisionGate will drive the therapeutic market for chemoprevention of lung cancer and, ultimately, the eradication of this pervasive killer. With 166 issued patents in 13 countries, VisionGate expects to play a leading role in the battle against the world’s number one cancer killer.