University of Arizona, Cox Communications Team Up for Fifth Annual Family-Friendly Event to Inspire All Ages 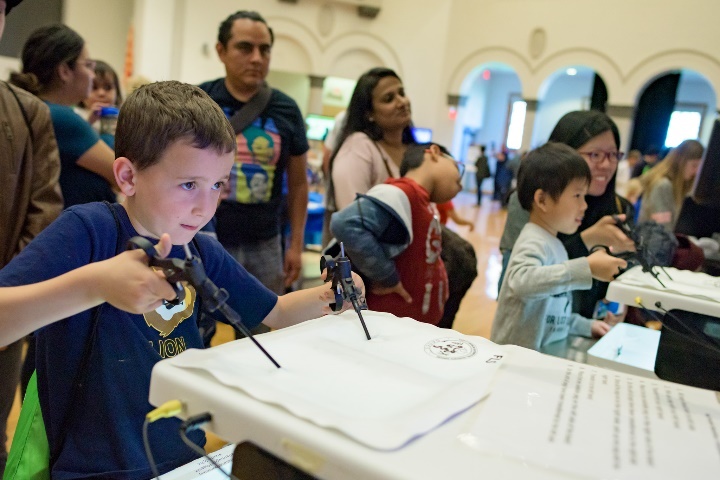 Image Courtesy of the UA College of Medicine-Phoenix

More than 9,000 children and parents met robots and Ghostbusters, tried their hand at robotic surgery, played with planets, walked through a giant colon and had fun learning about science, technology, engineering, math and medicine at the fifth annual Connect2STEM at the University of Arizona College of Medicine – Phoenix campus in downtown Phoenix.

“Nothing represents an investment in STEM and an investment in the future of Arizona than right here at the Biomedical Campus in the heart of downtown Phoenix,” Stanton said. “So many young people will visit the medical school for the first time today and say, ‘That could be me as a future doctor, surgeon, nurse or physician assistant.’ That’s what Connect2STEM is all about.”

Sponsored by the University of Arizona in partnership with Cox Communications, Connect2STEM is the kickoff for the Arizona SciTech Festival, a month-long campaign promoting science events across the state.

Tim Duenas, an electrical engineer, brought his four kids to the event to show them “engineering-type stuff.” They loved the robots, he said, and their favorite was the activity that extracted DNA from a strawberry, hosted by the University of Arizona’s Graduate Women in Science.

Trent Smith, MD, a clinical assistant professor and head of the Division of Rheumatology at Banner – University Medical Center Phoenix, came with his children as well.

“It’s really exciting to see my kids light up, and for them to realize that there is life beyond math and science in the classroom,” he said. “I’m excited about dissecting eyeballs. My kids wanted to play video games, but I convinced them that the eyeballs were far better.”

It was the first time attending Connect2STEM for Pamela Garcia-Filion, PhD, MPH, a research scientist and associate professor in the Department of Biomedical Informatics at the UA College of Medicine – Phoenix, and she was happy to see parents just as engaged as the youngsters.

“This a really great opportunity to broaden the knowledge and appreciation of just how far science goes and how it’s used every day,” she said. “The real success of Connect2STEM is that while we’re targeting kids, one of the byproducts is that we’re reaching the adults. I think that’s fantastic.”

The cornerstone of the College of Medicine – Phoenix exhibit was a vast simulation room where children learned from medical students how to intubate a realistic, high-fidelity mannequin, take vitals, perform ultrasounds, perfect their CPR technique and practice surgery skills with the da Vinci surgical robot. Kids clustered around cow eye and pig heart dissections led by medical students. At the Wildcat Play Hospital, little ones gave their stuffed animals checkups with help from UA College of Nursing students.

The daylong event featured exhibitors from all three of the state’s universities, including the Northern Arizona University Physical and Occupational Therapy programs and Arizona State University’s Graduate Association of Interdisciplinary Neuroscience Students.

Sheldon Caldwell-Meeks, senior community relations specialist for Cox, said his company continues to support Connect2STEM because “parents come back to tell us time and time again that they are so thankful for an event that is free and that is so hands-on.”

“It gives children an opportunity to touch and see things they might not have exposure to in their daily life,” he said. “What kid can sit behind the da Vinci machine and do a surgery like a real surgeon? That’s mind blowing. Our goal is to inspire children so they can one day see themselves in a STEM career.”

Connect2STEM is organized by the UA College of Medicine – Phoenix

The University of Arizona College of Medicine – Phoenix admitted its inaugural class of first-year medical students in August 2007 and currently has 332 students training to be physicians. The College inspires and trains exemplary physicians, scientists and leaders to optimize health and health care in Arizona and beyond.  The College of Medicine – Phoenix is uniquely positioned to accelerate the biomedical and economic engines in Phoenix and the State by leveraging vital relationships with key clinical and community partners. For more, visit phoenixmed.arizona.edu.