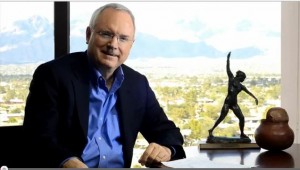 Harry A. George has more than 38 years of experience in founding, operating and investing in successful rapid growth technology-related companies and was awarded an honorary Doctor of Science degree from the UA Eller College of Management.  He was recognized at the UA for serving on the board of the Arizona Center for Innovation and was a member of the advisory committee of the MBA program at the Eller School of Business for six years. George also is chair of a TREO task force developing an entrepreneurial economic blueprint for Tucson.

A longtime  leader on Arizona’s capital landscape, Harry co-founded Solstice Capital in 1995. Solstice is a venture capital fund that invests in early-stage life science, information technology and clean-tech companies. Solstice is currently managing its second fund ($57 million) and has invested in a total of 44 companies since inception.

Previously, from 1981 to 1989, George was co-founder, director and vice-president of finance for Interleaf Inc. During this time, Interleaf, a pioneer in electronic publishing, grew to be a publicly traded company with $100 million in annual revenue.

In January 2000, Interleaf was acquired by Broadvision in a stock merger that valued Interleaf at approximately $1 billion. Prior to this, George was a co-founder, director and vice president of finance of Kurzweil Computer Products, subsequently purchased by Xerox Imaging Systems in 1980.

Harry George has worked as a director of 26 private and public companies and is currently a director of Calimmune, High Throughput Genomics (where he serves as chairman), Lumidigm, Medipacs, Post.Bid.Ship, Rehnu, Syncardia and Tempronics. He has been active with the Arizona Venture Capital Conference, and its successor, Invest SW, and served on their conference screening panels since 1997. He also is one of the founders of Tucson’s Desert Angels.

We could go on and on about Harry’s leadership and work in our community, but instead we reached out to some of the leaders who work with him…

“Harry George is a true driving force behind the development of the bioscience business environment in Arizona.  He played a crucial and critical role in the growth of Regenesis, not only by investing capital into the Company, but also as an engaged and impassioned Board member. Through his tutelage, Regenesis has grown into a significant company within Arizona and in our marketplace nationally.”

“’Harry George’ and ‘venture capital’ are synonymous terms in Arizona.  Harry’s personal impact on the growth of the biosciences in southern Arizona in particular has been profound.”

“Harry has been invaluable to Calimmune, and a dear friend for many years.  His discipline and integrity in business is only matched by his passion to support his community.  We congratulate Harry on his special honor.  He is simply a Tucson treasure!”

“Harry is one of a kind. The best combination of generous,smart, driven and kind. He makes us all better just by being himself.”

— Michael Garippa, CEO, President and Chairman of the Board, SynCardia Systems, Inc.

“Tenacity and intellect are the hallmarks of Harry’s venture capital toolbox.  We’ve been institutional co-investors in numerous companies over the past 20 years.  Harry works every angle….and simply won’t let a company fail!  We have been blessed to share some wins together and I learn something new from Harry at every meeting.  He is a teacher/mentor to many….and richly deserves the academic recognition as a PhD.  Well done,UniversityofArizona!”

“Congratulations Harry and thank you for all you have done to move our Arizona Bioscience Industry forward faster.”