It’s not every day that you get the chance to sit down face-to-face with a Nobel Laureate. But that’s exactly what happened on Tuesday, April 22, 2014, when about 150 Arizona biotechnology movers and shakers shook it up with Leland “Lee” Hartwell, PhD, at the AZBio Leadership Conversation luncheon at the Phoenix Country Club. 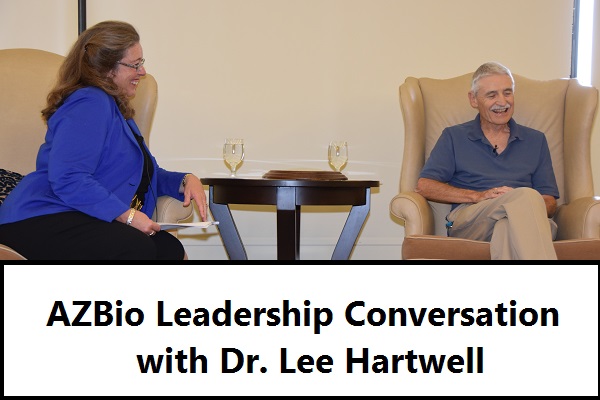 Click here to view the full conversation with Dr. Hartwell at AZBio.TV

Hartwell was awarded the Nobel Prize for Physiology or Medicine in 2001 for discoveries of protein molecules that control the division of cells. His work provided important clues to the cause of cancer, which emanates from abnormal, uncontrolled cell growth. In keeping with his broad view of the world and the important impact that health has on everything we do, Hartwell’s commentary covered everything from kindergarteners to cancer. By the end of the conversation, the room was abuzz with palpable energy and people were percolating with more than just a few good ideas.

During the hour-long conversation, rumination became reality when AZBio President and CEO Joan Koerber-Walker asked Hartwell what he would do if he had a billion dollars. Hartwell’s response put the Arizona collaborative gene on full display: “I would gather a bunch of smart people and have a workshop.” From Hartwell’s point-of-view, the possibilities are limitless. And in Koerber-Walker’s estimation, her billion dollar question wasn’t wishful thinking. Stepping down from the stage, Koerber-Walker was already plotting details for a future workshop.

Hartwell came to Arizona State University (ASU) in 2010 to lead an effort to address two of today’s top concerns: improving the effectiveness of health care while reducing its costs, and advancing science education. Hartwell grounded his conversation in the four priorities that are guiding his work today as chief scientist at the Center for Sustainable Health at ASU’s Biodesign Institute:

“As the world population ages, we are faced with an increasing number of people debilitated by chronic diseases,” he explained. “The costs of healthcare, as we currently practice it will become unsustainable. It is less expensive and more effective to prevent disease or identify it early.”

Hartwell spoke of the need for more resources to make this happen, but also of his optimism: “A good example is the cost of DNA sequencing for cancer. Five to 10 years ago, getting our DNA sequenced cost about $100,000. Today, it costs about $10,000. In a year or two it will cost about $1,000.”

Hartwell explained that he has found inspiration for some of his work in the aviation industry’s process of Reliability Centered Maintenance (sensor monitoring), in which sensors on every part of a plane scan for distress signals to divert disaster. “It is now 100,000 times safer to travel by air than car,” he said. “We aren’t quite there yet,” he said, explaining that wearable devices are taking us swiftly in that direction.

Clinical validation becomes important, he said, in moving ideas more quickly to market. “We’ve identified thousands of biomarkers, but very few get validated because it’s hard,” he said. “You have to have the right patient, with the markers, with the right metrics and monitoring in order to get to validation.” The Center’s Project HoneyBee  initiative is actively engaged in validating  wearable biosensors to improve health outcomes at reduced cost.

With the explosion of information comes the quandary of how to get information to the people who need it – the patients and their physicians. “We don’t know how to deliver information effectively or how to help sort information from misinformation,” he said. “How do we make technical information understandable and useful to people who aren’t in the field?”

To demonstrate how information can change behavior, Hartwell asked the audience if anyone drove a Prius. When hands went up, he said, “and I bet you have become obsessed with gas mileage,” pointing to the fact that there’s a continuous information display available to the driver.

In a question-and-answer session, Koerber-Walker asked about the potential impact of genetics on increasing the effectiveness of drugs. Hartwell explained that though progress has been made, it has been especially challenging to apply the science to chronic disease. “The biggest challenge in all of human health is that we are all different from one another,” he said, noting that with lab animals, what works for one often works for all others due to the similarity in their genetic structures.

In response to a question about cultivating young people as scientists, Hartwell said, “They are presented with a world where they have infinite possibilities, so we need to make education as interesting as Facebook.” To do so, he explained we need to take a market research approach to understand what interests them, what turns them on and what catches their attention. Hartwell also spoke of his enthusiasm for the Citizen Science movement, saying, “that there local problems that can be solved at the community level by gathering the right information. School kids love the hands-on approach. They can do this.”

Continuing with his focus on the next generation, Hartwell came up with a compelling answer when Koerber-Walker asked him what he thought Arizona could do to distinguish itself in bioscience and techology: “Make health education the focus of education,” he said.

Koerber-Walker took up the theme, recollecting the President’s Physical Awards under Presidents Kennedy and Johnson. “Healthy people learn better,” she said. “Healthy people are more productive; healthy people pay more taxes; they grow companies; they contribute more; they build more. Good health is not a cost, but an investment in the future”

Hartwell holds the Virginia G. Piper Chair in Personalized Medicine and has served as executive chairman of the Arizona-based Partnership for Personalized Medicine (now named the Center for Sustainable Health) since its inception in 2007. The Partnership includes the Biodesign Institute, Translational Genomics Research Institute (TGen) in Phoenix and Seattle’s Fred Hutchinson Cancer Research Center, where Hartwell was formerly president and director.

By Dianne Price for AZBio

Dianne Price is a local freelance journalist/blogger and communications strategist who specializes in sharing information about health, medicine and the sciences. She is a regular contributor to Brain World, a national magazine that explores cutting-edge science and how its findings can affect human health, culture, education, global issues and more. She is always looking for the next great story in Arizona and can be reached at Price Communications Group, 269-806-2266, dianne.price@rocketmail.com or http://www.linkedin.com/in/dianneprice/

View the full set of Leadership Conversation photos by Mark Goldstein at Facebook.com/AZBIo

Click here to view the full conversation with Dr. Hartwell at AZBio.TV