Dr.  Andrew Lettes of Pueblo Magnet High School in Tucson has been selected by the National Science  Teacher  Association as the recipient for the 2012 Ron Mardigian Biotechnology Explorer Award sponsored by BioRad.   Lettes was selected from a field of applicants for his exemplary science teaching skills and his contributions to enhancing the biotech curriculum as the TUSD lead bioscience teacher and as facilitator for the JTED advisory board.

The award will be presented during the NSTA National Conference at the NSTA Teacher Awards Gala on Friday, March 30, 2012 in Indianapolis. 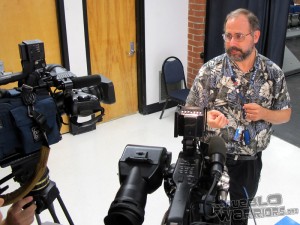 This biotechnology teacher spends countless hours pursuing industry internships, educational experiences with post-secondary institutions and service learning opportunities for his students encouraging them to participate in programs like the University of Arizona’s Keep Engaging Youth in Science (KEYS) Internship, and the Summer Institute on Medical Ignorance.

The quality of Lettes’ instruction and the passion he has for science is manifested in the high achievement levels of his students.

“Every teacher holds the key(s) to open a student’s mind to the wonders of education, and facilitates the path for students to become lifelong learners” shared Lettes.  “My career change from research scientist to high school science teacher was one of my best decisions.”

No stranger to being singled out  as a great example of teaching excellence, Dr. Lettes has won countless awards including  the Michael A. Cusanovich Bioscience Educator of the Year in 2010 from AZBio and the Science Foundation Arizona Innovation Heroes Award which recognizes teachers who are shining examples of innovation in STEM learning.  He was also named the 2007-2008 Outstanding Biology Teacher of Arizona by the National Association of Biology Teachers, was a finalist for the U of A/Circle K Outstanding High School Educator Award for 2007-2008, nominated for the 2008-2009 Arizona Bioindustry Association’s Bioscience Educator of the Year Award, and was accepted to participate in the prestigious National Biotechnology Institute Teacher-Leader Program for 2009 and 2010.  He was also recently selected as a fellow for the University of Arizona’s Biodiversity from Molecules to Ecosystems (BIOME) program in 2010 and 2011.