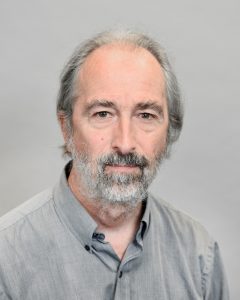 Photo Caption: For his pioneering work in the field of mechanisms of evolution at the gene, genomic, cellular and phenotypic levels, Michael Lynch, PhD is being honored with the 2022 Arizona Bioscience Pioneer Award for Lifetime Achievement.

Michael Lynch, director of the Biodesign Center for Mechanisms of Evolution at Arizona State University, has been awarded the 2022 Arizona Bioscience Pioneer Award for Lifetime Achievement. The award is the highest honor given by Arizona’s bioscience community and is extended to an Arizonan whose body of work has made life better for people at home and around the world.

Lynch will receive the award from the Arizona Bioindustry Association (AZBio) at the 2022 AZBio Awards ceremony Sept. 28, held at the Phoenix Convention Center. AZBio is the only statewide organization focused exclusively on growing Arizona’s bioscience industry.

The AZBio Awards ceremony celebrates Arizona’s leading educators, innovators and companies. Each year, the organization honors bioindustry leaders from across the state of Arizona who represent the depth, breadth and expertise of the bioscience industry.

Michael Lynch uncovers mechanisms of evolution at the gene, genomic, cellular and phenotypic levels, paying special attention how mutation, random genetic drift and recombination affect evolution, using methods ranging from molecular to mathematical approaches. He is the director of the Biodesign Center for Mechanisms of Evolution at Arizona State University and professor in the ASU School of Life Sciences.

His pioneering research has many practical applications. These include investigations of the mechanisms influencing mutation rates and other intracellular error rates, the emergence of antibiotic resistance, organismal responses to climate change, and the development of new methods of biomass production.

Lynch leads the world on research involving the foundational issues in evolutionary theory and explores the intricacies of cell structure and function. One of his primary objectives is to integrate evolutionary theory with cell biology, using principles from population genetics and biophysics. He is a major force in the development of neutral theories in which varying population sizes of different lineages influence mutation rates and guide the way in which genome architectures are ultimately structured.

Such research has helped expand the discipline beyond the purely adaptive explanations of genes and evolution that have dominated the field since Charles Darwin. His quantitative and theoretical insights on the mechanisms of evolution are illuminated by laboratory investigations of a range of organisms, including the microcrustacean Daphnia, the ciliate Paramecium and many diverse microbial species. To advance the emergent field of evolutionary cell biology, with major support from the National Science Foundation, Lynch and ASU colleagues Wayne Frasch, Kerry Geiler-Samerotte, Ke Hu, and Jeremy Wideman recently formed the Biological Integration Institute on Mechanisms of Cellular Evolution,.

“I’m especially grateful to ASU and the Biodesign Institute in providing an optimal setting for our work and that of my colleagues. Without their generous support this award would not have been possible,” Lynch says.

Professor Lynch won the 2022 Genetics Society of America Thomas Hunt Morgan Medal for his far-reaching and influential contributions to science. The award, one of the most prestigious in the field of genetics, is granted in honor of an individual member’s exceptional lifetime accomplishments as well as history of dedicated mentorship to fellow geneticists. The Thomas Hunt Morgan Medal is only the most recent in a string of prestigious awards earned by Lynch, which includes the Lifetime Contribution Award from the Society for Molecular Biology and Evolution, bestowed in 2021.

Lynch is a member of the U.S. National Academy of Sciences and a fellow of the American Academy of Arts and Sciences. He has also served as president of the Genetics Society of America; the Society for Molecular Biology and Evolution; the Society for the Study of Evolution; and the American Genetics Association. Previously, he has held faculty positions at the University of Illinois, University of Oregon, and Indiana University.

In addition to over 300 publications, including many highly acclaimed papers, Lynch has written a two-volume treatise on quantitative genetics with Bruce Walsh, a professor of genetics at the University of Arizona. The first volume (1998) focuses on the genetics and analysis of quantitative traits, and the second (2018) on the evolution of quantitative traits. He presented his views on the evolution of genome structure and sequences comprehensively in his 2007 book “The Origins of Genome Architecture.” He is currently extending these ideas to the cellular level in “Evolutionary Cell Biology,” expected to be published in late 2022.

Past recipients of the AZBio Pioneer Award for Lifetime Achievement include: Gordon Steere for his legacy in developing the Medtronic Tempe Campus; Roy Curtiss, III, Ph.D. of the Biodesign Institute at Arizona State University for pioneering work in the fields of immunology and vaccine development; David S. Alberts, M.D., Director Emeritus at the Arizona Cancer Center; Raymond L. Woosley, M.D., Ph.D., Chairman Emeritus of the Critical Path Institute; George Poste, DVM, DSc, PhD, FRC Path, FRS, industry pioneer and founding director of the Biodesign Institute at Arizona State University; Jeffrey Trent, Ph.D., Head of Extramural Research on the Human Genome Project, founding President and director of the Translational Genomics Research Institute (TGen), Daniel D. Von Hoff, M.D., of TGen and the HonorHealth Research and Innovation Institute, a pioneer and world leader in translational medicine and in accelerating novel drug discoveries from the laboratory to cancer treatments in clinical trials;  Gholam Peyman, M.D., the inventor of LASIK surgery,  Marvin Slepian, M.D., medical device innovator and founding director of the Arizona Center for Accelerated Biomedical Innovation, University of Arizona; Thomas M. Grogan, M.D., pioneer in the field of digital pathology and founder of Ventana Medical Systems, Inc.; and  The Honorable Jane Dee Hull, the Arizona Governor whose vision and commitment were instrumental in setting Arizona on the path to become a leader in health innovation.