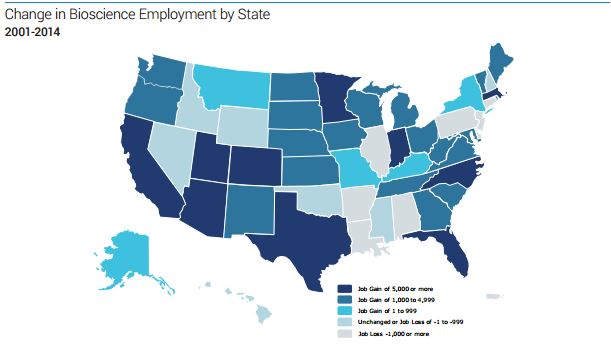 San Francisco, CA (June 7, 2016)— The Value of Bioscience Innovation in Growing Jobs and Improving Quality of Life 2016, a report released today by the Biotechnology Innovation Organization (Bio) shows increased employment within the U.S. bioscience industry for the last four consecutive years.  The report also shows impressive bioscience industry strength and resilience, with employment growth of nearly 10 percent since 2001.  The BIO media release with summaries of key report findings can be accessed here.

The report also contains summaries by state of the key metrics that indicate and drive growth of this vital industry.

As calculated by TEConomy Partners for BIO, Arizona’s bioscience and healthcare industry included 1,284 business establishments and 24,040 employees in 2014.

Four of the state’s five bioscience subsectors have contributed to its 2 percent overall employment gain since 2012, led by double-digit job growth in medical devices (up 11 percent).

State academic institutions accounted for nearly $400 million in bioscience-related R&D expenditures in 2014 and NIH funding to these and other non-academic institutions totaled $150.6 million in 2015. Arizona inventors have had 1,751 patents issued in bioscience-related classes since 2012, primarily in medical and surgical devices but also in drugs and pharmaceuticals, microbiology and genetics, and in biochemistry.

The state has seen a strong increase in venture capital invested in bioscience-related companies in recent years but still lags national averages and its population peer group.

Arizona by the Numbers:

Arizona’s Population Peer Group is made up of states with population ranging from 5 – 7 million people. (AZ, CO, IN, MD, MA, MN, MO, TN,WA, WI)  By comparing to similarly situated states, Arizona can compare key metrics and economic drivers to determine where strategic public and private investments may have the greatest economic impact.

“Arizona’s research organizations, life science innovator companies, and leading healthcare systems are working together with a single focused goal of improving the quality of life for people here in Arizona and around the world,” shared Joan Koerber-Walker, president & CEO of the Arizona Bioindustry Association (AZBio).

“We are recognized nationally as a top-emerging bioscience state thanks in a large part to the results we have generated from focused investments made both privately and publicly over the last 15 years. Now is our opportunity as a state to leverage those investments and to build upon them for maximum economic impact today and in the future.”

This week at the BIO International Convention, we are focusing on Arizona Opportunities in its biotechnology sector in the Arizona Pavilion,” shared Koerber-Walker.  “BIO 2016 is the perfect place for us to share our story with the global life science community. The next step is to show them.  That’s why we are inviting everyone to join us for Arizona Bioscience Week this September and see for themselves.”

Arizona Bioscience Week will provide an opportunity for researchers, life science entrepreneurs and life science investors to come together to connect and engage  so that together they can build new collaborative partnerships that can benefit people today and for generations to come.  Beginning on September 18, 2016, Arizona will host a series of events including the Cavendish Global Impact Forum to showcase its leadership advantages in precision medicine and in the quest to help people with neurodegenerative disease.  A boot camp for biotech entrepreneurs will be hosted by Life Science Nation.  The AZBio Awards will celebrate life science innovators and will include honoring industry icon Dr. George Poste with the AZBio Pioneer Award for Lifetime Achievement.  The White Hat Life Science Investor Conference will showcase privately held companies in the diagnostic, medical device, health IT and therapeutic sectors from across the Rocky Mountain Southwest region.

A key component in Arizona’s life science ecosystem, the Arizona Bioindustry Association (AZBio) is the only statewide organization exclusively focused on Arizona’s bioscience industry.  AZBio membership includes patient advocacy organizations, life science innovators, educators, healthcare partners and leading business organizations. AZBio is the statewide affiliate of the Biotechnology Innovation Organization (BIO) and works in partnership with AdvaMed, MDMA, and PhRMA to advance innovation and to ensure that the value delivered from life-changing and life-saving innovation benefits people in Arizona and around the world.

Resources for the media: