Roy Curtiss III, a scientist at the Biodesign Institute at Arizona State University, has been selected as the 2014 recipient of the Lifetime Achievement Award from the American Society for Microbiology (ASM). 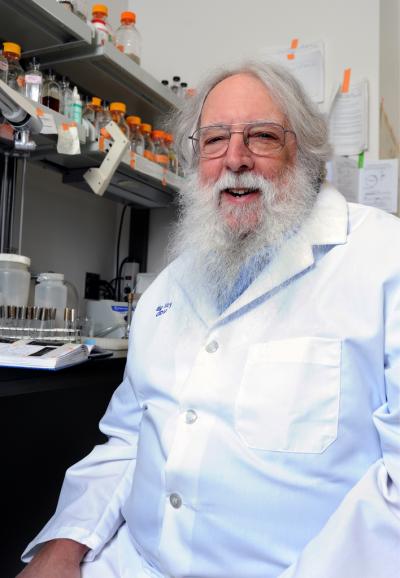 Roy Curtiss, Director of the Biodesign Institute’s Center for Infectious Diseases and Vaccinology.

Roy Curtiss, Director of the Biodesign Institute’s Center for Infectious Diseases and Vaccinology.

“During his career, Roy Curtiss has had a profound impact on the discipline of microbiology,” said Dr. John Young, Chair of the ASM Lifetime Achievement Award Selection Committee. “He was a pioneer at the start of the recombinant DNA era, developing safe E. coli strains that could be used for gene cloning. He has also uncovered novel aspects of bacterial pathogenesis and used this information to develop attenuated Salmonella-based vaccines that are effective against a myriad of human pathogens.”

“Roy’s achievements and lifelong dedication to life science research, education and innovation are remarkable,” said Biodesign Institute Executive Director Dr. Raymond DuBois, M.D., Ph.D. “His fundamental work on microbial pathogenesis coupled with a passion to tackle the dire challenges of combatting infectious diseases in the developing world make him a stellar example of the translational research mission of the Biodesign Institute.”

Winners of ASM’s Lifetime Achievement Award are a small and select group— Curtiss is only the 20th member to receive the distinction. “I was stunned to be included in this group of awesome scientists,” said Curtiss, Director of Biodesign’s Center for Infectious Diseases and Vaccinology and Professor of Life Sciences in the School of Life Sciences at ASU.

Curtiss stresses that microorganisms have had a profound effect on his career as well as on all earthly life. “We derive all of our energy from bacteria that invaded early cells maybe 2 billion years ago—the mitochondria. All photosynthesis is due to bacteria invading early plant cells,” he says.

Of course, microbes have a notorious dark side as well, accounting for a staggering 35-40 percent of all human deaths every year. Critical issues of human health, in the U.S. as well as the developing world have been an ongoing preoccupation for Curtiss: “We have a horrible problem with antibiotic resistance, drug resistance in influenza and HIV—so developing vaccines to prevent those diseases is a major focus of my endeavors as I continue my life of research.”

Curtiss was drawn to ASU President Michael Crow’s vision of a New American University and a state-of-the-art research enterprise, the Biodesign Institute, which opened in 2004. Shortly after arriving at ASU, Curtiss received the largest grant of his career, a $14.8 million grant from the Grand Challenges in Global Health initiative, funded by the Bill and Melinda Gates Foundation. (The project was supplemented the following year with another $631,000.)

Curtiss has led an international research project to develop a new vaccine to be administered needle-free to newborns and infants to combat pneumonia, a leading cause of death, especially in the developing world. The single-dose, oral vaccine against bacterial pneumonia promises to outperform the existing injectable vaccine in terms of safety, affordability, ease of distribution and effectiveness. Preliminary studies have been successful, and moved the vaccine technology forward to human clinical trials.

In the Curtiss lab, orally deliverable vaccines for fish, poultry, swine, cattle and humans are now being developed to protect against a broad range of pathogenic invaders. These include:Streptococcus pneumoniae causing pneumonia, Mycobacterium tuberculosis causing tuberculosis, Yersinia pestis causing plague, human gut pathogens such as Salmonella, E. coli and Shigella as well as influenza and hepatitis B viruses.

Curtiss has demonstrated the power of such vaccines to stimulate a robust immune response, conferring protective immunity to bacterial, viral and parasitic infectious disease agents. “It’s now become clear that we can use these microbes in other ways against diseases like inflammatory bowel disease, Crohn’s disease or even in therapies for cancers of different types—both lymphomas and solid tumors,” he says.

Curtiss enjoys a reputation as a trailblazer for investigating the genetic basis of bacterial infection and is recognized as one of the world’s outstanding figures in the field of vaccinology. His dramatic career began at an early age.

“One of the things that got me interested in biology and science was moving from New York City to Upstate New York, where we had a backyard and a place for a garden. My father taught me how to put seeds in the ground,” he recalls. “In the fall, I had a huge sunflower that I took to the Albany Flower Show and I won my first blue ribbon— at age 5.”

Soon, new questions began to intrigue the young scientist, sparking an early fascination with the genetics of vegetables like tomatoes and their resulting distinctive colors and later, the inheritance of plumage colors in chickens. “I just kept asking questions, exploring new areas.”

After honing his skills in the breeding of chickens, Curtiss took first place in the New York State 4-H Chicken of Tomorrow contest in 1950. For his winning entry, he produced a White Cornish-White Plymouth Rock cross. The genetic background of this bird represents 95 percent of the chickens currently raised and consumed for food in the U.S., something Curtiss takes great pride in. In later years, he would develop a broad range of vaccines to protect poultry and other animals from a variety of infectious diseases, particularly Salmonella infections in broilers and laying hens.

In addition to talent and hard work, Curtiss attributes a long list of milestones in microbiology to his knack for being in the right place at the right time and fostering relationships that would shape his highly varied career.

Roy Curtiss III was born in New York, May 27th, 1934. He became absorbed with microbiology in high school, when he began testing for Salmonella in poultry. After graduation, he pursued his early fascinations more rigorously, researching the physiology of Salmonella and other bacteria as well as entities that infect and replicate within bacterial hosts—known as bacteriophages (bacterial viruses).

Curtiss received his undergraduate degree in agriculture from Cornell University, Ithaca, N.Y., in 1956. There, he was a member of Quill and Dagger, a legendary collegiate senior honor society reserved for outstanding student leaders.

The early experience of attending the Cold Spring Harbor symposium in 1956 was a formative one for the young researcher. “That was the beginning of the era of molecular biology. The phage group had only 30 or 40 people. Six of these people went on to get Nobel prizes,” he says. “To be surrounded by a small group of eminent scientists exchanging ideas, arguing and discussing biology was just phenomenal.”

Curtiss went on to receive his Ph.D. in microbiology from the University of Chicago in 1962, and quickly advanced in leadership roles at a number of major American Universities. At the University of Tennessee at Oak Ridge, Curtiss carried out a variety of roles from 1962 to 1972, including Lecturer in Microbiology; Interim Director of the Graduate School of Biomedical Sciences; Group Leader, Microbial Genetics and Radiation Microbiology Group, Biology Division. During this time, he also spent three years as an elected member of the Oak Ridge City Council.

From 1978-1983, Curtiss taught and conducted research at the University of Alabama-Birmingham, where he was Charles H. McCauley Professor of Microbiology, Director of the Molecular Cell Biology Graduate Program, Senior Scientist in the Comprehensive Cancer Center, Senior Scientist in the Institute of Oral Biology and Founder and Director of the Cystic Fibrosis Research Center (and Acting Chairman, Department of Microbiology in 1982).

Prior to his appointment in 2004 to ASU’s School of Life Sciences, and the Biodesign Institute, Curtiss worked at Washington University in St. Louis, where he chaired the Biology Department for more than a decade, earning the title of George William and Irene Koechig Freiberg Professor of Biology in 1984.

Today, Curtiss marvels at the huge expansion of the field of microbiology since his early days. “It’s a much more complex society and enterprise we’re engaged in today. There are 40,000 members of the ASM, which is one of the largest biological science organizations in the world.”

Concerning Curtiss’ active role in the microbiology community, ASM Selection Committee Chair Young adds: “Roy has performed exemplary service to ASM, serving as an effective spokesperson and promoting the field of microbiology on the international stage. He is also a renowned mentor and has trained numerous talented young scientists who have gone on to become international leaders in their fields.”

In addition to recognizing Curtiss’ significant research contributions in many areas of microbiology, the ASM award acknowledges his lengthy list of major publications and numerous patents. Notwithstanding his superlative achievements, Curtiss shows no signs of slowing down. “My life isn’t over yet…and I’ve still got lots to do!”

A ceremony honoring Curtiss will take place at the ASM General Meeting Awards Banquet and Dinner on Sunday, May 18, 2014 in Boston, Massachusetts. There, he will present the ASM Lifetime Achievement Award lecture.