U.S. Senator Jon Kyl will be honored with the AZBIo Centennial Award on October 23,  2012 at the Phoenix Convention Center as thanks for his leadership and service to the people of Arizona and innovators across the country. 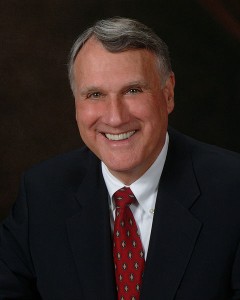 As Arizona celebrates its Centennial, we honor Arizona Senator Jon Kyl for his dedication and service to both our industry and the people of our state with the 2012 AZBio Centennial Award.

Senator Kyl is serving his third and final term in the U.S. Senate after previously serving for eight years in the U.S. House of Representatives. He was elected unanimously by his colleagues in 2008 to serve as Republican Whip, the second-highest position in Senate Republican leadership.

Senator Kyl serves on the Senate Judiciary Committee, where he has played key roles in the confirmation of John Roberts as chief justice of the U.S. Supreme Court, and of Samuel Alito as associate justice. As a member of the Judiciary Committee, he has also helped write the landmark Crime Victims Rights Act, as well as important provisions of the Patriot Act, the Military Commissions Act, and other anti-terrorism laws.

As a member of the Finance Committee, he has been chief advocate of death-tax repeal and other pro-growth tax policies, including low tax rates on income, capital gains, and dividends. He has also been a strong proponent of step-by-step solutions for health-care reform that can improve access, lower costs, and preserve the sacred doctor-patient relationship.

The Wall Street Journal wrote in February 2011 that Senator Kyl “has made his mark the old fashioned way – by knowing what he is talking about.” The New York Times, in a February 2012 piece, called Kyl “the emissary of the Republican leadership, a gatekeeper of conservatism, and a bridge between his party’s most ardent conservatives and more pragmatic centrists.” TIME magazine recognized Senator Kyl as one the “World’s 100 Most Influential People” in 2010, and as one of the 10 best senators in 2006. Capitol Hill’s newspaper, The Hill, identified him as one of the “25 hardest working lawmakers.”

Born in Oakland, Nebraska, Kyl received both his bachelor’s and law degrees from the University of Arizona. He graduated Phi Beta Kappa and was editor-in-chief of the Arizona Law Review. He and his wife Caryll have two children, Kristine Kyl Gavin and John Kyl, and seven grandchildren.