A Robust Bioscience Industry with Strong Prospects for Growth

While not immune to the economic crisis and resulting recession, the bioscience industry weathered difficult economic times better than most industries, and is on course to regain its previous high employment levels. Indeed, the promise of bioscience-based solutions to global grand challenges in human health, food security, sustainable industrial production and environmental protection provides an optimistic picture for the biosciences as a key economic development engine in the U.S.

In this sixth biennial report, Battelle and BIO continue the tradition of reporting national and state statistics for the bioscience industry in the U.S. Returning for this edition are bioscience metrics for leading U.S. metro areas.

The latest Battelle/BIO data indicate that:

How does Arizona Measure Up?

According to the report,

How do we compare? 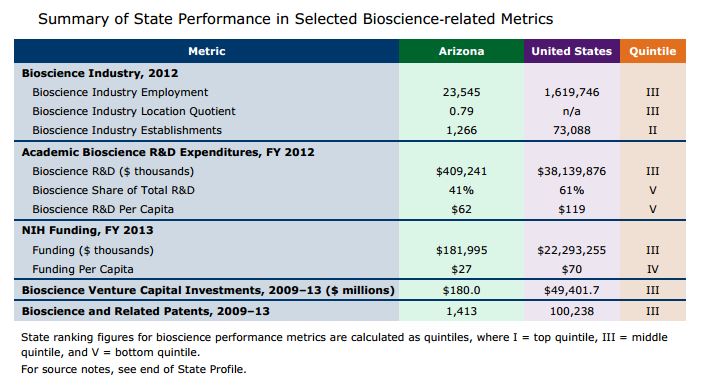 The good news in these numbers is that Arizona has moved up in the number of Bioscience Establishments from a Tier III to a Tier II.  However, our employment rank is still at Tier III.

Our greatest opportunities for raising our employment rankings can be found in raising our levels of investment and R&D expenditures.  This is the driver of both our innovation pipeline and the corresponding job growth and increased economic impact.

Opportunities to Move Up The Rankings

AZBio and its partners across the state are already in process on proactive initiatives to address tge underlying growth drivers.  Here are a few examples:

Arizona is positioning itself to be a global bioscience leader in the years to come.  Now is our opportunity to step up our strategic actions  and investments and move up the ranks.