A decade ago, a young, vibrant research university, in partnership with people from the nation’s sixth largest metropolitan area, in the youngest state in the contiguous U.S., embarked on an ambitious initiative to launch a bioscience endeavor unlike any known before: The Biodesign Institute. By using the foundational blueprints of Nature’s grand designs, our talented researchers have pushed the frontiers of knowledge and advanced research and discovery to make a major impact on our community, nation and the world.

On October 10, 2014, The Biodesign Institute at Arizona State University celebrated ten years of research, innovation and teamwork with employees, community supporters and partners.  To share more with community on an ongoing basis, they also launched a new information site – NEXTEN (next-ten) which celebrates a decade of achievements
and invites the viewer to “peer ahead with us into Biodesign’s bright future.”

Features of the site include:

All of us at AZBio congratulate the Biodesign team on this, their 10th “birthday”. We applaud you for the impact you have made for the people of Arizona and for people across the world and we look forward to working with you as you forge ahead to an even brighter future. 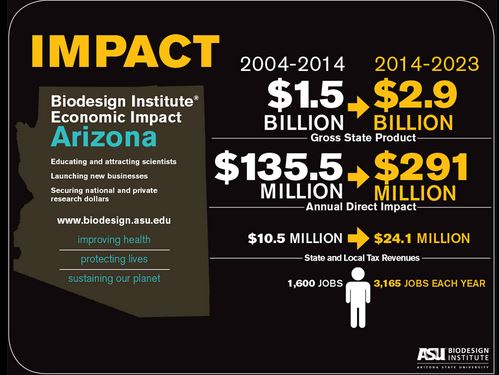