Dr. Glen Weiss presents ‘Lung Microbiome’ study of those with and without lung cancer at the 16th World Conference on Lung Cancer 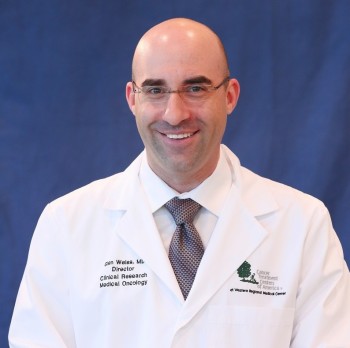 A study of the microbes that inhabit human lungs and how they may relate to the development of lung cancer, led by Cancer Treatment Centers of America® (CTCA) at Western Regional Medical Center (Western) in Goodyear, Arizona, was presented on September 8, 2015 during the 16th World Conference on Lung Cancer (WCLC) in Denver.

Dr. Glen Weiss, Director of Clinical Research and Medical Oncologist at CTCA® at Western presented the study abstract at today’s WCLC poster session on Biology, Pathology and Molecular Testing.The human body consists of multiple “microbiomes,” each of which is inhabited by various kinds of microscopic organisms, or microbes, including many different types of bacteria.

In this study, Analysis of lung microbiome from patients undergoing bronchoscopy, Dr. Weiss and his team, including collaborators at Northern Arizona University (NAU), sought to characterize the microbes that inhabit the lung microbiome. They examined bronchial lavage samples from 22 patients with lung cancer and 17 individuals without lung cancer.

“Characterization of lung microbial communities may not just serve as a predictor of cancer development, but also as a target of pharmacological cancer prevention strategies,” said Dr. Weiss, M.D., M.B.A., a physician-scientist, who not only provides patient care in the clinic, but also is intricately involved in pioneering biomedical laboratory research and discoveries.

“We sought to characterize the lung microbiome diversity within patients with cancer, specifically those with lung cancer, compared to those without lung cancer,” said Dr. Weiss, the study’s first author.

In this study, a significant portion of the bacterial community found in the patients’ lungs was Streptococcaceae family of bacteria, which contains a variety of species, some of which cause disease in humans and animals, while others are important in the manufacture of certain fermented products.

More than 9,000 delegates from across the globe attended the WCLC, one of the largest international gatherings of clinicians and scientists in the field of lung cancer and thoracic malignancies. The program covered a wide range of disciplines, including more than 300 invited talks and 3,000 scientific abstracts presented in oral and poster sessions.

Delegates included those interested in all aspects of lung cancer, including surgeons, medical oncologists, radiation oncologists, pulmonologists, radiologists, pathologists, epidemiologists and basic research scientists, with special sessions for nurses, allied health professionals and advocacy members. The WCLC convention is sponsored by the International Association for the Study of Lung Cancer (IASLC).

Dr. Weiss, who recently was nominated for the second year in a row as AZ Business magazine’s Researcher of the Year, also is an author of three other study abstracts related to new drug treatments that will be presented at WCLC.

Dr. Weiss currently supervises more than 30 clinical trials involving hundreds of patients. The clinical research and clinical trials program at CTCA at Western has grown exponentially under his leadership.  Since its inception in 2012, patient enrollment in treatment trials at CTCA at Western has increased by more than 800 percent. So far in 2015, the hospital exceeded the national average for adult patients participating on research studies by about 300 percent.

Dr. Weiss earned a medical degree from Sackler School of Medicine in Tel Aviv, Israel. He completed an internal medicine residency at SUNY-Downstate in Brooklyn, New York. He went on to finish a hematology/medical oncology fellowship at the University of Colorado Health Sciences Center in Aurora, serving as the Chief Fellow in his final year. He also earned a Masters in Business Administration from the W.P. Carey School of Business at Arizona State University.

Prior to joining CTCA, Dr. Weiss served as Director of Thoracic Oncology and Associate Clinical Investigator with the Virginia G. Piper Cancer Center at HonorHealth (formerly Scottsdale Healthcare). He is a Clinical Associate Professor and Co-Head of the Lung Cancer Unit of the Cancer and Cell Biology Division at the Translational Genomics Research Institute (TGen) in Phoenix, as well as Clinical Associate Professor at the University of Arizona College of Medicine-Phoenix. Dr. Weiss also served a four-year elected term as Chief Medical Officer of the CRAB Lung Cancer Research Team (formerly Clinical Trials Consortium).

Board certified in medical oncology, Dr. Weiss has completed numerous clinical trials with investigational agents, a few of which have gone on to receive FDA approval for certain cancers.

Dr. Weiss has published more than 230 peer-reviewed articles and abstracts in journals such as New England Journal of Medicine, Journal of Clinical Oncology, Clinical Cancer Research and Journal of Thoracic Oncology. He is on the editorial board of Cancer Medicine, Integrative Cancer Science and Therapeutics, and Integrative Molecular Medicine and has served as an ad hoc reviewer for more than 10 science and medical journals. Dr. Weiss is also proud to have mentored a number of students over the years on laboratory or clinical research projects, with at least eight moving on to pursue medical degrees or Ph.D. degrees in science. He has given over 50 invited lectures both nationally and internationally, including in Mexico City, Mexico; Seoul, Korea; Rehovot, Israel; Orleans, France; Vienna, Austria; and Budapest, Hungary.

About Cancer Treatment Centers of America

Cancer Treatment Centers of America, Inc. (CTCA) is a national network of hospitals focusing on complex and advanced stage cancer. CTCA offers a comprehensive, fully integrated approach to cancer treatment and serves patients from all 50 states at facilities located in Atlanta, Chicago, Philadelphia, Phoenix and Tulsa. Known for delivering the Mother Standard® of care and Patient Empowerment Medicine®, CTCA provides patients with information about cancer and their treatment options so they can control their treatment decisions. For more information about CTCA, go to www.cancercenter.com.